We are entering the heart of earnings season, and it may be a wild one because Wall Street’s own outlook is quite poor.

The consensus Wall Street estimate for Q2 profits of the S&P 500 is that they will fall by 5.6% on a year-over-year basis. That would be, by the way, the fifth quarter in a row of falling corporate profits.

The retail industry is particularly vulnerable, as evidenced by a parade of retailers that previously reported disappointing results and/or are warning that the rest of the year will be even worse. In the month of May, retail sales shrunk by 3.9%, worsening from a 2.9% drop in April.

Moody's Investors Service not only lowered its estimates for 2016 retail sales, but also its outlook for the industry as a whole from “positive” to “stable”:

“We have scaled back our growth and outlook expectations for the US retail industry primarily due to weakness in four sub-sectors: apparel and footwear, discounters and warehouse clubs, department stores and office supplies.”

Bank of America, which knows a thing or two about credit card usage, said its aggregated data of Bank of America debit cards and credit cards showed particular weakness in four retail areas:

There are many places to point your finger for the discouraging retail results, but one of the more surprising culprits may be that a growing number of Americans just can’t afford it.

According to America’s Research Group (ARG), more than 20%, or 26 million Americans, are simply too poor to shop.

These working poor work an average two to three jobs and pull in less than $30,000 of annual income. 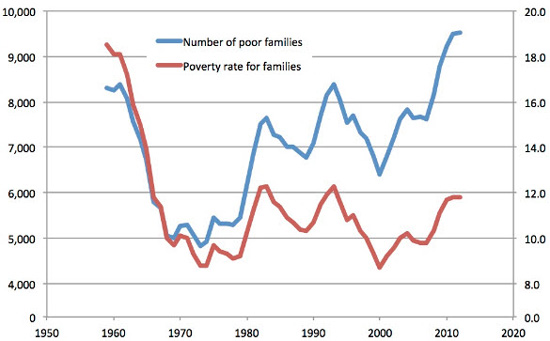 Even those fortunate enough to make more than that are struggling. Nearly half of all Americans have not seen an increase in salary over the last five years, and another 28% have seen their take-home pay reduced by higher medical insurance deductions.

As a result, “The poorest Americans have stopped shopping, except for necessities,” said Britt Beemer of America’s Research Group.

It gets worse—even finding money to pay for necessities is a struggle. 47% of Americans wouldn’t be able to come up with $400 to pay for a doctor visit without reaching out to friends.

Not only are 26 million Americans too poor to shop, two-thirds of Americans have essentially zero savings.

That gloomy news doesn’t mean you need to bury your head in the investment sand and give up on all retailers. In fact, there are several opportunities connected with cash-strapped American consumers.

For example, the stock of Dollar General (NYSE:DG) has been on fire thanks to strong profit growth. In the last quarter, Dollar General beat the pants off Wall Street’s expectations of $0.94 of profit by delivering $1.03 per share.

That was 22% above last year’s first quarter—and the fifth quarter in a row that Dollar General exceeded forecasts, which tells me there are big profits to be made from catering to cash-strapped Americans.

Oh, and for you dividend lovers, Dollar General pays a $1.00 annual dividend.

That doesn’t mean you should rush out and buy any of these stocks tomorrow morning. As always, timing is everything, but discount retailers are one of the few bright spots in the retail industry and worthy of your consideration.

For more income-producing investment ideas with great upside, try my monthly Yield Shark letter for 90 days. Love it or your money back.