One of my friends set me up on a blind date with a woman he worked with (and who, as an aside, would never be mistaken for Twiggy), and that is exactly what she said within two minutes of meeting me.

Sure, it was a rude thing to say, but she was right—I am heavier than I should be. However, unlike the financial magicians aka chief financial officers that run America’s largest corporations, I can’t snap my fingers and “ex” away the things that don’t make me look good.

I’m talking about the change from the use of Generally Accepted Accounting Principles (GAAP) earnings, to Pro Forma earnings.

Pro Forma earnings are when you adjust for unusual, non-recurring, one-time expenses. Examples:

In my case, my “ex” is the 50 extra pounds I need to lose. In corporate America’s case, it is the creative use of Pro Forma accounting rules to make them appear more prosperous than they really are—because the use of “extraordinary items” and “non-cash charges” has turned corporate earnings reports into a bag of lies.

When I first got into the investment business, the overwhelming majority of companies followed GAAP rules. Now most companies report earnings based on Pro Forma rules. Worse yet, the trend is still growing.

In 2010, 70% of the companies in the S&P 500 were reporting earnings based on Pro Forma results. That percentage has increased to more than 90% today. 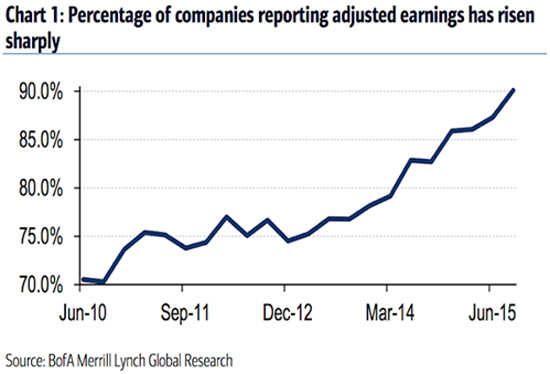 The simple reason is that Pro Forma—or “ex” 50 pounds—calculations make it easier for companies to manipulate their earnings and make profits appear higher than they really are.

As a result, there is a huge difference between how corporations are advertising performance and how they actually did.

If corporate America were forced to use GAAP rules, S&P 500 earnings would have been 12.7% less than reported. The last time the gap between “real” and “massaged” profits was that wide was back during the 2009 Financial Crisis. 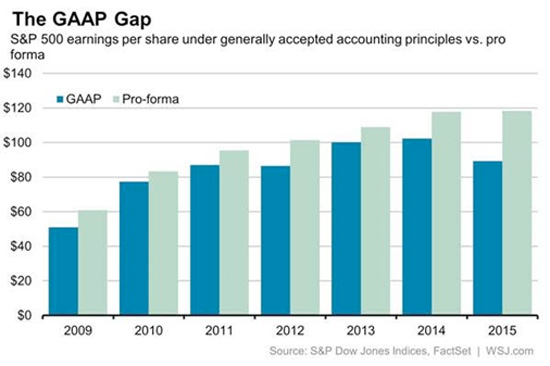 Despite what you hear on CNBC and Bloomberg, stocks are not reasonably priced.

That’s disgraceful, but even with the use of liberal Pro Forma accounting, the profits of the companies in the S&P 500 have declined for the last three quarters in a row.

What should really worry you is that despite the brutal start to 2016, stocks are much more expensive than they seem and very vulnerable to even more pain.

This accounting razzle-dazzle scam wouldn’t work without the cooperation of three parties:

Don’t worry about corporate America and Wall Street; they are making lots of money. The odd man out could very well be you. But heck, two out of three isn’t bad… in their eyes. 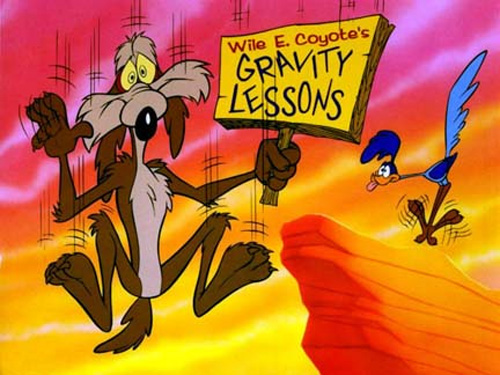 I hope you are using this mini-rally to take some of your stock market chips off the table. I don’t want you to run off a Wall Street cliff like Wile E. Coyote.

That these shenanigans are going on doesn’t mean you’re powerless, though. On the contrary, there’s an utterly gratifying way to stick it to the scamsters—and it involves making bearish bets on big corporations that aren’t doing as well as they claim.

For example, I just identified a great way to make money from the sequel to America’s great housing bubble burst for my Rational Bear subscribers. Subprime liar’s loans are on the rise again, and all the signs point to the distinct possibility that this may not end well.

Click here for my report on the 4 warning signs that the lights may be about to go out in the American housing market—and how you can profit.