How does this sound?

Give me your money. I’ll hold on to it for a few years and skim a little off the top. Then I’ll give you back less than you originally gave me.

No thanks… right? Well, in the bizarro world of central banking, investors all over the world are doing exactly that—because of negative interest rates.

What are the world’s central bankers smoking?

Fixed-Income Hail Mary #1: The European Central Bank went “all in” with negative interest rates and lowered its key overnight deposit rate from minus 0.3% to minus 0.4%. The ECB also expanded its quantitative-easing program by an additional €20 billion per month. 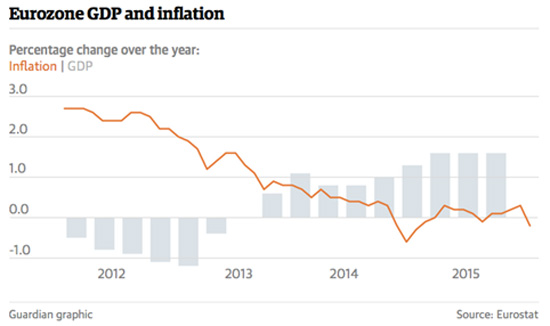 All European banks have to pay the ECB 40 bps for the privilege of depositing money there. I bet the banks love that.

ECB President Mario Draghi made it clear that interest rates would stay “very low” for at least another year. He predicted that deflation is not going away anytime soon and gave himself a giant pat on the back: The eurozone would have faced “disastrous deflation,” he said, if he hadn’t gone even more negative.

Fixed-Income Hail Mary #2: In Japan, the government gets paid to loan money. For the first time ever, the Japanese government sold US$19.4 billion of new 10-year bonds with an interest rate of 0.1% at the average price of ¥101.25, producing a negative yield of minus 0.024%. 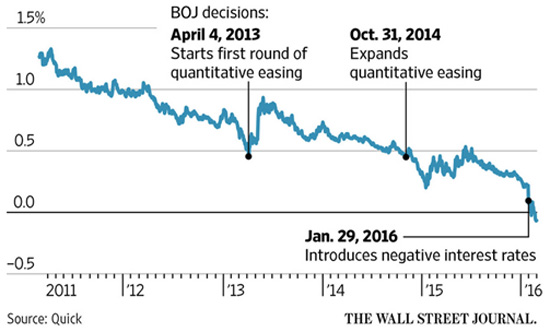 Like the US, Japan runs a massive deficit, but these negative bonds will help because 70% of Japan’s government debt now trades with negative yields.

Japan’s government has been paid US$464 million to borrow money since yields turned negative in October 2014. I guess negative interest rates are one way to reduce your national debt.

Fixed-Income Hail Mary #3: Lots of government debt already has negative yields, but for the first time ever, a corporation was able to sell a new bond issue with negative interest rates. 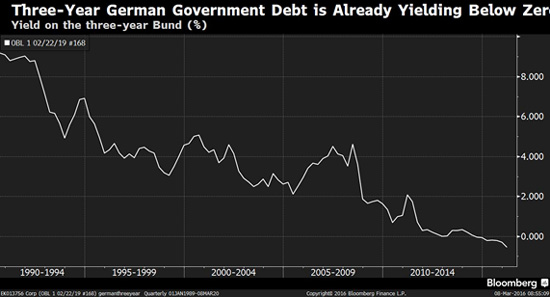 This German bank offering should be a very loud signal to you that whatever paltry interest rates you are enjoying in the US today will very likely turn negative as the Federal Reserve numbskulls are getting ready to join the NIRP (negative interest rate policy) club.

Overall, there is $7 trillion of negative-yielding debt in the world, which equals 29% of the Bloomberg Global Developed Sovereign Bond Index. I’m not talking about backwater, third-world countries either—I’m talking about central banks from developed countries like Switzerland, Sweden, Japan, Denmark, and the European Central Bank.

Don’t think for a minute that negative interest rates can’t happen here. For a short time in 2008 during the Financial Crisis, yields on US Treasury bills actually turned negative. Nervous investors bought Treasuries with such force that prices soared and yields dropped into negative territory.

When things get ugly, the Wall Street crowd has demonstrated that it is willing to lose a small amount of principal in exchange for safety.

Sadly, I think the outlook for conservative, risk-averse retirees who depend on portfolio income to survive is pretty darn bleak if they continue to invest in fixed-income securities like bonds and CDs.

The fixed-income rules have changed, and the only way to generate any substantial portfolio income is going to be with stocks that pay generous dividends. 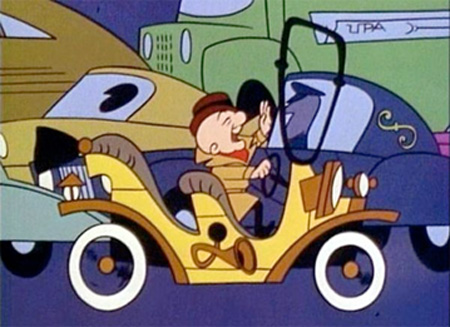 By the way, I think the growth of negative interest rates is one of the reasons that the price of gold has risen.

One of the knocks on gold has always been that it doesn’t pay interest or dividends.

However, 0% doesn’t sound so bad when the alternative is negative interest rates.

Gold, not cash, may be the best storehouse of value in a negative-interest-rate world.

The people running the world’s central banks are as blind as Mr. Magoo and are going to run you over unless you adapt to the new rules of successful income investing.

For yields that will bolster instead of shrink your nest egg, I suggest you try my Yield Shark advisory for income investors (it’s risk-free with 90-day money-back guarantee).

In the current issue, I recommend a successful company whose backlog of orders is a mile long and that, thanks to unrealistic Wall Street expectations, has gone down in price. Oh yes, and it pays a handsome 4% dividend. Click here to get instant access to the issue.