Judging from the large amount of positive feedback on my June 21, 2016 column, An Anatomy of a Successful Short Sale, many of you find it as useful to spot failing companies as to uncover hidden gems.

Instead of looking through the rearview mirror at a stock that has already been beaten down, I want to take a look at a stock that my Rational Bear subscribers are currently shorting, and the reasons why I expect it to fall.

That stock is IBM.

IBM reported its quarterly results last week, and the see-no-evil analysts on Wall Street jumped for joy at what I think were terrible results.

Revenues Magic. What was so terrible? How about this—IBM has reported falling revenues for 17 consecutive quarters. 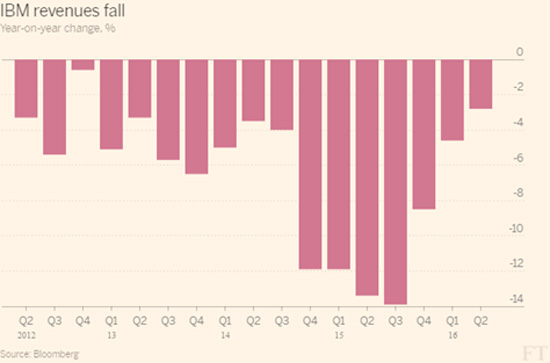 The weakness is widespread:

With all that red ink, the only way you can make yourself look good is by buying other companies. IBM has bought 11 companies worth $5 billion so far this year. In fact, it has spent more on acquisitions in the last 12 months than ever before in the history of the company.

Profit Magic. First of all, IBM reports its earnings on a pro forma basis instead of a GAAP basis. The main reason: it can use accounting magic to prop up its pro forma profits.

On the profit side, IBM reported better-than-expected “pro forma” profits of $2.95, which was above the average forecast of $2.88. On a GAAP basis, those profits shrink to $2.61 a share. 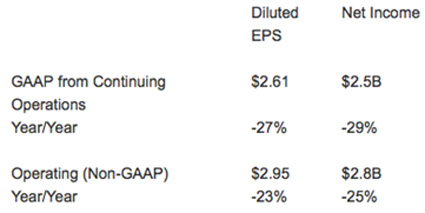 Nonetheless, even using those phony pro forma calculations, the company’s profits are 25% lower than they were a year ago.

Cash Magic. IBM is proud to point out that it increased its cash hoard from $7.6 billion in Q2 of 2015 to $10.6 billion today. However, that cash doesn’t come from operating profits but from borrowing money.

That $10.6 billion cash isn’t going to last long, because IBM is burning through it. In Q2, the company had $3.4 billion of operating cash flow, but spent $5.9 billion on:

That’s $2.5 million of negative operating cash flow. It’s only possible because of IBM’s debt binge and a big warning sign of a company in trouble.

By the way, competitor Infosys warned that Brexit could hurt its business, but IBM is adopting the see-no-evil defense: “Brexit didn’t help, but from everything we’ve seen we haven’t changed our view,” said CFO Martin Schroeter.

My view, on the other hand, is that IBM’s Brexit comeuppance may be near.

Remember, at the top of this column, I said that my Rational Bear subscribers are already betting against IBM, so I am certainly guilty of “talking my book.” But no matter how its accountants spin things, IBM is a disaster in the making.