Get a load of this headline from a German newspaper, which translates into “Extreme Low Interest: Who Saves Is the Fool.”

The reason for that insulting headline is simple: central bankers have been waging a war against savers.

Example #1: Former President of the Federal Reserve Bank of Dallas, Richard Fisher, offered this sage (sarcasm alert) advice last week: “I would be prepared when they move—and I hope they move sometime in June—there’ll be a settling in of the market place. There will be a correction. Suck it up. Deal with it. That’s reality.”

Example #2: ECB President Mario Draghi had this to say: Negative interest rates are “not the problem, but a symptom of an underlying problem” caused by a “global excess of savings.”

“If central banks did not do this, investing would be unattractive,” said Draghi. In other words, shut up and buy some stocks!

What those central bankers want you to do is either (1) spend money to increase demand, or (2) buy stocks to increase capital.

Well, it sure looks like American consumers are not doing the former.

How many times have you heard experts say that the US economy is consumer driven? It’s true; almost 70% of our GDP is attributable to consumer spending. 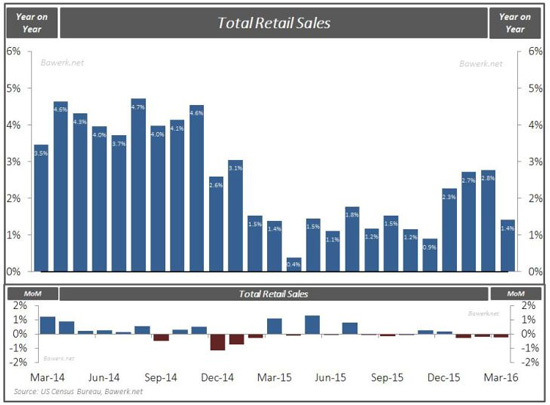 Of course, the people who know how consumers are really doing are the people who sell to them, such as Sally Smith, the CEO of Buffalo Wild Wings, which just reported an awful quarter:

“The macro environment for casual dining has had a rough quarter and a rough couple of quarters. I just don’t think there is a robust consumer out there.”

If Smith and the Census Bureau are right, our economy is headed for a recession. EVERY time the yearly growth rate of retail sales has fallen below 3%, the US economy has gone into recession. 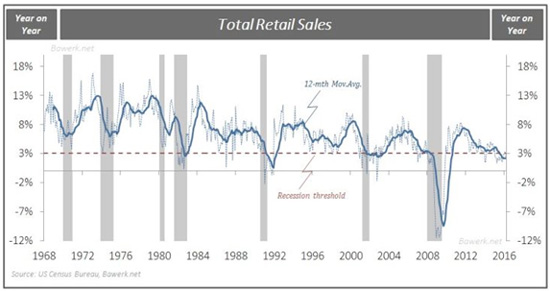 At the same time our consumer-driven economy is hitting a brick wall, there is a regulatory change coming that could knock the stock market off its feet.

I’m talking about the Securities and Exchange Commission finally doing its job and putting a stop to the accounting hanky-panky that artificially inflates profits.

According to Dow Jones, the SEC is getting ready to step up its scrutiny of companies’ “homegrown earnings measures,” signaling it plans to target firms that “inflate their sales results and employ customized metrics that stray too far from accounting rules.”

It looks like the SEC is waking up to the misleading picture that pro forma earnings—compared to generally accepted accounting principles, or GAAP—generate. Now the commission is launching a campaign to crack down on made-to-order earnings.

Mark Kronforst, chief accountant of the SEC's corporation finance division, said, “The point is, now the company has created a measure that no longer reflects its business model. We’re going to take exception to that practice.”

So what will the SEC do? According to the Dow Jones article:

The agency plans to issue comment letters in the coming months that critique firms that booked revenue on an accelerated basis. Mr. Kronforst, who plans to speak Thursday at a Northwestern University legal conference about the issue, declined to name them.

Mr. Kronforst said regulators also plan to challenge companies that report their adjusted earnings on a per-share basis. The results are often higher than per-share GAAP earnings and look too much like measures of cash flow, which decades-old rules prevent from being presented on a per-share basis, Mr. Kronforst said. That is because investors could confuse cash flow with actual earnings, which truly represent the amounts that could be distributed to investors.

“We are going to look harder at the substance of what companies are presenting, rather than what the measures are called,” he said.

In other words, the SEC is finally going to do its job!

To see the impact of such a crackdown, all you have to do is take a look at the growing difference between GAAP profits and pro forma profits. 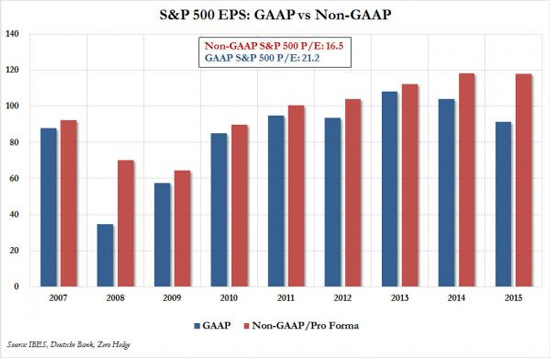 By the way, I suggest you re-read my March 8, 2016 column about corporate America’s accounting razzle-dazzle. 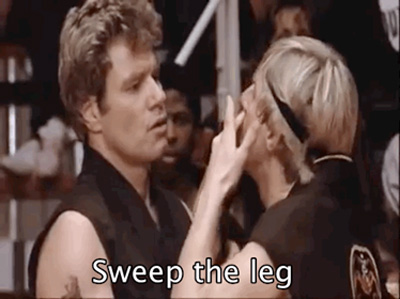 Yes, my bear market radar is on high alert, and the new SEC scrutiny could be just the thing that knocks the bull market off its feet.

When that happens, the subscribers of my Rational Bear premium alert service will be prepared. All through the month, I bring them email updates and buy/sell alerts on the best bearish picks. I suggest you try it for yourself, risk-free.