Politicians and central bankers throw the word “trillion” around as if it were chump change, but a trillion dollars really is a huge mountain of money.

Here’s another way to look at a trillion dollars. If you earned $40,000 a year, it would take:

Clearly, a trillion of anything is a lot—that’s why the headline below caught my attention.

Credit card watchdog CardHub estimates that American credit card balances will hit $1 trillion in 2016, a debt burden that has never been reached before, not even during the go-go days of the dot-com boom.

Not only are Americans borrowing more, they are paying it back at a snail’s pace. Americans added an astounding $71 billion in credit card debt in 2015 and repaid just $26.8 billion during the first quarter of 2016—the smallest first-quarter paydown since 2008.

Disturbingly and surprisingly, the group with the highest credit card debt are middle-aged Americans. The average 45- to 54-year-old American owes $9,000 on credit cards, 50% more than the average Millennial!

But credit cards are just one part of the American debt binge. Total outstanding consumer credit, a measure of non-mortgage debt, increased by $13.4 billion to $3.6 trillion in April.

The biggest chunk is student loans, which make up 37% of outstanding consumer credit. Student-loan lending by the government climbed to $989.6 billion in April and now stands at $1.26 trillion. 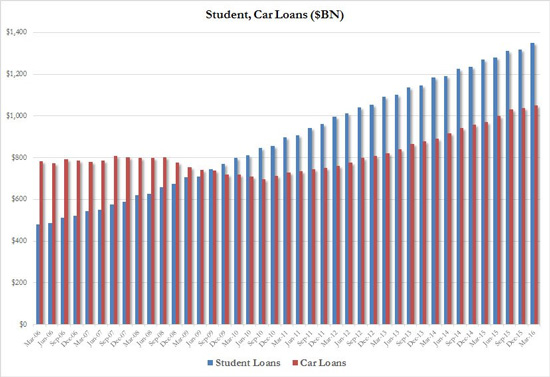 Experian Automotive reports open automotive loan balances rose 11.1% in the first quarter of 2016 and exceeded $1 trillion for the first time ever. Oops! Another trillion dollars!

Because you are reading this column, odds are that you’re not the typical American saddled with student loan, auto, and credit card debt. In fact, you probably are the mirror image with little to no debt and lots of cash.

In fact, there is a lot of profit to be made on the lending side of those trillion dollars of debt. Fact: the average interest rate on credit cards today is a whopping 15.19%.

Given that the national average for 1-year CDs is a measly 1.09%, it is clear that credit card companies are making lots of money.

As a dividend lover, I would point out that Capital One Financial (2.2%) and American Express (1.7%) pay a decent dividend too.

And in case you think that I’m nuts and that the credit card business is a house of cards ready to tumble, you should take a look at PRA Group (PRAA), which is in the business of purchasing and collecting defaulted consumer receivables in North America and Europe.

You see, even in these days of NIRP, ZIRP, and QE… there are still ways to turn lemons into lemonade. That’s what I’m doing in my monthly newsletter, Yield Shark, which focuses on high-yield, dividend-paying stocks. Check it out risk-free for 3 months.