“I certainly see low bond yields, and I see an environment [where] that’s likely to continue into the future.”
—James Bullard, President, St. Louis Federal Reserve 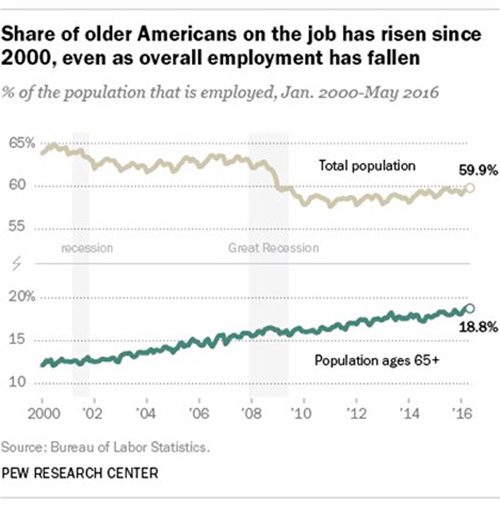 Interestingly (or sadly, depending on your view), the trend for the rest of the American population is almost the mirror image. The employment/population ratio of the adult population has not rebounded from the last two recessions.

Why are so many older Americans working? You could point your finger at several reasons—inadequate savings, the weak economy, and longer life expectancies—but I think one of the biggest reasons is the Federal Reserve’s war on savers.

I’m talking about ZIRP (zero interest rate policy), which has pushed the return on traditional savings vehicles—like bonds and CDs—to almost nothing.

However, even today’s paltry rates may soon disappear as ZIRP is threatening to morph into NIRP (negative interest rate policy). According to Janet Yellen, “We’re taking a look at them. I wouldn’t take those off the table.”

“If the economy were to unexpectedly weaken dramatically, and we decided that we needed to use a full array of monetary policy tools to provide stimulus, it’s something that we would contemplate as a potential action.”
—William Dudley, President, Federal Reserve Bank of New York

“I think negative rates are something the Fed will and probably should consider if the situation arises.”
—Ben Bernanke, former Fed Chairman

Yikes! US interest rates aren’t in negative territory yet… but we’re getting closer as the yield on the 30-year Treasury bond hits a record-low 2.18%.

Let that fact sink in: in the 240-year history of the United States of America, yields are at an all-time low. So older Americans have no choice but to work to make ends meet. 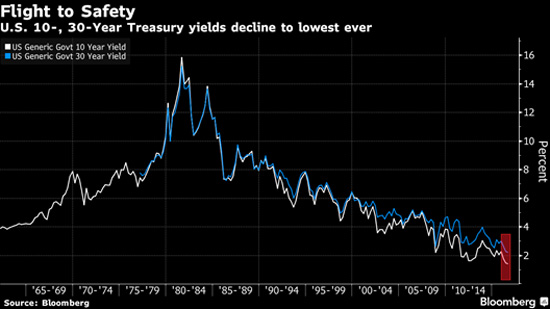 When I first entered the investment business in the 1980s, yields on both 10-year and 30-year US Treasury bonds were above 15%. Yup, you could have locked in a GUARANTEED 15% return for the next 30 years if you would have loaded up on long-term Treasuries back then.

At the time, money market yields were near 20%, so despite my enthusiastic recommendation at the time, most investors refused to buy those juicy long-term bonds.

That objection seems silly today, but that is how many investors (maybe even you) felt in the 1980s.

Income-focused investors face a different but similar challenge today. If you’ve read this column for any length of time, you know I’ve been recommending dividend-paying stocks over traditional fixed-income investments.

You see, the rules for successful income investing have changed, and you need to adjust your portfolio to profit from ZIRP and NIRP by adopting my Yield Shark income strategy that focuses on dividends instead of interest payments.

Until midnight of today, July 5, the special offer from last week is still on. For just the rest of today, Connecting the Dots readers can get one year of Yield Shark for just $99… that’s half off the regular list price of $199.

So don’t wait to sign up. Remember, you have 90 days to figure out if it’s right for you… and make some money in the meantime.

Negative interest rates sounds, well… negative, but NIRP will be a boon to a dividend-based strategy as yield-starved investors from all over the world pile into dividend-paying stocks.