“The United States of America right now has the strongest, most durable economy in the world.”
—President Obama, 2016 State of the Union

Washington, DC is pretty proud of the 5% unemployment rate, but there are millions of Americans who think the job market stinks. Come on! It’s not the number of jobs that matters… it’s what kind of jobs there are and how much they pay. And that’s why I’m calling BS on all the self-congratulations coming out of Washington, DC. Take a look at this: 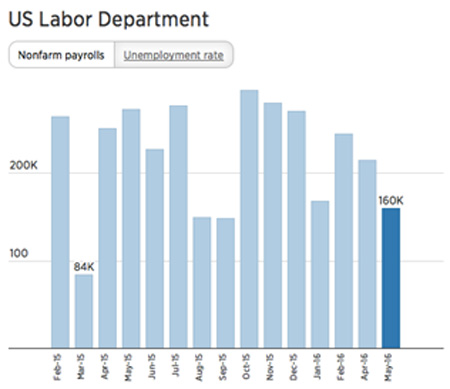 The politicians are proud to point out that our economy created 160,000 new jobs in April… but that’s the fewest in seven months and less than the expected 200,000.

Moreover, most of those 160,000 new jobs were of the “Would you like fries with that, sir” variety.

And certain to raise the ire of Donald Trump supporters, non-US-born workers—both legal and illegal—are enjoying stronger job gains than native-born Americans, according to the Bureau of Labor Statistics. Here are the numbers:

The number of native-born Americans with a job is 125,615,000, and the number of non-native-born US residents (those residing in the United States but who were not US citizens at birth) hit 25,460,000. The BLS doesn’t break out the number of illegal versus legal residents, but I would bet my left arm that the number is significant.

And I think it is very safe to assume that non-US-born workers—legal or illegal—generally don’t have extensive education and command of the English language and therefore have a disproportionate share of low-wage, low-skill jobs. My take is that this is just more proof that the jobs our economy is creating are crummy, low-paying jobs.

And even people that do have jobs are losing them. Outplacement firm Challenger, Gray & Christmas reported that US companies announced plans to lay off 65,141 workers in April, a 35% increase from March and the highest level since 2009!

There are lots of reasons for the sluggish job growth, but I want to suggest that the Affordable Care Act (or Obamacare) is one of the prime culprits because the cost of providing health care is skyrocketing. 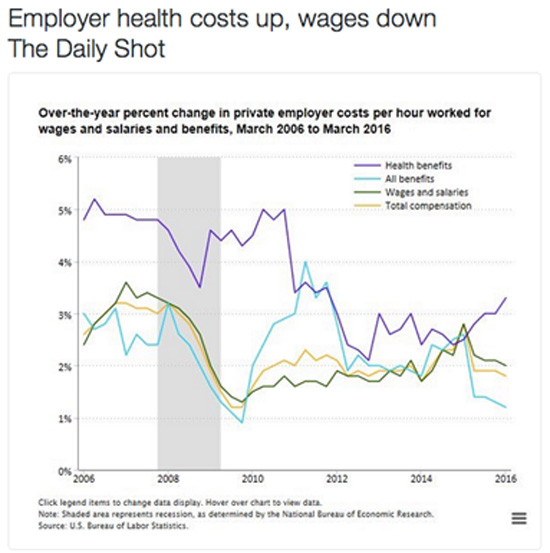 Worse yet, those already-expensive healthcare costs are about to get even more expensive. Oregon and Virginia are the first two states to disclose Obamacare premium proposals for 2017:

Ouch, That Hurts #1: Providence Health Plan, the largest Obamacare insurer in the Oregon Health Insurance Exchange, is seeking an average increase of 29.6%.

Ouch, That Hurts #3: Kaiser Foundation Health Plan of the Northwest asked for an increase of 14.5%.

Ouch, That Hurts #4: Anthem Inc. is asking for an average increase of 15.8% in Virginia.

Ouch, That Hurts #5: CareFirst BlueCross BlueShield of Virginia is seeking a 25% increase.

Ouch, That Hurts #6: Aetna is going to raise premiums by a modest 6% in Virginia.

And don’t forget about UnitedHealth Group, which announced last month that it’s withdrawing from all but a handful of the 34 states where it was offering Obamacare plans because it’s experiencing huge losses.

To be fair, I should note that some parts of the job market are improving. For example, Walmart announced that it is increasing the number of greeters. These greeters will welcome arriving customers and answer questions. 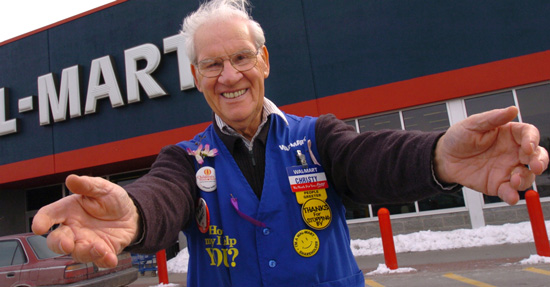 Little noticed by the media, however, was the disclosure that these new Walmart greeters will also be checking the receipts of departing shoppers to cut down on shoplifting.

According to Fortune magazine, Walmart lost an estimated $3 billion to shoplifting in 2015 and has made reducing theft a key priority for 2016.

Yeah… the job market is great. NOT!

Last of all, GoBankingRates, a national website that tracks interest rates, reported that 28% of Americans have ZERO money in their savings account, 13% had less than $1,000, and 21% don’t even have a savings account. 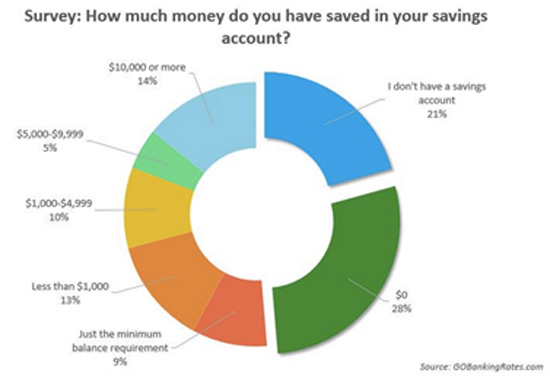 “It’s worrisome that such a large percentage of Americans have so little set aside in a savings account. It suggests that they likely do not have cash reserves to cover an emergency and will have to rely on credit, friends and family, or even their retirement accounts to cover unexpected expenses,” said GoBankingRates.