Memorial Day is a very nostalgic, solemn day for me.

America is a nation of immigrants. Most of us can trace our roots to some place other than the US. For many Americans, this means European ancestry.

I can’t claim any lineage to the Mayflower, nor did any of my ancestors cross the vast Midwest prairie in covered wagons. Like yours, however, my ancestors came to America in search of a better life.

My grandfather, Fusakichi Sagami, was from Hiroshima, Japan. He traveled across the Pacific Ocean in 1893 as a kitchen helper on an American sail-powered freighter. He continued to work in kitchens on any ship that would hire him, including a short stint on the naval schooner USS Augustus.

He married Mitsu, a picture bride, in 1906, started a small vegetable farm in western Washington, and produced 10 children, including my father, Ken.

Fusakichi, Mitsu, and their 10 children were among the 110,000 American citizens of Japanese ancestry held in the World War II internment camps, and despite being unjustly imprisoned and stripped of his land, Fusakichi believed so strongly in America that he ordered all his sons to volunteer for the US Army.

“You may very well die, but you must do this to prove that we are loyal to America,” he told his eight sons from behind the barbed-wire walls of the Minidoka War Relocation Center in Idaho.

Six of the eight Sagami boys volunteered and joined the US Army, and all of them fought in the highly decorated 442nd Infantry Regiment. One of them, my uncle Yohei, died in France and was posthumously awarded a Silver Star and Bronze Star. 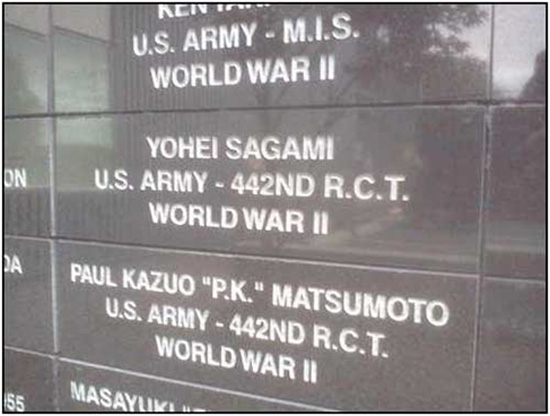 Family friends tell me that my grandmother was never the same after Yohei died. She wore his dog tags around her neck and rubbed the metal completely smooth over the next 50 years of her life. It was almost like she was self-medicating the hole that was in her heart.

“And they who for their country die shall fill an honored grave, for glory lights the soldier’s tomb, and beauty weeps the brave.”
—Joseph Drake

My father ferociously worshiped four things: Jesus, my mother, hard work, and the United States of America. He was as fiercely patriotic as my grandfather, and I believe the biggest disappointment I ever caused him was my failure to serve our country.

I turned 18 during the tail end of the Vietnam War, and my father pushed me to go the ROTC route for college. I reluctantly signed up for Navy ROTC and received an appointment, but I dropped out eight days before the start of my freshman year, succumbing to the pleading tears of a now long-gone high school girlfriend.

My quitting ROTC disappointed my father so badly that he didn’t talk to me until Christmas of that year. Of course he loved me, but I’m not sure he ever fully forgave me.

So what’s this got to do with investing?

My father died in 2009 at 93 years old, but I know he would be disgusted at the government snooping on our phone calls and emails, the IRS’s abuse of power, and other intrusions on the freedom that the Sagami boys fought for in World War II.

Strong feelings mean opportunity for companies that help people who don’t want the government sticking its nose into our lives; especially our electronic lives.

Here are five companies whose business is to protect private information from prying eyes:

Currently all five provide Internet security solutions to corporations instead of individuals, but they are experiencing very rapid growth.

Of course, timing is everything, so you should wait for my buy signal before you jump into any stock, but personal privacy and online security are going to be one of the biggest, most profitable businesses going forward, and you should look for ways to get them in your portfolio.

Memorial Day: Not Just Another Day Off

Memorial Day, originally known as “Decoration Day,” was created in 1868 in order to commemorate the Union and Confederate soldiers that died during the Civil War.

Today, it honors all the American servicemen and servicewomen who sacrificed their lives for our country, but the true meaning of Memorial Day has gradually been overlooked by many.

For many, Memorial Day has become an extra day off from work that includes barbecue, hamburgers, and baseball instead of a solemn day to reflect and remember the brave men and women who gave their lives for America’s values and freedom.

“Freedom is never more than one generation away from extinction. We didn’t pass it on to our children in the bloodstream. The only way they can inherit the freedom we have known is if we fight for it, protect it, defend it, and then hand it to them with the well-thought lessons of how they in their lifetime must do the same.”
—Ronald Reagan

Freedoms, including the right to privacy, are what my Uncle Yohei and thousands of other American soldiers fought for, and I hope that all of us can take a minute out of our holiday to remember those fallen veterans.