Where do you find $500 billion that you can take from the above items to balance the budget?

Americans want two incompatible things: They want their taxes reduced, and they want more benefits. Or at least, they don’t want their benefits (or those of their parents or friends) cut.

And of course, they want more GDP growth—which is inconsistent with the growing debt.

Who actually pays the income taxes the federal government collects? Look at this chart. 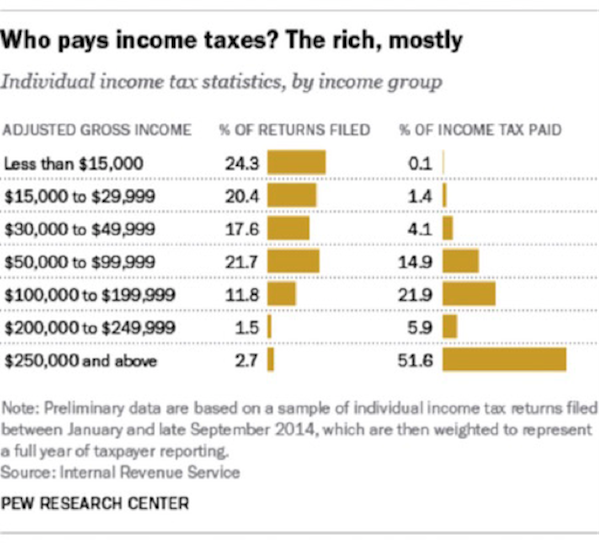 In the Best-Case, Unrealistic Scenario, We Are Still $800 Billion Short

I will give Ways and Means Committee Chairman Brady kudos for trying to do that with his border adjustment tax. Let’s look past the fact that I think a BAT will cause a global recession: Brady’s motive is good.

He certainly recognizes that in order to cut income taxes he’s going to have to go to a consumption tax of some form. Seriously, that is an extraordinarily brave position for a Republican in the House leadership to take.

That Ryan has signed on to it says that he too realizes they have to do something radical.

Yes, repealing Obamacare and really restructuring health care might save a few hundred billion here and there. Maybe. Over time. (In October, I wrote "How to Rebuild Healthcare Right.")

Great, now we’re down to needing only another $800 billion to balance the budget. And we haven’t cut personal taxes or done anything with corporate taxes. Or come up with measures to create jobs.

I would like to think that the American voter would someday wake up and become less dysfunctional. I would also like the Jobs Fairy to create another 5 million high-paying middle-class jobs.

I think both events fall in about the same range of probability… as in, not going to happen.

Clowns to the left of me, jokers to the right, and here I am, stuck in the middle with the American electorate.

Conclusion? Unless we want to blow out the debt—and we could do that—we are going to have to raise revenues.