Brexit has a myriad of impacts on the global economy (read Mauldin Economics’ special report on Brexit implications). One of them was a huge hit to the UK’s financial sector. Almost every major financial institution in “The City” took it; a few saw their valuations slide by as much as 15–25%.

Real estate firms and homebuilders were no exception. They lost 20% to 30% of their value in just two trading days.

On a related note, major London real estate agent Foxton’s issued a profit warning the day after the Brexit announcement. The company highlighted that revenues and adjusted earnings were going to be “significantly lower” than last year.

The UK real estate market is set for tough times

Single family home prices in the UK rebounded after the 2008 Financial crisis. Even though the prices continue to increase in the first half of 2016, many analysts believe that the UK real estate market is heading for an extended down cycle. 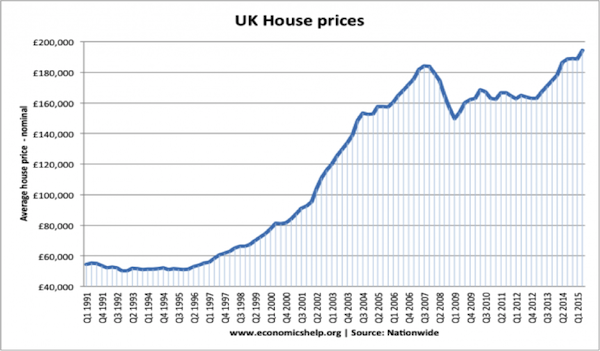 High-end property sales in London had already weakened even before the vote, due to notably higher real estate transaction taxes that kicked in 2015.

Savills UK head of research Lucian Cook explains why he expects a slump: "The prospect of an increase in mortgage interest rates and a reduction in wage growth is expected to create greater affordability pressures over the medium term, particularly in London where borrowers have stretched themselves further." Cook went on to add that an increase in interest rates is another risk factor.

Leonard Steinberg, the president of major US real estate brokerage Compass, projects a 5% annual decrease in UK real estate sales for at least the next two years. He expects London to see the largest losses.

“London has, for the longest time now, been the global center of the economy, and I do believe that this is a stumbling block for them,” Steinberg commented in a recent interview.

“Anything in the United States will fare very well with the European-centric audience,” he continued. “New York, Boston, Chicago, Miami, Los Angeles—I think major centers will always do very well with a foreign buyer.”

Buyers will Shift to NYC, LA, Miami, and San Francisco

Foreign buyers bought around 75% of all newly built central London homes in 2013. Almost 45% of the buyers were from Singapore, Hong Kong, and China, with a significant number also from Russia and the Middle East

A cheaper pound may mitigate some of the selling pressure. Luxury real estate analysts, however, highlight that the very wealthy try to avoid uncertainty as much as possible. They prefer real estate investments with stable, long-term growth.

Brexit certainly clouds the future of London as the financial capital of Europe.

The Brexit boon to US real estate is also not just limited to the luxury market. The political uncertainty surrounding the entire snafu has led to a global flight to safety. That has put downward pressure on US bond and mortgage rates.

Average US mortgage rates have dropped to 3.5%, which makes homes more affordable and brings in even more buyers.

Free Special Report: How Brexit Will Affect the UK, Europe, and the US

Britain’s vote to leave the EU sent shockwaves throughout the world, plunging markets into chaos and Europe into an existential quagmire.

Get this free special report from Geopolitical Futures founder and acclaimed intelligence expert George Friedman to uncover the truth about Brexit—and the devastating fallout we can expect to see worldwide.