Many people agree that the first objective for tax reform must be to create jobs. The entire transition team’s number one objective is creating jobs. Good jobs, American jobs.

That was the heart and soul of Trump’s campaign. While there are serious disagreements on the path, everybody agrees on the objective.

I am not so sure that everyone understands the nature of the terrain we must cross in our quest to create jobs, let alone the changing characteristics of the objective.

It’s Technology, Not China or Mexico, That’s Taking Our Jobs

Tax reform, at least the Republican version, is predicated on creating jobs in the United States. In his campaign and since, Trump has focused on how Americans are losing jobs to foreign competitors.

The truth is a little more complex. The simple fact of the matter is that United States is producing more manufactured goods than ever before. And the growth trend in manufacturing, which was established in the 1920s, has shown no signs of slackening—even through recessions.

The chart below is studyfrom a study done by two professors at Ball State University. It’s a fabulous analysis that shows that 80% of the jobs that have been lost in American manufacturing have been lost due to technology. 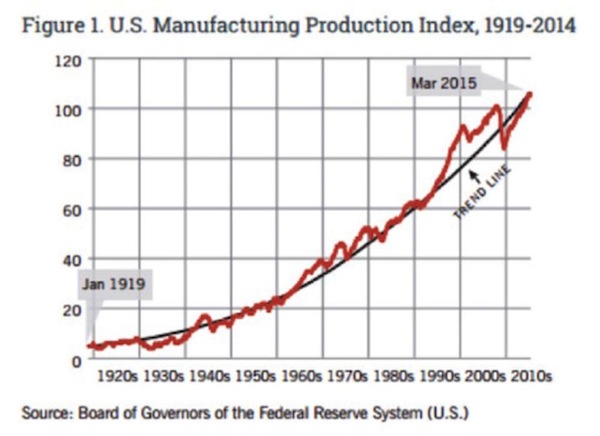 That trend is not going to change. Technology is going to continue to increase the productivity of American (and global!) manufacturing. With companies like Foxconn in China creating robotic production lines, the cost of labor is truly becoming a rounding error in manufacturing.

We can all argue over the efficacy of supply-side economics, but the reality is that Reaganomics created a marvelous boom of both productivity and employment. Bill Clinton had the advantage of that wind in his sails, and when coupled with Newt Gingrich’s reforms, it allowed him to balance the federal budget.

You Should Be More Worried Aabout Service Jobs

The current tax proposal would make Reagan proud. And the expectations of everyone I am talking to are that the planned tax reforms will have the same effects that reforms did in the 19’80s and 19’90s. Problem is, now it’s 2017.

I am worried that the future won’t see us losing manufacturing jobs so much as service jobs.

If you are in the market for a diamond, do you go to the mall to look in jewelry stores? Not if you’re a smart shopper. You might go to the mall to see what you like, but you buy at Blue Nile, which is a kind of eBay for diamonds and other jewelry.

In the coming weeks, we are going to see that the proposed tax reform is going to turn the finance world on its head. That world—what we think of as traditional banking and investment—puts only about 15% of its investment money into new-business development. The rest goes to financialization and the buying and selling of existing companies (share buybacks, etc.).

In the proposed tax reform, 100% of investments will be allowed to be written off in the first year. Build a factory? Forget amortization; write it all off this year. Everything but the land will be a 100% write-off.

The current tax proposal works well for traditional businesses. And it will certainly kindle whatever animal spirits are out there in nascent form.

Upon reflection, I am not sure that you could create more retail and service jobs with any other tax reform than what is proposed, but that reform may not be enough. As more and more retail jobs succumb to online sales, robots, artificial intelligence, and other technologies, it may be increasingly difficult to counter the losses with new job gains.

Not this year or next year but sometime in the future, we are going to have to consider what we as a society are going to do in a post-employment world.