In response to the 2008 financial crisis, the Fed and other central banks deployed zero or near-zero interest rates, quantitative easing, and assorted other interventions.

These may have averted an even worse disaster, but their impacts were far from ideal. Nonetheless, the economy slowly lifted off as consumers rebuilt their balance sheets and asset values rose.

The asset values climbed in large part because the Fed practically forced everyone with money to invest it in risk assets: stocks, real estate, corporate bonds, etc.  But as my long-time Thoughts from the Frontline readers know, the Fed’s trickle-down monetary policy hasn’t really worked.

The resulting wealth effect theoretically enabled more spending, at least by those in the top income quintile. But the recovery has been slow and ugly, and too many people still don't feel the progress.

QE Benefits Were Not Evenly Distributed

Those who gripe about income inequality actually have points to make.

Even if you filter out the top one half of 1% (the tech billionaires, Warren Buffett, et al.), there is still a large imbalance in how much the top and bottom earners have benefited from the Fed’s lopsided monetary policy.

The chart below shows that the share of unmarried adults in double-up households has increased in all age brackets, and especially among Millennials. 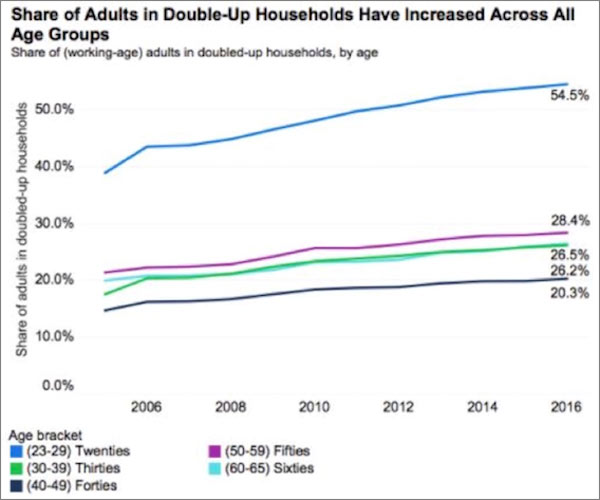 Having a few Millennials in my own family, and even some young Gen Xers, the need to double up is readily apparent to me. Rents are just too high for the average person. Also notice that nearly one in three people between ages 50 and 59 is living with someone else in order to save on rent and other expenses.

Furthermore, as I wrote in Thoughts from the Frontline last year, nearly 5 million Americans are in default on student loans. Is it any wonder people are doubling up on their housing?

The economy and markets are growing, but the benefits of that growth are not evenly distributed. Supposedly a rising tide raises all boats, but it’s not working that way today.

Quantitative Tightening at the Worst Time

Both measures have a tightening effect on an economy that isn’t growing remotely as well as it has in past recoveries. So why is the Fed doing it?

Because the FOMC members fear inflation will take hold if they do nothing. They are probably wrong there, but my opinion isn’t factored into their models.

In other words, my #1 risk factor for the US economy in 2018 is Federal Reserve overreach. There is a significant chance that their anticipated inflation will not appear and the Fed will tighten too much too soon.

The same risk applies to Europe as the ECB significantly reduces its quantitative easing.

Look at the graph below, which shows the amount of quantitative easing that was pumped into the economy in the last few years. With 2½ trillion dollars of monetary stimulus from the world’s central banks, we still need tax cuts and boosted infrastructure spending to expand the US and global economy? Seriously?

Further, their quantitative tightening, which is what it really is, is going to reduce M2 money growth from its current 4% to less than 2%, as Lacy Hunt pointed out to me a few days ago.

That slowdown is likely to affect the velocity of money, exerting further deflationary pressure on the economy. It is monetary policy madness to raise rates and undertake quantitative tightening at the same time.

Do I think the economy can actually stand three rate hikes next year? Without risking a recession? I think it’s likely that it can.

But nobody has any data based on real experience, which can predict what will occur if there is effective quantitative tightening at the same time. This is a real-time experiment.

We don’t know—and by we I mean you and I and all of our central bankers. I don’t much care what their models say, because their models have been continually, disastrously wrong.

They create those models in order to give themselves excuses to do what they want to do, and then they conduct massive monetary experiments on economies to sees what happens. Sometimes everything works out. Sometimes it doesn’t.

Here is the US Treasuries yield curve as of December 5, from a graph on Seeking Alpha by Richard Turnill. The curve is slightly flatter today than it was then. 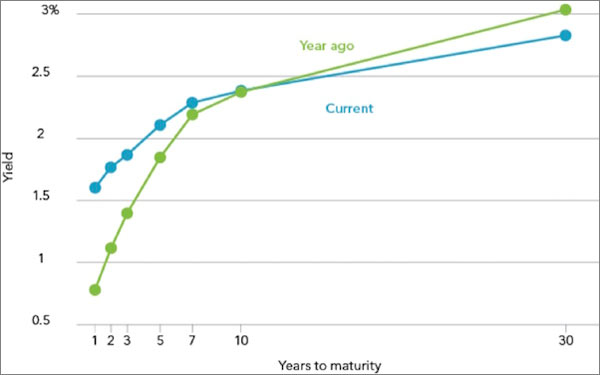 As I’m sure you know, an inverted yield curve happens when short-term rates are higher than long-term rates. I have used the yield curve to accurately predict the last two recessions.

But let’s add a note here: A flattening yield curve does not mean there is a recession in our future. The yield curve has to be inverted for a period of time, and since World War II, when we have had an inverted yield curve for a protracted period, we have typically waded into a recession a year later.

So even when we get an inverted yield curve, it doesn’t necessarily mean that we should immediately head for the storm shelter. In the last two cases of inversion, stocks continued rising (by over 20% in 2006!) before the general market rolled over and a recession ensued.

I recall an offstage debate David Rosenberg, David Zervos, and I had in Florida two or three years ago. They were arguing that the economy would not weaken until we had an inverted yield curve.

And my question was, quite simply, “How can we have an inverted yield curve, since the Fed is going to hold rates down almost forever because of the risk of their rising and thereby making the economy worse?”

And they assured me that the Fed would eventually get around to raising rates, probably by too much, and that we would then get an inverted yield curve and could start thinking about storm shelters.