The question people ask me most often is when the US will see inflation.

Not to be a two-handed economist ("on the one/other hand"), but it's really the third hand—the gripping hand, which has the least dexterity and the most strength—that holds the answer.

The thing is, you cannot predict inflation or deflation until you know what happens with COVID-19 this summer.

The good news is that US vaccinations are accelerating. States and the federal government are working out bugs in the process. Supply constraints are easing a bit. It is still going much too slowly, but was always going to be an ordeal. The single-dose Johnson & Johnson vaccine should be approved soon and will help give everyone a chance to be vaccinated by this summer.

And hospitalizations are way down… 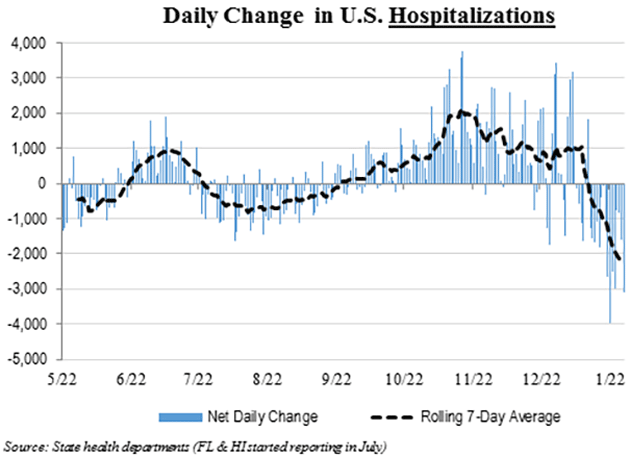 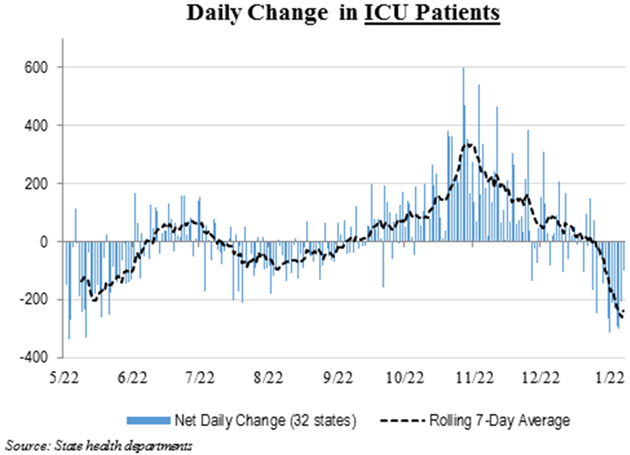 The testing positivity rate and number of new cases are dropping, too. Well over 27 million people in the US have had at least one vaccine dose, with about 1.3 million more doses administered each day. 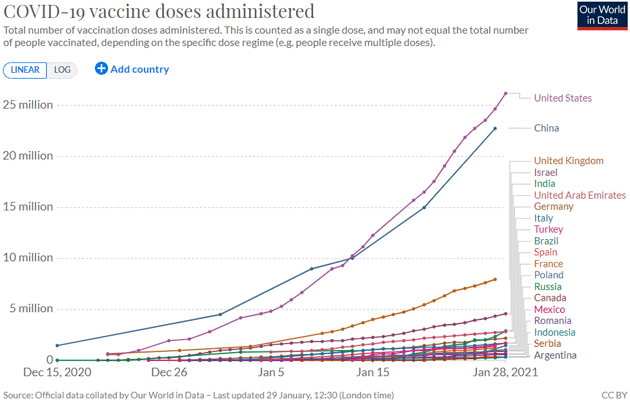 Here is another chart comparing the responses of various countries. We must remember that we have to vaccinate the world to keep a new strain/variant from popping out and starting this process all over again. 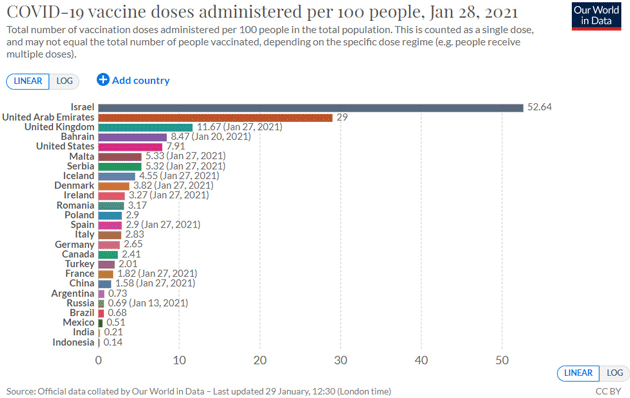 The winter surge is reversing. So we'll soon see if current measures are enough to keep it that way.

On the other hand, the numbers are still worse than they were at last summer’s peak. Then there's the British B117 strain and other more infectious variants, which could send case numbers and hospitalizations higher again—possibly a lot higher.

Back with a Vengeance

Let's imagine the US and other major economies vaccinate enough people in the next few months to let semi-normal life resume. Restaurants, hotels, airlines, and other hard-hit industries start to get back on their feet.

Pent-up demand will make people spend some of the extra savings they've accumulated (often via fiscal aid programs) in the last year.

Possible? Yes, but I don’t expect it.

I think this experience is scarring many people in the same way the Great Depression scarred our parents. Their generation adopted a permanently thrifty attitude. We’ll see if—or for how long—that sticks for this generation.

But inflation can come from other directions, too. My friend Louis Gave sees it coming back with a vengeance. That's thanks to central banks "printing money like never before" and supply chains—specifically, between the US and China—coming under scrutiny.

But what really matters is how the Federal Reserve responds if price inflation pushes interest rates higher.

Louis believes the Fed will enact some kind of “yield curve control” to keep long-term Treasury yields near 2%. This will tank the dollar, boost inflation and send “real” interest rates even more negative than they are now, to finance fast-growing government debt.

This scenario would be good for gold and terrible for bonds. So, plan accordingly.