Since its formation in 2014, the Russia-backed Luhansk People’s Republic in eastern Ukraine has been plagued by infighting, occasional violence, and even allegations of an attempted coup. Not much is likely to change in the immediate future.

Luhansk is a highly urbanized region that spans roughly 10,000 square miles (26,000 square kilometers). It borders two other Ukrainian regions, Kharkiv and Donetsk, but the border it shares with Russia is longer than the one it shares with the rest of Ukraine. It once had a population of more than 2 million, but this number has been declining for years as people fled the fighting for cities like Kiev or Moscow. As of December 2017, the population of the LPR was 1.4 million, with 435,000 of those living in the city of Luhansk.

The population of the LPR can be divided into four categories: Russian speakers (the largest category), Ukrainian speakers, speakers of both languages, and Russian speakers who call themselves ethnic Russians. According to the 2001 census—the most recent census in Ukraine—52% of the population in the LPR is Ukrainian and 44% is ethnic Russian. But 77% of people said their native language was Russian, and there are areas within the LPR where the Russian population is dominant. 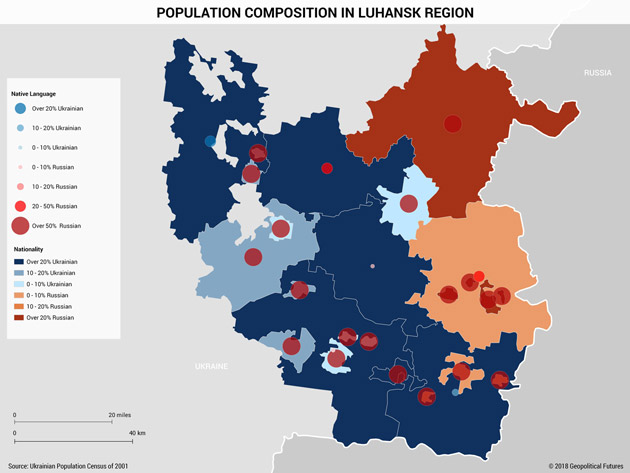 When the new, pro-Western government in Kiev took office in February 2014, it had the support of the population in the capital and in the northern and western parts of the country, but it failed to sway people in the southern and eastern parts, where the ousted president, Viktor Yanukovych, enjoyed greater support. By late April 2014, a confrontation was brewing between Russian-backed separatist rebels and Ukrainian security forces. Occasional clashes soon turned into a full-fledged armed conflict. Kiev’s drift into the Western sphere of influence concerned Moscow, which sees Ukraine as a critical buffer between itself and Europe. But Russia also viewed the unrest in eastern Ukraine as an opportunity to increase its influence over the region by supporting the separatists and even annexing Crimea.

The part of the Luhansk region where the LPR is located is known for its vast deposits of high-quality coal. At the beginning of the 20th century, the first attempt was made to separate this region from other industrial regions. In 1918, the Donetsk-Krivoy Rog Soviet Republic—which included present-day Kharkiv, Donetsk, and Luhansk—was established as an autonomous republic, uniting the coal-producing regions. Despite the territory’s autonomous status, however, the Soviet Union maintained control over it, since the Soviets wanted to create an industrial zone that would service and depend on Moscow. The importance of this history is that this region, unlike other autonomous regions in the Soviet Union, was united not by a common sense of identity or nationality, but by its economic utility.

Industry and coal mining proved to be a double-edged sword for Luhansk. For a long time, they served as the source of the region’s economic development, but they also strengthened its dependence on Russia. The economy of the region was built to be a component of the Soviet economy, so after the collapse of the Soviet Union, factories in Luhansk had no choice but to continue to work closely with Russian businesses.

This explains, at least in part, why Luhansk and its neighbors were reluctant to support a pro-Western government that could put their relationship with Russia at risk. The coal, metals, and machine-building industries that had survived were less competitive than those in the rest of Europe. Given that Russia is Luhansk’s biggest market, there is concern in the manufacturing sector that if this territory does not maintain a pro-Russian outlook, thousands of jobs could be lost.

When the fighting started, Luhansk was ripe for a separatist movement. Its people were dissatisfied with the government in Kiev, particularly the way it distributed the country’s resources. Many believed (erroneously) that the region’s wealth and resources were being unfairly redistributed to the impoverished and less productive parts of the country, which contributed to a growing sense of alienation from the rest of Ukraine. Moreover, the Euromaidan revolution bolstered right-wing Ukrainian nationalists who, among other things, tried to repeal the law that allowed regions to give special status to minority languages. The separatists argued that Kiev was trying to diminish the importance of the Russian language in Russian-speaking regions. Finally, Luhansk believed there were negative consequences to joining the European Union—specifically, reduced trade with Russia and the possibility that Ukraine could be forced to adopt austerity measures similar to those imposed on countries like Greece that have struggled with high debt and other economic problems.

Although there was much pulling Luhansk away from Kiev, now that it’s free, it has nowhere to go. Russia doesn’t want to absorb the region and have to dedicate more scarce funds to it. Ukraine won’t accept Luhansk’s return unless the republic forfeits its autonomous status. And although the Donestk People’s Republic would welcome integration with Luhansk, for the LPR it would mean admitting defeat in the struggle for leadership over Donbass. As long as the parties involved are unwilling to make concessions, the LPR seems destined to remain in this frozen conflict.