There are 2,208 billionaires on earth, according to Forbes.

But only 3 are rich enough to qualify as “centi-billionaires”—worth $100 billion or more.

#3 will probably surprise you.

It’s not a hedge fund manager... a banker...or a Russian oligarch.

This past week, Bernard Arnault’s personal fortune grew to $100.4 billion.

Gates and Bezos made their fortunes “the regular way”—by developing game-changing products that hundreds of millions of people use every day. Eight in every 10 computers run on Microsoft’s software. Over 100 million Americans subscribe to Amazon’s Prime delivery service.

A prestigious brand is a powerful thing. A no-name handbag from Target might cost $100 tops. But women line up around the block to hand over $5,000 for a Louis Vuitton.

LVMH’s business is booming. Profits have surged 89% in the past three years, and its stock has shot up 180% since 2016 vaulting Arnault into the centi-billionaire club. 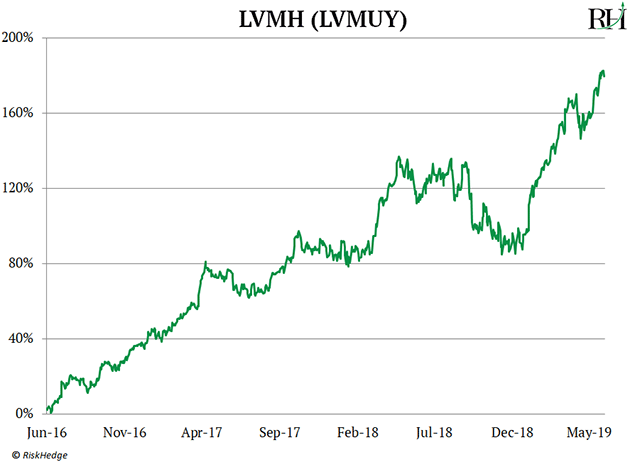 Like Louis Vuitton, Gucci is a super luxury brand. If you want a pair of Gucci sneakers, prepare to drop a thousand bucks at least.

It might sound ludacris to spend the equivalent of a small mortgage payment on shoes, but Gucci’s are flying off the shelves. Sales at its parent company, Kering (PPRUY), jumped 50% in 2018.

Kering’s stock is on fire. It’s surged 285% in the past three years, as you can see on this chart. That’s double the gains of Amazon and Microsoft over the same period. 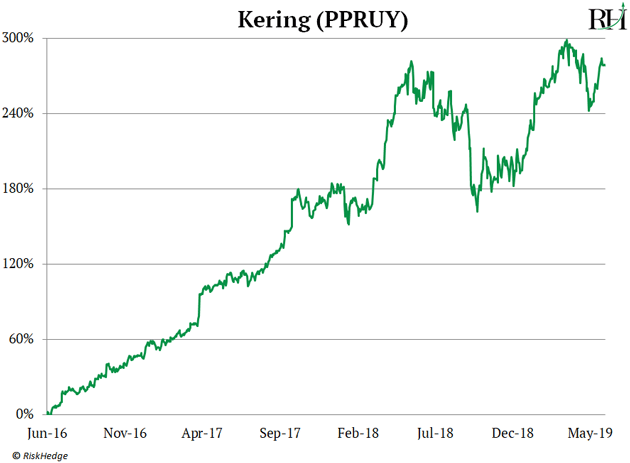 By now you know all about how online disruptors like Amazon are putting regular stores out of business.

According to leading retail research firm Nielsen, more than 21,000 stores have shut their doors in the past five years.

Instead, it’s the middle-of-the-road retailers that are getting crushed.

Toys “R” Us… Sears… Bon-Ton… Borders… Circuit City… and RadioShack are all bankrupt.

Meanwhile, many other middling retailers are barely clinging to life. Macy’s (M), J.C. Penney (JCP), Dillard’s (DDS), and Nordstrom (JWN) still have a pulse, but they’re fading fast, as you can see here: 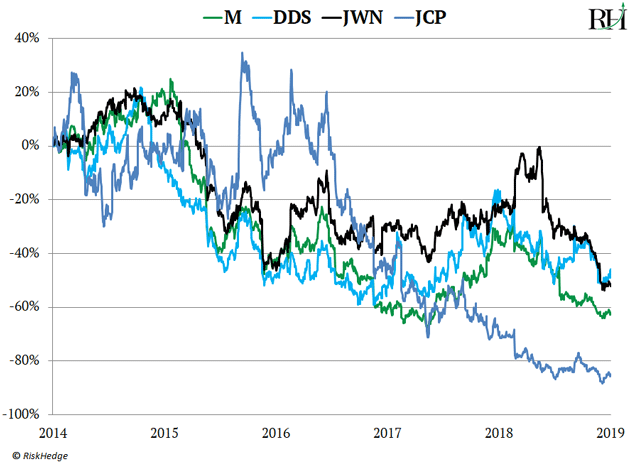 The “department store” business model used to work okay. Open a big store... sell everything from blouses to outdoor grills to video games. As long as the store was located in a place with enough people coming through—like a city or a shopping mall—it could do good business.

Those days are long gone. Internet shopping has blown up unspecialized, “middle of the road” stores.

According to Deloitte, discount store sales have surged 40% in the past five years.

Dollar General (DG), for example, is America’s largest dollar chain. You could have doubled your money on its stock in the past two years: 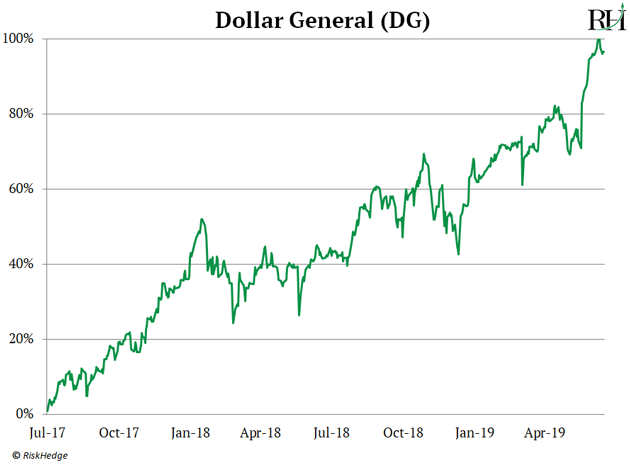 Dollar General is now the largest US retail chain by store count. It operates almost 16,000 stores—more than McDonalds… Starbucks… or Walmart.

Revenue has shot up 145% in the past decade. And it’s not just low-income folks shopping there. According to JP Morgan, households earning between $50,000 and $75,000/year are Dollar General’s fastest-growing customers.

Where will it strike next?

So what should a disruption investor do with this information?

For better or worse, the middle is dying as its lunch is eaten from above and below.

What mediocre company will be disrupted next? Tell me your thoughts at stephen@riskhedge.com.