You know me as the disruption guy. It’s my job to study disruptive trends and show you how we can make money from them.

And coronavirus is one of the most disruptive forces we've ever seen...

Last week, I showed you how this pandemic just triggered a disruptive megatrend in the $1.5 trillion/year US grocery market…

Now the virus is sparking a far more sinister disruption.

It’s laying the groundwork for a massive cyberattack.

In fact, I’m on record today saying we’ll see the largest cyberattack in HISTORY within the next six months.

Nobody is talking about this today. Fighting hackers is the last thing on most folks’ minds…

But coronavirus practically guarantees “largest cyberattack ever” will soon be plastered all over the frontpages.

I’ll explain why in a second. And I’ll show you the proven pattern for making big money off cyberattacks.

Talk to any cyber expert and they’ll tell you a big chunk of time and money is spent on reducing their “attack surface.”

Imagine playing a game where you have to break into two buildings.

The first is a Beverly Hills mansion. You can try to get in the front door. If that doesn’t work, you can enter through the poolside bar… any one of twenty windows… or sneak in through the basement.

The second building is an underground concrete bunker. No windows. Only one door.

It would be a lot tougher to break into the concrete bunker, right? There is only one way in. Which means the “owners” can focus all their efforts on securing that one point.

This is also how it works in cyber-land. The more devices connected to a network, the larger its attack surface grows… making it easier for hackers to infiltrate the network.

In short, each new device is a gateway where hackers can find vulnerabilities in and use it to wreak havoc on your system.

Before the pandemic hit, employees who worked remotely were usually given special work laptops with beefed up security.

For example, my friend works for the Irish tax authorities—the equivalent of the IRS. He often works from home, but under strict guidelines. He must use a dedicated work laptop and a separate, secure wi-fi connection.

He has to jump through multiple security hoops to even get past the welcome screen. For example, he must plug in a USB security stick to “unlock” work files. These measures make him difficult—but not impossible—to hack.

In short, this is the level of security needed to ward off hackers.

The thing is… coronavirus has uprooted all our lives in many ways. And among the most visible disruptions is forcing hundreds of millions of Americans to work from home.

Practically every employee in every firm in America is working from a makeshift desk on their kitchen table.

Firms only had days to cobble together remote work plans. So you can bet most didn’t set up secure systems, like the one my friend is using. In fact, the vast majority of employees probably don’t even have dedicated work laptops.

This is a dream come true for cyber criminals.

Hackers only need to gain access through one entry point to seize control of a whole network. Once they’re in… they can steal data… secrets… and even lock you out of the network.

Hackers broke into the networks of America’s largest defense contractor, Lockheed Martin, by targeting remote workers. If they can infiltrate this system, you best believe remote workers with little security are easy pickings.

In the past month, hackers have targeted the US Department of Health. And attacks against the World Health Organization have more than doubled.

These are only the hacks we know about. Cyber intelligence firm CYFIRMA revealed cyberthreats related to coronavirus shot up 600% from February to March.

It’s only a matter of time before we hear about a major cyber breach.

Look, I hope I’m dead wrong predicting that we’re about to see the biggest cyberattack in history. None of us want to see a big company or government taken down. Especially not when the world is fighting a deadly pandemic.

But remote workers are fertile ground for cyber criminals. The attack surface has never been wider, so a major cyberattack is baked in the cake.

Fortunately, there is a proven pattern for making money from cyberattacks…

Do you remember when news broke about the Facebook and Cambridge Analytica scandal in early 2018? It sparked a huge run-up in cyber stocks. The largest cybersecurity ETF (CIBR) jumped 25% over the next six months: 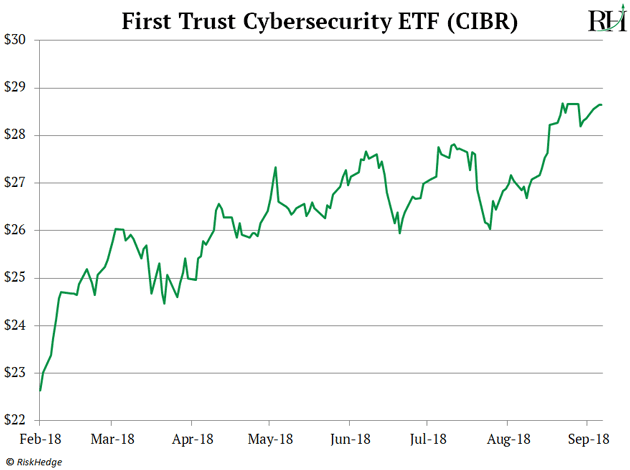 Many cyber stocks jumped 30%+ over the next four months: 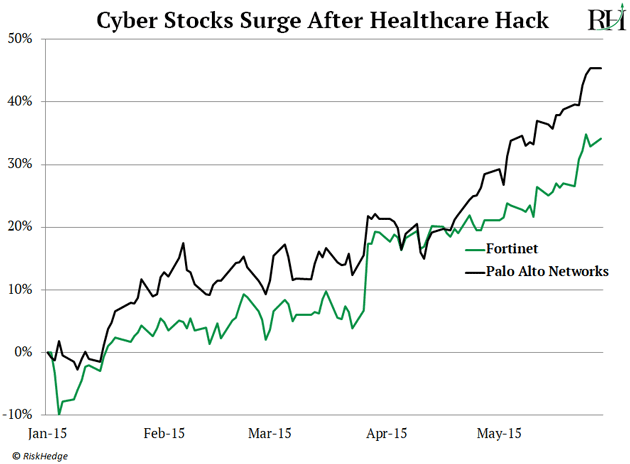 And we saw this same pattern again less than two months ago.

In January, the US military launched a missile attack that killed an Iranian general. Iran is a cyber superpower, and they vowed revenge by striking America’s digital networks.

Some cyber stocks jumped as much as 30% in just six weeks! 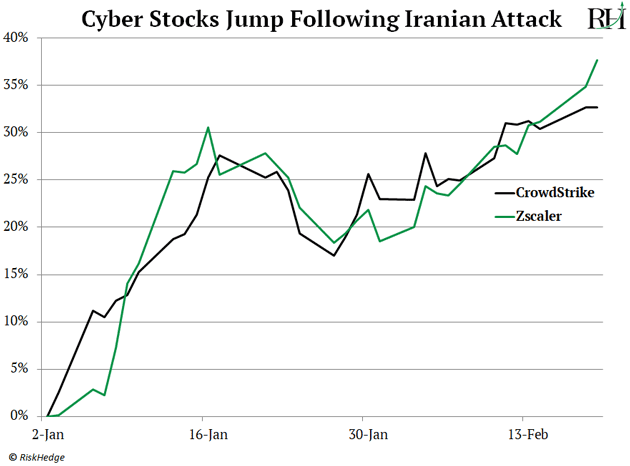 In short, investors frantically buy cyber stocks after the major cyberattacks hit the headlines. But you want to be invested before the rest of the world piles in.

With the groundwork for the largest cyberattack in history being laid out as I type, I expect this pattern to repeat soon.