Cryptocurrencies have surely been the best-performing asset class of 2017.

The crown jewel of the crypto world Bitcoin has run up over 604% year to date. But that pales in comparison to Ethereum’s 3,562% gain this year.

Naturally, these sorts of monstrous returns in such a short period of time spark heated debate. In fact, many financial pundits and crypto advocates have scrambled to argue whether Bitcoin is a bubble or not.

So as the financial community takes sides, I decided to dig into Bitcoin’s tremendous run using nothing but hard data to see whether it’s in bubble territory or not. (Meanwhile, I highly recommend you download our exclusive special report, Investing in the Age of the Everything Bubble, from Wall Street veteran Jared Dillian.)

Bitcoin’s Performance Dwarfs Tech Stocks’ Run in the 90s, but This Bubble Is Nowhere Near the Dot-Com Mania

The Bitcoin run has drawn comparisons to the dot-com bubble of the late 1990s. While the sentiment and underlying forces of both bubbles may be similar, their performance is a different story. 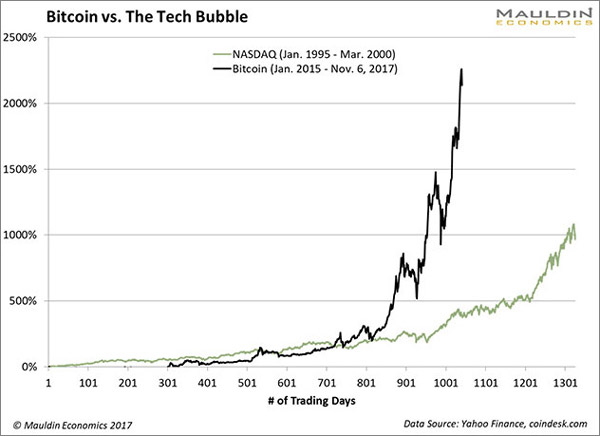 Bitcoin’s run has far outpaced the tech bubble, and its returns have already dwarfed dot-com mania.

Now, crypto advocates argue that Bitcoin has tranformative fundamentals so the returns are justified.

I don’t deny that blockchain is a transformative technology that will eventually revolutionaize the finance industry. But the mainstream adoption of the Internet in the 1990s was a paradigm shift, too.

The widespread adoption of any tranformative technology has ups and downs and takes way more time than people think. These things don’t happen overnight.

For example, one of the hallmarks of the dot-com bubble was Pets.com, an e-commerce site for pet supplies. The company launched in August 1998 and went bankrupt by Noveber 2000, wiping out $300 million in investment capital in the process.

Ordering pet supplies online wan’t necessarily a bad idea. Amazon fulfills that very same need to millions of people today. But it took more than a decade for Amazon to grow and scale the business into the viable service it is today.

During the dot-com crash, the NASDAQ composite lost 78% of its value, wiping out trillions of dollars between March 2000 and October 2002. With a total market cap near $200 billion, cryptocurrencies are nowhere near the dot-com stocks of the late 1990s.

This means that it won’t take a whole lot of new capital to push Bitcoin even higher. But until Bitcoin matures, its price appreciation is only speculation.

No, Bitcoin Does’t Have the Capacity to Disrupt the Fiat Monetary System

A common argument for Bitcoin is that a decentralized digital currency has the power to disrupt the fiat monetary system. However, it does not—as of yet.

There were just over 11 million Bitcoin transactions in the second quarter of 2017. That may not be an all-encompassing figure due to the decentralized nature of Bitcoin, but it provides some important perspective. 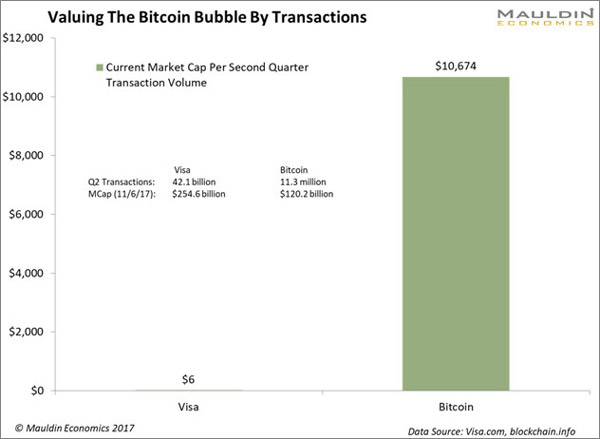 There is also the matter of energy consumption. There are thousands of computers performing complicated math problems in order to “mine” new bitcoin, which consumes huge amounts of energy.

The Digiconomist has created an index that estimates Bitcoin energy consumption. According to their estimates, the amount of electricity used for one single Bitcoin transaction could power 8.12 US households for 1 day.

The number of US households that could be powered by Bitcoin is estimated to be over 2.3 million. The Digiconomist also made a back-of-the-envelope estimate of Visa’s total energy consumption at 50,000 US households.

Bitcoin clearly has some major efficiency hurdles that it needs to overcome before it can compete as a legitimate currency.

The Crypto Bubble Is Driven by Speculation, Not Its Tranformative Potential

Blockchain technology may someday become a widespread alternative currency. But Bitcoin’s rally appears to be driven by price speculation rather than its potential as legal tender.

One defining pillar of a currency is its ability to act as a store of wealth. However, Bitcoin is anything but a reliable store of value. 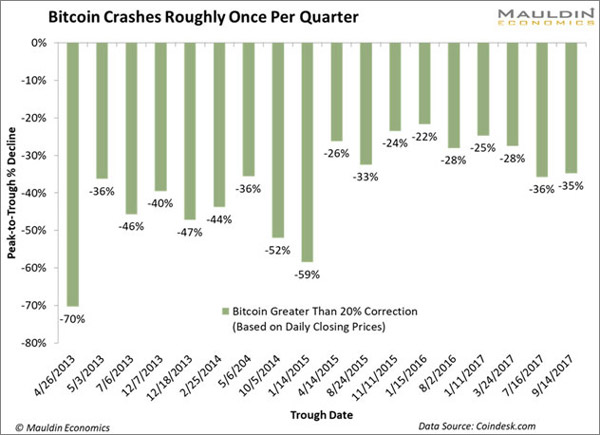 Today, Bitcoin is extremely volatile. It has at least a 20% correction once every three months. Bitcoin has had a 30% or more correction 12 times in the last four years.

Initial Coin Offerings Are Springing Up Like Crazy, But Nobody Is Using Them

Bitcoin’s jump into the mainstream vernacular hasn’t gone unnoticed. This led to explosive growth in new cryptocurrencies this year. In fact, 472 of the 1,213 cryptocurrencies just started trading this year—attracting $3 billion in capital. 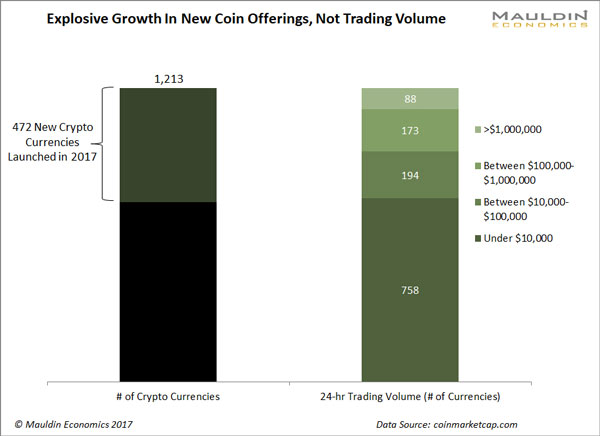 According to 226 ICOs analyzed by Token Report, only 20 of the currencies are actually being used for something other than trading. The rest are purely speculative trading instruments.

As I said before, Blockchain is a transformative technology that is likely to disrupt the finance industry sooner or later. But it’s still in its very early stages, and today’s cryptocurrencies may suffer the same fate that tech giants like Pets.com faced in the dot-com crash.

Grab Jared Dillian’s Exclusive Special Report, Investing in the Age of the Everything Bubble

Now, he’s staking his reputation on a call that a downturn is coming. And soon.

In this special report, you will learn how to properly position your portfolio for the coming bloodbath. Claim your FREE copy now.