The US housing market is BOOMING.

This past month the number of Americans looking to buy a new house spiked to a three-year high...

And Quicken Loans, the US’s largest mortgage lender, had its best month in 30- ears.

“The phone is ringing off the hook” CEO Jay Farner said in a recent interview.

If you bought NVR in February, nice call. You’re sitting on a 30% gain. Meanwhile the S&P 500 has barely budged, gaining 5%.

If you didn’t buy NVR yet, it’s not too late. This boom has lots of room to run... and my research shows NVR should continue to climb a lot higher.

Longtime readers will remember my housing call wasn’t popular. US housing, as we all know, crashed in 2008 and almost wrecked the global financial system. Many people lost hundreds of thousands of dollars. Some lost their jobs, their houses, their businesses.

The housing crash was perhaps the most financially disruptive event of the century. It caused a whole generation of folks to swear off housing as an investment.

As a refresher, 2018 was a terrible year for housing. Mortgage rates rose significantly for the first time in five years, which made it more expensive to buy a home. Home sales plunged. Lots of analysts warned of another 2008-style real estate meltdown.

This all led to the slaughter of US homebuilding stocks. 2018 was their worst year since the 2008 financial crisis! The US Home Construction ETF (ITB) plunged 32%, as you can see here: 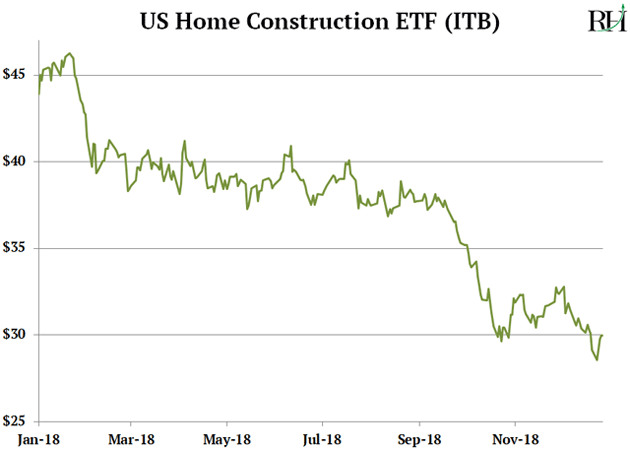 Housing affordability is a primary driver of home prices. And housing is still very affordable for most Americans.

The National Association of Realtors affordability index takes three key metrics—home prices, mortgage rates, and wages—and boils them down into a single number.

This number tells us if average folks can afford a home. When affordability drops too low, the average American simply can't afford to buy. That often forewarns a housing bust. 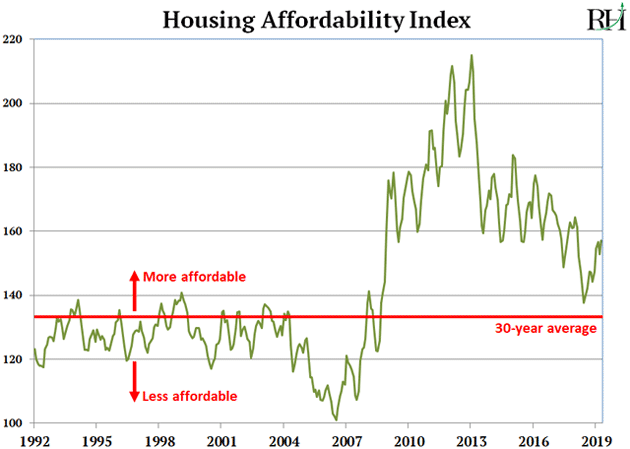 You can see affordability is well above the 30-year average, as shown by the red line.

This is key because every housing bust in the past 50 years happened when affordability was below 120. We’re nowhere near that level today... which tells us the risk of a “bust” is virtually zero.

Have you heard this “fact?”

Today’s generation of young adults, known as “millennials,” don’t want to own houses like their parents did. Instead they’ll rent for life. This lack of young buyers, the story goes, will put a cap on house prices.

This is nonsense. The data shows it isn’t just false… the total opposite is happening.

At the same time, the number of Americans who own their own home has jumped in the past three years. That’s significant as the rate had been plunging for over a decade.

As for the number of folks renting rather than owning a house, the number has plunged for three years in a row.

In other words, folks are buying houses faster than any time in the past 30 years.

Millennials are waiting longer than their parents to have kids. But once they have kids, they’re buying houses... just like every generation of middle-class Americans before them did.

Pew Research data shows the average age of a first-time home buyer is 31. This year the average millennial will turn... 31!

There’s a shortage of homes in America.

After the 2008 housing bust, tens of millions of vacant homes were for sale. That’s no longer the case. It would take only six months to sell every existing home on the market today, as you can see here: 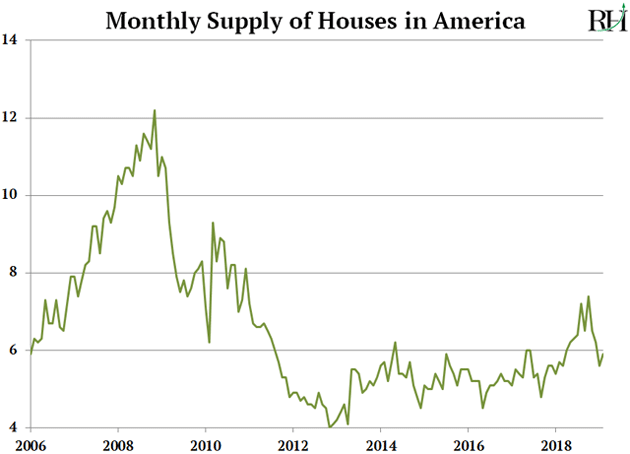 The seeds of this shortage were sown in 2008. In the boom leading up to the bust, US homebuilders built record numbers of houses. Four million new houses went up in 2004 and 2005 alone—more than any other two year period in US history!

As you know, the market turned south in 2006, demand collapsed, and US homebuilders lost their shirts. America’s largest homebuilder, D.R. Horton (DHI), tanked 86%.

The housing bust seared one thing into homebuilder’s minds: don’t overbuild EVER again.

So for the past decade they’ve been conservative. Census Bureau data shows an average of 1.5 million homes were built each year since 1959. Yet since 2009 just 900,000 homes have been built per year.

As I’ve explained, NVR is unlike any other US homebuilder. In short, most homebuilders buy raw land then build houses on it. NVR never buys raw land. It only buys developed land, which removes a lot of risk. This unique approach helps it avoid the riskiest part of the housing business.

When I recommended NVR back in February, it was trading at just 13-times earnings—its cheapest level since 2009. Because the stock has jumped 30% since, it’s no longer a “steal.” But it’s still a great buy, and it’s still dirt cheap.

NVR achieved excellent profit growth of 40% last year, and its stock has been on a tear since the start of the year, as you can see here. 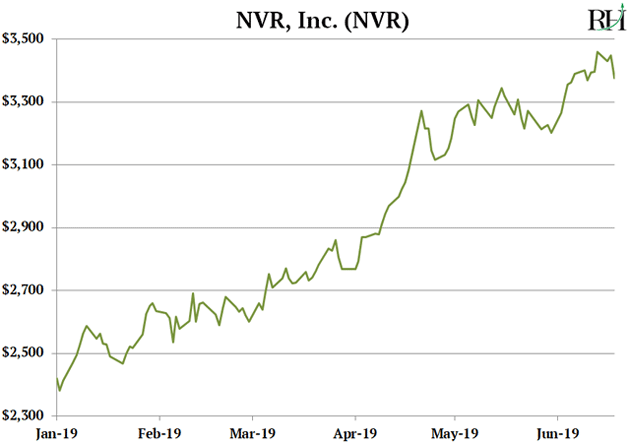 Do you own any homebuilders—or other housing stocks? Tell me at stephen@riskhedge.com.

Stephen McBride is editor of the popular investment advisory Disruption Investor. Stephen and his team hunt for disruptive stocks that are changing the world and making investors wealthy in the process. Go here to discover Stephen's top "disruptor" stock pick and to try a risk-free subscription.