Brett Velicovich had one job:

Hunt down the most dangerous terrorists in the world.

At the age of twenty-five, he regularly decided whether men lived or died.

In the span of four months, his team killed 14 of the FBI’s 20 most wanted terrorists.

But Brett and his team weren’t out hunting bad guys on foot.

In fact, they never spent much time on a battlefield at all…

Drones are unmanned planes that a pilot controls remotely.

US military drones are different animals. They can glide through the sky at 300 miles/hour…. carry 4,000 lbs. of bombs… and cost up to $17 million apiece.

From a safe room in Creech Air Force Base, Nevada, pilots like Brett use drones to hunt terrorists 7,500 miles away in Afghanistan.

And one little company makes the “brains” of these important machines.

It’s growing faster than any military stock I’ve ever seen.

And it’s set to soar as it wins billions of dollars in defense contracts over the next few years.

And the companies drinking from this firehose of government money have been great investments. 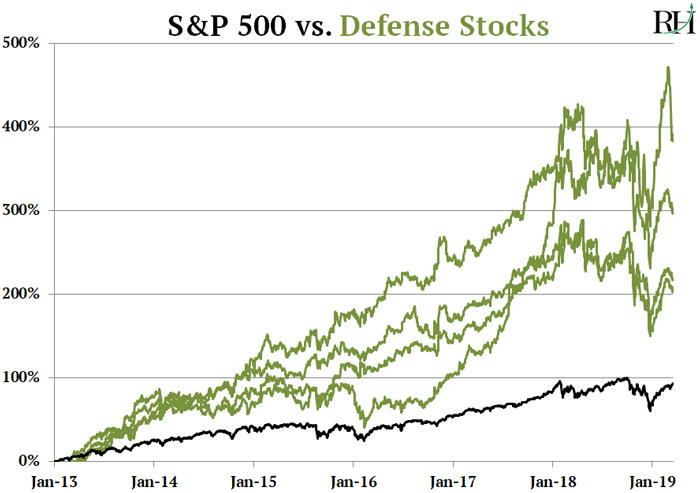 You can see that shareholders have made a killing on the back of all those defense dollars.

The US government, as you may know, is the world’s biggest spender. This year it’ll shell out a record $4.7 trillion.

While this is nauseating for those of us who pay taxes, it’s a wonderful thing for companies that sell products and services to the government.

These days one of the surest ways to get rich is to figure out how to tap into the never-ending flow of government cash.

Lockheed Martin and Boeing have figured it out. As the two largest military contractors, they’ll collect $72 billion from the US government this year alone.

As you saw above, both have crushed the S&P 500 for many years. But I’m not recommending you buy either today.

Instead, I’m recommending a little company 1/70th the size of Boeing that’s shaping the future of warfare.

Its chips power ALL the American military’s largest and most deadly drones.

They also enable other cutting-edge equipment like Patriot missiles, F-16 fighter jets, and the Navy’s “track and destroy” combat system.

As I explained a while back, computer chips are the “brains” of electronic devices.

Mercury’s state-of-the-art chips give drones a God-like view of the terrain below. They allow the drones to process what its cameras see in real time.

This helps them to pinpoint the location of suspects, track multiple vehicles, and make absolutely sure they’ve homed in on the right target before launching a deadly attack.

In fact, drones make up over half of Department of Defense aircraft today.

Spending on drones is growing faster than any other military program and will hit a record $9.5 billion this year.

Mercury Systems is growing into a dominant player in defense electronics. Yet it’s worth just $2.9 billion—too small for inclusion in the S&P 500.

This combination—small firms disrupting large markets—is exactly what we look for at RiskHedge. These are the kinds of stocks that could double or triple quickly and still have lots of room to grow.

Mercury is on pace to earn $500 million in sales this year. Even if it grows sales 10x, it would still control less than 5% of its target market.

And it stands to collect billions more as it wins military contracts in the coming years.

Earlier I mentioned that defense companies that sell to the US government have been great stocks to own.

Well, in the past five years, Mercury’s performance has crushed all those big defense stocks.

You can see how Mercury has outperformed them by 2x, 3x, 4x on this chart: 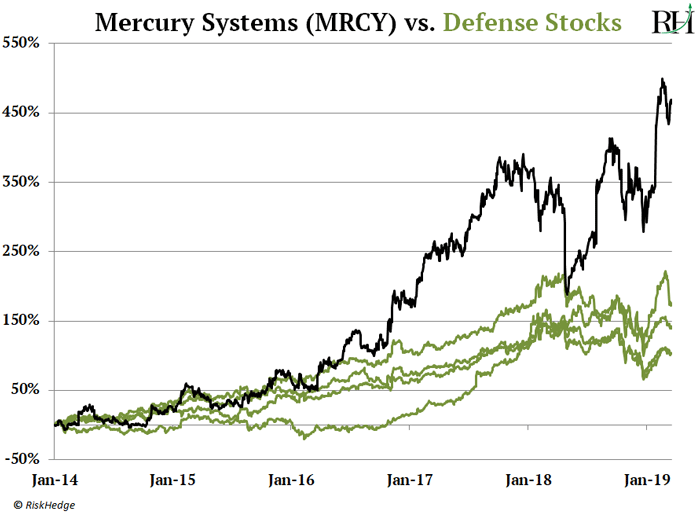 It has achieved these gains by growing sales 163% in the past three years.

As I said, it’s the fastest-growing military stock I’ve ever seen.

Mercury Systems has been on a tear since the start of the year, soaring 24%.

Because it has climbed so quickly, I wouldn’t be surprised if it takes a short-term breather soon.

But as military spending on drones and other cutting-edge equipment explodes over the coming years… I see Mercury’s stock climbing much higher.