I met a handful of you at the Strategic Investment Conference in Dallas a couple weeks ago.

Although RiskHedge readers tend to be serious investors, most don’t invest for a living.

I met an airplane pilot… a doctor… an aerospace engineer.

And almost everyone asked me the same question:

Today, I’ll tell you about two big new developments in 5G—and what they mean for your investments.

For a refresher on why 5G is a huge moneymaking opportunity, see here and here.

In short, 5G will supercharge America’s wireless networks. It will give us internet speeds 1,000x faster than today’s.

This will open up a whole new world of disruption.

Think of 5G as a “tool” that will enable tomorrow’s disruptive businesses.

For example, how many of the following do you use?

The last wireless upgrade—4G—is the driving force behind them all.

4G arrived in the early 2010s and brought us much faster speeds. With that came the ability to do things like watch movies, stream music, or shop from anywhere on your phone.

5G will be MUCH bigger than 4G.

4G was an upgrade. 5G is a total overhaul. It’s going to enable transformative disruptions like self-driving cars and remote surgery.

As you may have heard, the US Government recently banned Chinese telecom giant Huawei from doing business in the US.

I warned you back in February this was likely to happen.

My prediction ruffled some feathers. Huawei reps even contacted me to insist I was wrong!

Huawei is the world’s second-largest phone maker, behind only Samsung. It stands accused of placing secret “backdoors” in its equipment. If true, these backdoors allow the Chinese government to spy on Americans who use Huawei’s gear.

Huawei is a private company. It has no publicly-traded stock. But its ban rocked markets all the same...

You see, Huawei buys a ton of parts from American companies. It bought $20 billion worth of computer chips from US companies last year, according to investment bank Evercore.

US chipmaker Qorvo (QRVO) gets 13% of its revenue from Huawei...

And facial recognition company Lumentum (LITE) gets almost 20% of its sales from Huawei.

As you can see in this chart, all three stocks tanked on the news. 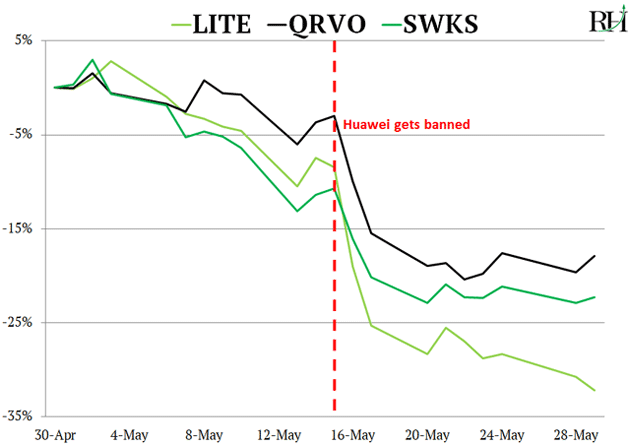 Huawei is the world’s largest maker of 5G infrastructure.

It had secured $100 billion worth of 5G contracts—more than five times any of its rivals.

But with Huawei all but banned from the Western world, those contracts have been torn up.

As explained awhile back, only two other companies can step up to fill the void:

You can see in this chart that both stocks jumped when Huawei’s ban was confirmed... and they’ve continued to march higher. 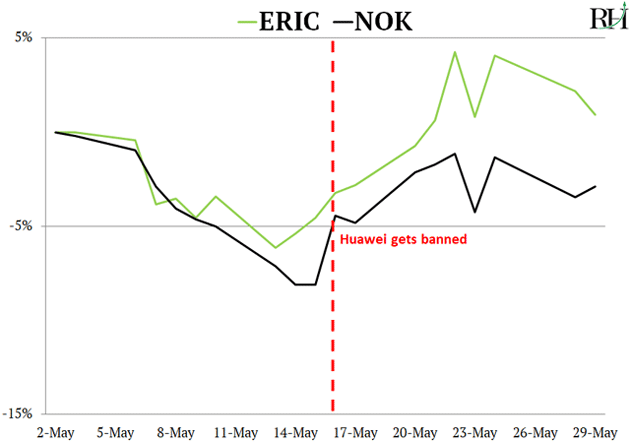 For reasons I explain in my premium service Disruption Investor, buying Ericsson stock is the best way to play this.

The average American pays over $80/month to their cell carrier, according to research from Doxo.

If you live in America, I can almost guarantee you use one of four carriers: AT&T (T)… Verizon (VZ)… T-Mobile (TMUS)… or Sprint (S).

These four have the US cell market on lockdown. They own 98% of the $260 billion/year market.

The US government has always been leery of letting phone companies grow too powerful. If too much power concentrates with too few companies, they can take advantage of customers.

When the old AT&T got too big back in the 70s, the government broke it up into seven smaller companies.

The government has also blocked several phone company mergers. In 2011, it shot down AT&T’s attempt to buy T-Mobile.

Sprint and T-Mobile are America’s third- and fourth-largest cell companies.

The stocks of all four US cell companies jumped higher on the news. Sprint shot up 25% in a single day.

With this merger, three companies will effectively control the whole US cell market.

Why would the US government allow this?

The US government, and the Trump administration in particular, have been adamant that the US be first in 5G. In April Trump said: “The race to 5G is a race America must win.

A 2019, GSM Association report estimates US cell companies will have to spend $100 billion over the next two years to get America 5G ready.

In short, T-Mobile and Sprint didn’t have the cash to build their own 5G networks. So they’re joining forces to build one giant network.

According to one estimate, the merger will boost the number of 5G markets Sprint and T-Mobile can serve by 8x.

As we all learned back in school, gravity is an invisible force that pulls objects toward each other.

The earth’s gravity keeps your feet planted on the ground… and makes apples fall from trees.

Like gravity, 5G is a hidden force affecting everything right now.

It’s a key reason why the US government blacklisted Huawei…

It’s why the government made the unusual move to greenlight the Sprint / T-Mobile merger.

And keep in mind, the 5G buildout is still only in first gear. 5G will cause massive disruption as it comes online in the next couple years.

Do you know anyone who has a 5G connection or a new 5G phone yet? Tell me at Stephen@riskhedge.com.