“Sell everything, I can’t take anymore!”

My stockbroker friend got a phone call from a hysterical client on Christmas Eve.

She was panicking over all the money she had lost in the market… and was demanding to sell her whole portfolio of stocks.

December, as you surely know, was horrendous for U.S. markets.

The S&P fell 10% for its worst December since 1931 during the Great Depression.

In fact, it was the S&P’s worst month overall since February 2009.

That nine-year winning streak is now over. On Monday the S&P closed out 2018 with a 6% loss.

All this bad news has many investors freaking out that a dreaded “bear market” in stocks has arrived.

If we are in a bear market, there’s likely more downside from here. In the 10 bear markets since the 1920s, stocks fell an average of 32% from their highs.

Meanwhile the S&P has already fallen 17% since peaking in September 2018.

So if we’re in for an “average” bear market, stocks should continue falling.

And I’ve heard from a lot of readers who are nervous stocks are headed for a full-blown crash.

So in the rest of today’s letter, we’re going to look at how “disruptor” stocks perform in a worst-case scenario…

Like when U.S. markets cratered 57% during the 2008 financial crisis.

“Disruptors” are not ordinary stocks. They don’t come in and compete with industry leaders. They destroy them.

Buy a disruptor early on, before it becomes a household name, and you’ll often stand to make profits of 1,000% or greater.

Remember when you had to talk to a travel agent to book a vacation?

Now you can book a whole trip from your computer in under ten minutes.

Priceline was the main driving force behind this disruption.

Its online booking platform dominates the $240 billion global travel services industry. Close to half of all vacations booked online today are booked through Priceline’s network of websites.

Back in 2007, just before the financial crisis, Priceline was still a small firm with just $140 million in sales.

Let me repeat that…

During the darkest days of the worst financial crisis since the Great Depression, Priceline’s business didn’t just hold up...

It grew faster than ever. 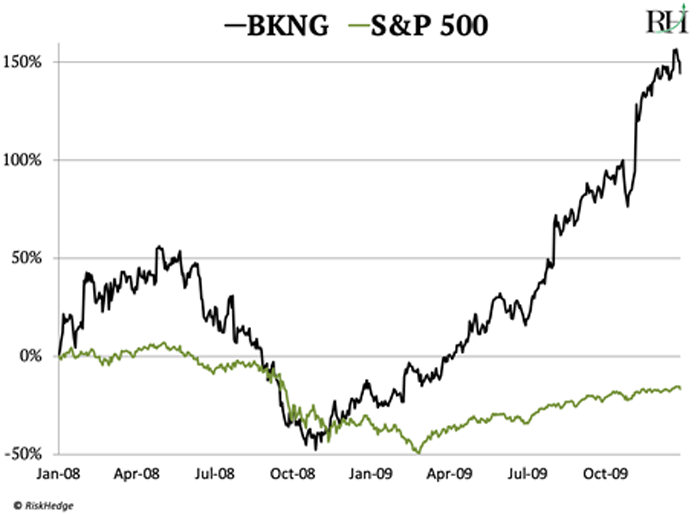 A few months ago we talked about a super-profitable business called the cloud.

Salesforce.com (CRM) pioneered this business two decades ago. Today over 150,000 clients pay Salesforce a monthly fee to use its customer relationship tools. Investors who got into Salesforce stock early booked profits up to 1,750%.

Like Priceline, Salesforce’s profit and revenue growth powered right through 2008 and 2009.

During this period the average S&P 500 company’s earnings tanked by -77%.

Look at the chart below. You’ll see that after markets bottomed in 2009, Salesforce stock rocketed six times higher than the S&P by the end of 2010. 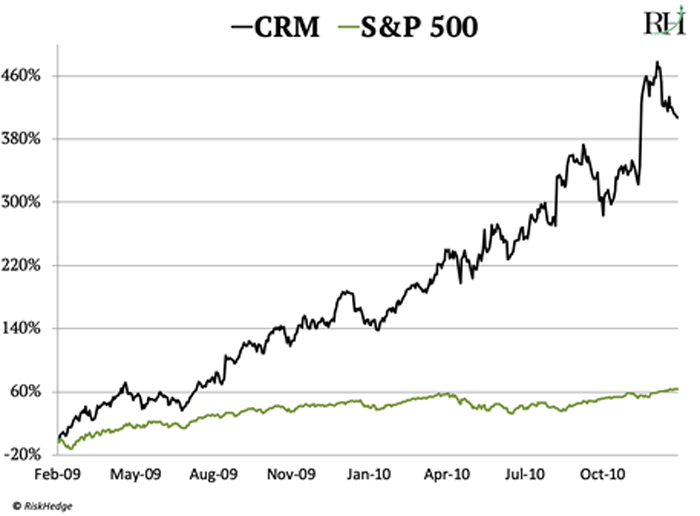 Iconic American stocks like Lehman Brothers, Bear Stearns, and Merrill Lynch couldn’t survive 2008. How did these disruptors do it?

It comes down to the difference between a business and a stock price.

The father of “value investing” Benjamin Graham once said:

“In the short run, the market is a voting machine. But in the long run, it’s a weighing machine.”

But ultimately, business performance is what matters.

As I mentioned, their profit engines kept on purring right through the 2008–2009 meltdown.

To put some numbers to it, say you had invested 10,000 bucks each in Priceline, Salesforce and Amazon at the beginning of 2008.

Your investment was dead money for over four years.

Look, I doubt we’re headed for a crushing bear market like 2008.

But if we are headed for stormy markets… I want to own disruptor stocks that will power right through it.

Where do you think markets are going in 2019? Tell me at stephen@riskhedge.com.