At that point, the novel coronavirus had killed a total of 689 Americans. Now, a little over a month later, 689 deaths would be a really good day. And America still isn’t open for business. But the president and some governors think it should be and are trying to make it so.

Unfortunately, politicians can’t order the economy open again because they didn’t close it. Consumers and businesses began shutting down long before they were forced to, and they won’t re-open just because they legally can.

This is way more complicated than many people think… which means it will take time. 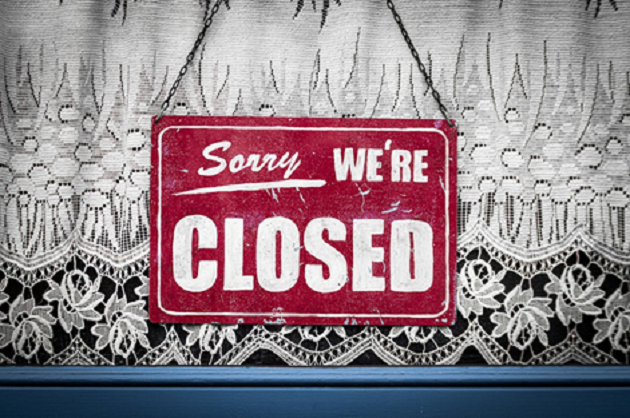 The news cycle is moving so fast it’s hard to remember what happened last week, much less last month. So let’s review.

In early March, companies and local officials had already cancelled many conventions and other large events. Then several important things happened on Wednesday, March 11.

The president’s address, combined with the popular, well-known Hanks becoming ill, and the NBA’s drastic action, suddenly made the coronavirus threat seem “real” to millions.

All this happened before the first mandatory stay-at-home orders, which were in California’s Bay Area on March 16.

The idea that “Big Brother” government closed everything is incorrect. The orders simply codified what was already happening. 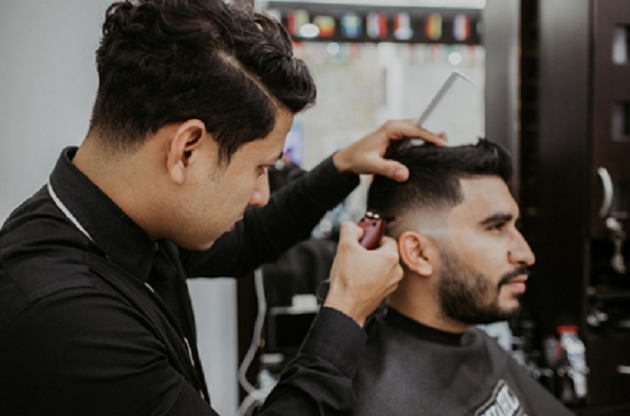 The hardest-hit businesses are those that put people in close proximity to unknown others: airlines, restaurants, hotels, retailers, hair and nail salons, etc.

Your odds of encountering an infected person are much higher in those places. Avoiding them is perfectly rational if you want to avoid the virus. That’s why many businesses closed before being ordered.

What will bring customers back?

Well, they need to be convinced that visiting those businesses won’t make them sick. Or, to use economic terms, people must perceive a favorable cost-benefit ratio. The reward has to outweigh the potential harm.

Survey data says most Americans don’t think we are there yet. Here’s a CBS News nationwide poll conducted April 20-22. 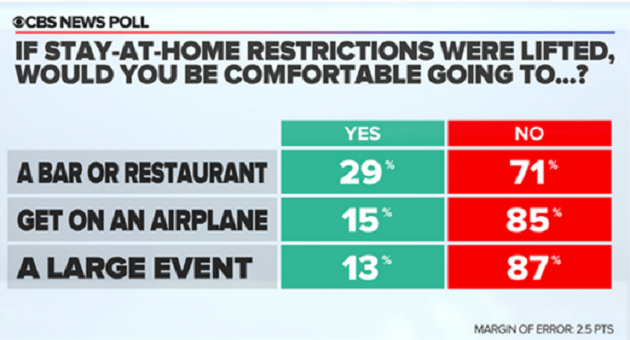 A large majority seem uninterested in venturing out to nonessential places. That probably won’t change until they feel safe.

Now, there are things businesses can do to reassure customers—extra cleaning, temperature checks, and so on. They help, but they also have a cost. Often, it won’t outweigh the additional revenue it generates.

So financially, the smartest things many businesses can do is stay closed until they are confident customers will come back and spend freely.

Restaurants and retailers can’t re-open without workers who must be paid. Presently, many of those workers are furloughed and receiving (or hoping to receive soon) unemployment benefits.

Those benefits are now extra-generous, thanks to Congress and President Trump. In some states, they are equivalent to a full-time job at $25/hour. That’s more than many laid-off workers were making before (and more than some “essential workers” are making now).

How, then, is the employer supposed to lure them back? “Come back to work, Joe. You’ll make less money, have to wear a mask all day and might still get the virus and die.” Not very compelling.

Business owners have to think about liability and reputation, too. What if people get the virus in your restaurant? That’s another unknown and only partially controllable cost.

It’s a giant chicken-and-egg quandary. Customers can’t go to a business that’s closed, but the businesses have no reason to open unless they think customers will come, and maybe not even then.

Government isn’t keeping the economy closed. The people who compose the economy are keeping it closed, by their own free choices.

No matter what governors say, no matter what the president says, business as usual is not coming back as long as this coronavirus is still a significant health risk. And it will be until we get effective treatments, a proven vaccine, or herd immunity.

It could get even worse.

Some states are relaxing the lockdowns. I think most businesses will stay closed, but some will re-open. Some customers will visit them, too.

Two or three weeks later, we may see hospitalizations and deaths jump higher. Then the lockdowns will come back and people will be even more frightened than they are now. The deep recession that was already coming will be even worse.

We’ll know soon if the risk was worth it.

I really give very little weight to those “what if” surveys.  Most people say one thing, and do another.  Remember, most peopled weren’t worried about the virus at the beginning…they are now, and shortly that’ll change too.