That’s correct in many ways, but not every way. Let’s talk about those living standards.

According to Investopedia, standard of living refers to “the quantity and quality of material goods and services available to a given population,” typically measured by per capita Gross Domestic Product.

All well and good, but to have a standard of living you must be living. The amount of life a typical person gets varies considerably around the world… and the US isn’t first on the list.

Worse, American lifespans relative to peer countries are getting shorter despite our spending vastly more money on healthcare.

This is a serious problem. In fact, I’d argue it is the worst long-run economic problem a country can have. Wealth ultimately comes from human creativity. A country that can’t keep its people alive will eventually lose its competitive advantage.

We Americans have a big problem… and we don’t even know why. 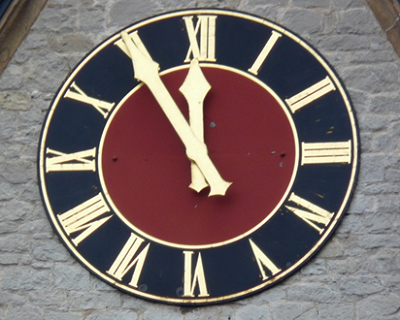 Life expectancy may be the ultimate economic indicator. It’s why we commonly wish both prosperity and long life to our friends. They go together.

Predicting how long any given person will live is usually tough. Across a population, though, it’s highly predictable. That’s why life insurance is possible.

Here’s an interesting chart I shared with Over My Shoulder subscribers last month. It shows life expectancy for the US vs. a group of comparable countries (i.e., all the OECD members except the US). 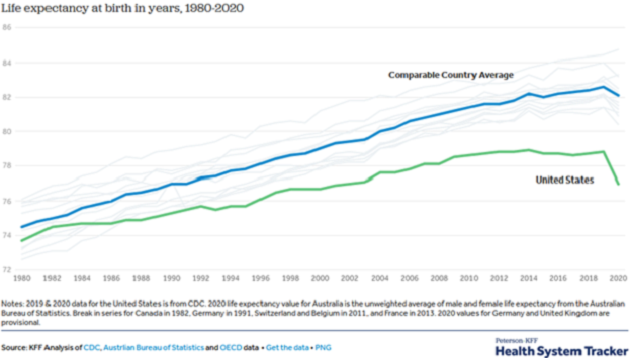 You can see how both lines turned lower in 2020, due mainly to COVID deaths. But the prior 40 years are more important. We see two things:

Note, this is life expectancy at birth, meaning how long a person born that year should expect to live, assuming that year’s prevailing conditions continue. We know they won’t, but it’s a useful tool for comparison.

In 1980, the US was less than a year below average and was ahead of Austria, Belgium, Germany, and the UK. By 1992 the US had the lowest life expectancy in the OECD, and the gap has kept widening. As of 2020, the average non-US OECD infant could expect to live 5.1 years longer than the average American born that year.

Here’s another chart, drawing on a different data set and going back to 1960. These are G-7 advanced economies. And again we see the US with the lowest life expectancy in the group since the 1980s, by a growing margin. 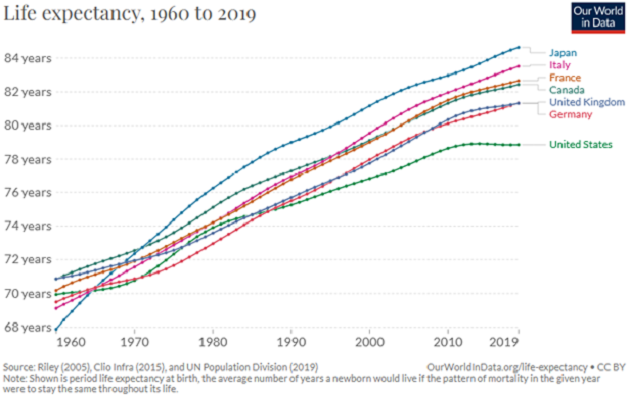 It’s interesting, and maybe not coincidence, that both sources show something seems to have changed in the 1980s. US life expectancy had been growing broadly in line with its peers. Then it started lagging. What could it be?

We definitely can’t blame healthcare spending. If anything, we spend too much relative to the inferior results we get. Here’s a plot of life expectancy vs. health expenditures in the G-7. 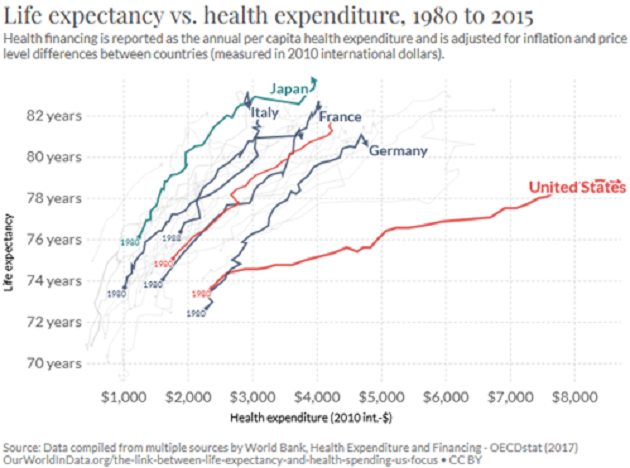 In the US we spend way more on healthcare than peer economies, and it hasn’t bought us any more life.

What is going on? It looks like some kind of cultural or public policy changes occurred in the US in the 1980s that didn’t occur in these other countries.

My best guess is that it’s something about our diet. Obesity is far more common in the US than in other developed countries, and the timing is about right.

(Incidentally, it was 1984 when Coca-Cola and Pepsi switched from cane sugar to high-fructose corn syrup. That might be relevant.)

But there’s also considerable variation within the US. Here’s a map showing life expectancy by state, as of 2019. The darker red shades are longer life expectancy states. 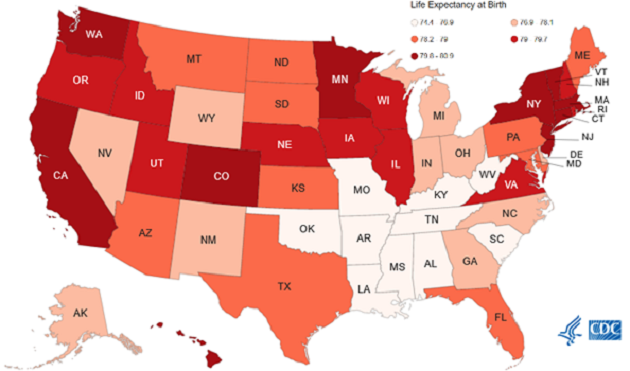 In 2019, US life expectancy at birth ranged from 74.4 years in Mississippi to 80.9 years in Hawaii. So at least in parts of the US, life expectancy is comparable to the other G-7 and OECD countries. Why not everywhere?

We Need to Fix This

Economically, there’s another wrinkle to all this. It matters what long-lived people do with their extra years. If longer life expectancy simply means longer retirements at the expense of younger generations, then maybe the benefit is limited.

On the other hand, retired people are still consumers. Their spending creates jobs. And if they also remain productive during their elder years—as is increasingly the case—then having more of those years should be an economic plus, and more so in the countries with the longest life spans.

Which is why the US needs to figure out what we’re doing wrong and fix it. That gap isn’t going to shrink by itself.