Okay, that’s an exaggeration… but it certainly feels like it. In any case, I’ve read enough to know opinions are all over the place. Whatever your desired scenario, some expert says it’s a sure thing.

A forecaster’s greatest challenge is separating what you want to happen from what you think will happen. There’s nothing wrong with wishing events will turn out favorably. But that desire shouldn’t keep you from accepting the facts and their likely consequences.

I think John Mauldin got the right balance in his 2018 forecast, Economy on a Roll. After helping John with research for that letter, I mostly agree with his conclusions. I say “mostly” because I am not quite as optimistic for 2018.

John and I both think this year’s top risk is a miscalculation by the Federal Reserve—specifically, that it will tighten monetary policy too much.

As I’ve thought about it and read other forecasts, I have a slightly different view. Here’s the key question: if the average worker’s paycheck grows, is it good or bad for the economy?

The answer is less clear than you might think. 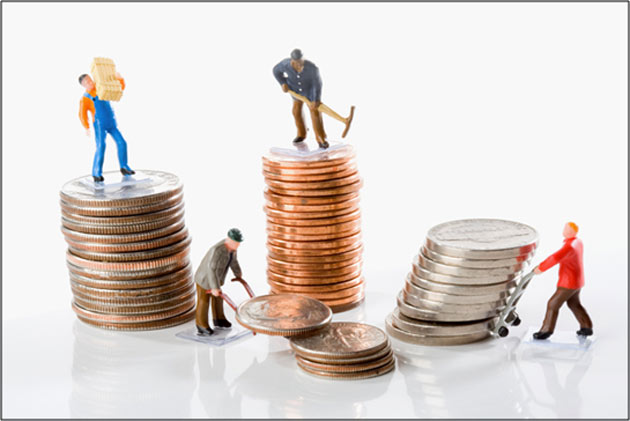 Before we go on, a small mea culpa. I didn’t think the Republicans would manage to pass a tax cut in 2017. They did, albeit after taking almost the whole year.

The bill they passed also has more short-term stimulus than I thought possible. Several provisions give businesses an incentive to expand capacity. It’s not much and won’t begin to cover the added debt the tax cuts produce, but it will help.

However, the more salient issues are jobs and wages.

The Fed is hiking interest rates because its experts believe the economy is close to “full employment,” and the Phillips Curve says wages should start rising any minute now.

Economists have been scratching their heads trying to understand why wages aren’t already shooting higher. If qualified workers are so hard to find, why don’t employers offer higher pay to attract more?

One possibility: the untapped labor supply is more than the 4.1% jobless rate suggests.

Here’s an interesting stat you may not have seen. Most newly employed people weren’t on the books as “unemployed” right before starting their jobs. They went straight from “out of the labor force” to “employed,” because they were in school or military service, or otherwise neither employed nor seeking a job. 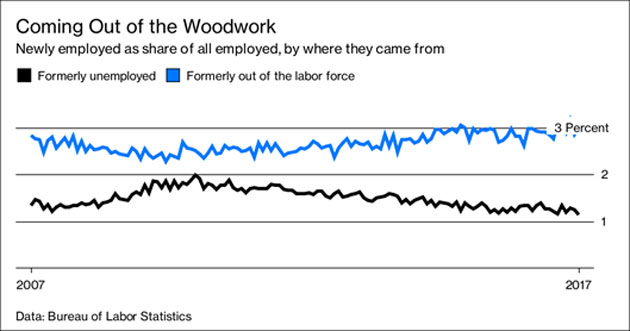 That means if you’re an employer, the available-worker pool from which you can draw is much bigger than the 4.1% of the labor force that is nominally “unemployed.” This suggests wage pressure might be farther off than we think.

Even a 2.8% wage gain wasn’t much, though, once you subtract last year’s 2.2% Consumer Price Index (CPI) inflation. Not to mention that it’s hardly an economic boom when the only way to noticeably increase your income is to work more hours.

Just as in the employment rate, wages have a lot of regional variation. They’re rising faster in cities that have below-average unemployment. You can see it in this chart, which shows that since 2008, wages rose much more in the Minneapolis and Ogden, Utah metro areas. 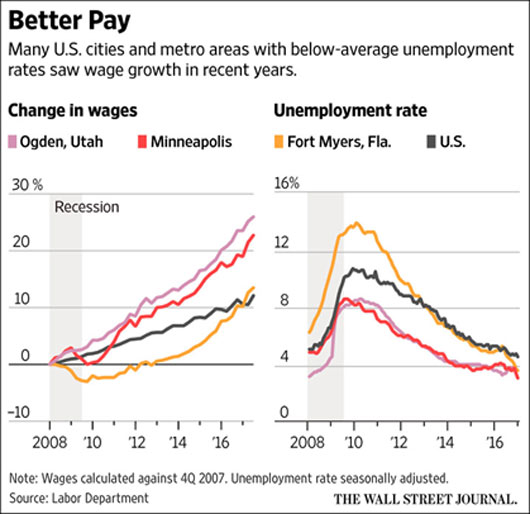 Better yet, wages are catching up in Fort Myers, Florida, where they had lagged badly for years. We need the trends to spread elsewhere, but these are encouraging signs.

Another small but positive sign was the move by some large corporations to give employee bonuses after President Trump signed the tax cuts. Was it partly a publicity stunt? Yes, but the money was real. Now we need to see those same companies and others raise regular wages and increase their headcount.

A third change is that 18 states raised their minimum wages as of this month. The Economic Policy Institute estimates the increases will mean $5 billion in additional wages to about 4.5 million workers. Here’s their full list. 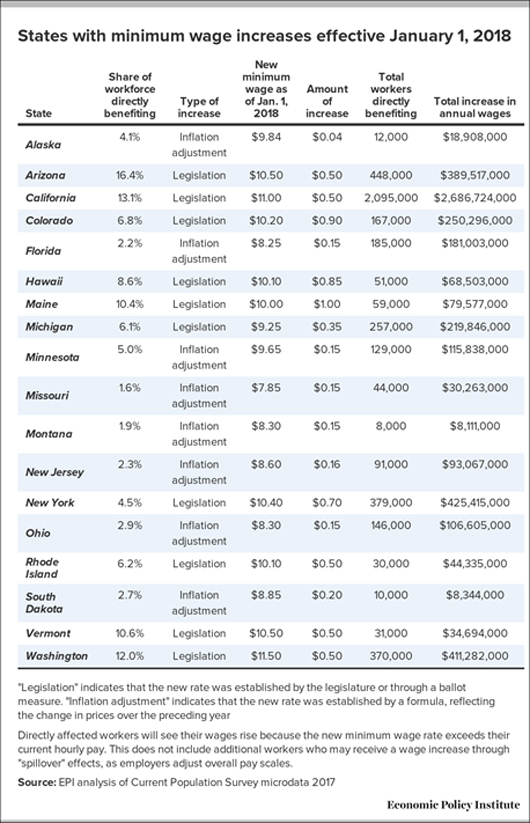 Is that enough to affect the national inflation rates the Fed is watching? Maybe not. Further, paying those higher wages may force employers to cut other expenses, leaving the overall inflation rate unaffected.

However, there may also be a spillover effect. Higher entry-level wages can force employers to raise pay further up the ladder too, in order to keep “relative” earnings the same. The numbers above don’t include this.

Watch Wages Through the Fed’s Eyes

For forecasting purposes, whatever you or I think about the wage situation is less important than what Federal Reserve officials think. The December FOMC minutes are our most recent look inside their heads.

A few participants judged that the tightness in labor markets was likely to translate into an acceleration in wages; however, another observed that the absence of broad-based upward wage pressures suggested that there might be scope for further improvement in labor market conditions.

Reading the tea leaves here, “a few” who thought wages will rise should outweigh the “another” who saw an absence of wage pressures. But is that a majority? We don’t know. Plus, the Fed will be getting new faces this year with possibly different ideas.

As of last month, the dot plots showed three rate hikes coming this year. Futures markets imply it will be less than that, maybe only two.

If that’s the plan when wage growth is at best uncertain, then it won’t take much for the Fed to hike rates higher and faster than currently expected.

That, in turn, could quickly change the Goldilocks scenarios that project everything will go just right this year, letting stock prices move up steadily. 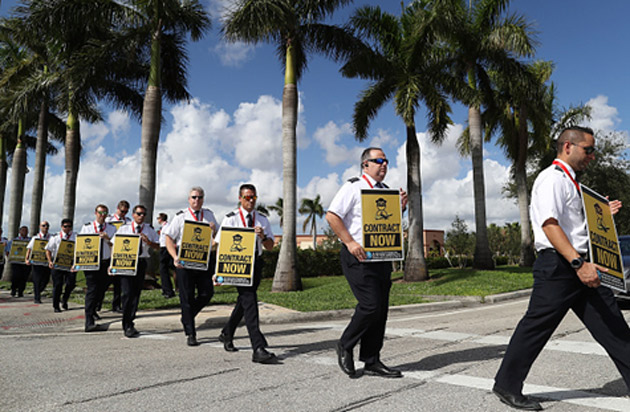 On the other hand, higher wages will put more money in workers’ pockets and give them more spending power. That will be good for the economy, even if it’s negative for stocks.

All this suggests paying attention to wage data will be important this year. It’s really the key to everything.

I’d like to see the first scenario, because I think it will be the best long-term outcome for everyone. However, I think the second scenario is closer to what we’ll get.

Other factors are also in the mix. Energy prices have spiked, for instance. That could boost inflation prospects if it persists.

Like the Fed, I’m data-dependent. I’ve told my Yield Shark readers I’ll watch the numbers and adjust accordingly. You should do the same.

Something to consider with respect to wage inflation.  Jobs/workers are being forced into a cast like reality where high demand high skilled jobs (and this includes skilled trades) are seeing significant wage growth, and mid to lower demand jobs/skills see stagnant wage growth. The reasons for this bifurcation are too numerous to elaborate here. Suffice it to say it is driven by megatrends which are not going to abate any time soon. A serious skills gap will continue to evolve and grow for some time.  It follows that demand driven wage growth will continue as well but its the smaller side of this bifurcation for now.  Until its size reaches a point where it begins to have a disproportionate impact on wage growth data for the overall workforce, its possible that wage inflation will continue to lag expectations. Also, the way employment is currently measured needs to be seriously re-assessed to reflect current workforce reality. I would question current readings as I doubt they accurately reflect the level of under employment within the ranks of the “employed”