Total unfunded liabilities in state and local pensions have roughly quintupled in the last decade. 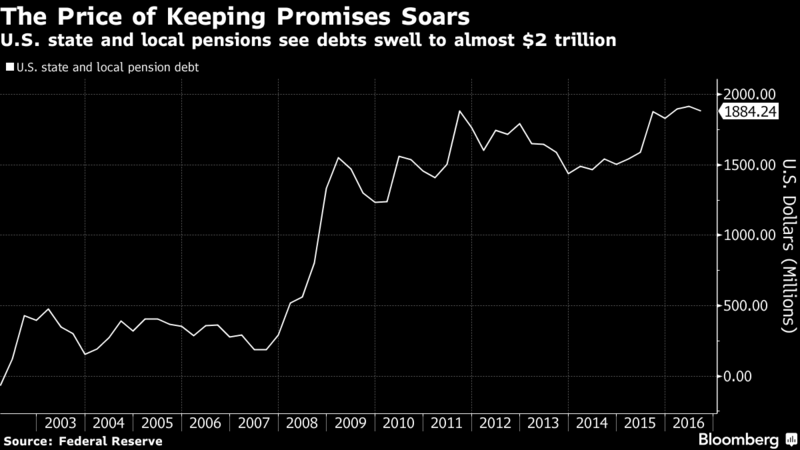 You read that right—not doubled, tripled, or quadrupled—quintupled. That’s nice when it happens on a slot machine, not so nice when it’s money you owe.

You will also notice in the chart that much of that change happened in 2008.

According to a 2014 Pew study, only 15 states follow policies that have funded at least 100% of their pension needs. And that estimate is based on the aggressive assumptions of pension funds that they will get their predicted rate of returns (the “discount rate”).

Kentucky, for instance, has unfunded pension liabilities of $40 billion or more. This month the state budget director notified local governments that pension costs could jump 50–60% next year.

That’s due to a proposed reduction in the system’s assumed rate of return from 7.5% to 6.25%—a step in the right direction but not nearly enough.

Think About This as an Investor: How Can You Guarantee 6–7% Returns These Days?

Do you know a way to guarantee yourself even 6.25% average annual returns for the next 10–20 years? Of course you don’t. Yes, some strategies have a good shot at doing it, but there’s no guarantee.

And if you believe Jeremy Grantham’s seven-year forecasts (I do: His 2009 growth forecast was spot on), then those pension funds have very little hope of getting their average 7% predicted rate of return, at least for the next seven years. 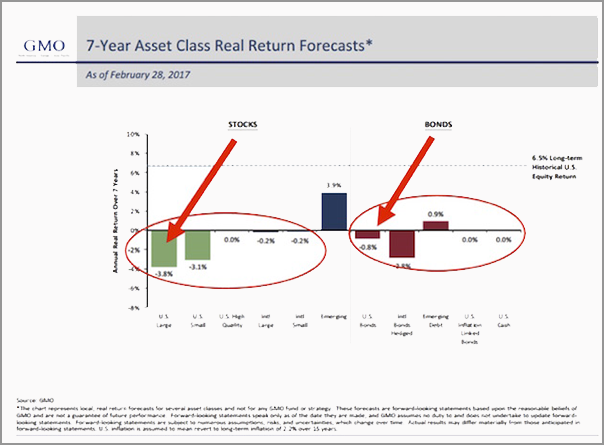 Now, here is the truth about pension liabilities. Let’s assume you have $1 billion in funding today. If you assume a 7% compound return—about the average for most pension funds—then that means in 30 years that $1 million will have grown to $8 billion (approximately).

Remember that every dollar that is not funded today means that somewhere between four dollars and eight dollars will not be there in 30 years when somebody who is on a pension is expecting to get it.

Worse, without proper funding, as the fund starts going negative, the funding ratio actually gets worse, sending it into a death spiral. The only way to bring it out of the spiral is huge cuts to other needed services or with massive tax cuts to pension benefits.

The Situation Is Dire Even in the Best-Case Scenario. But What If…

The State of Kentucky’s unusually frank report regarding the state’s public pension liability sums up that state’s plight in one chart: 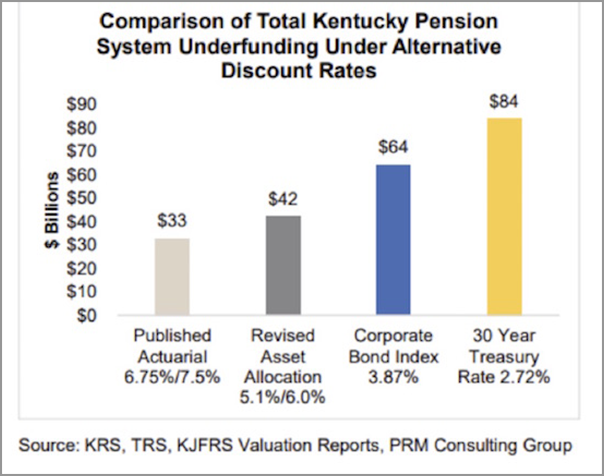 The news for Kentucky retirees is quite dire, especially considering what returns on investments are realistically likely to be. But there’s a make or break point somewhere.

What if pension plans must either hit that 6% average annual return for 2018–2028 or declare bankruptcy and lose it all?

That’s a much greater problem, and it’s a rough equivalent of what state pension trustees have to do. Failing to generate the target returns doesn’t reduce the liability. It just means taxpayers must make up the difference.

But wait, it gets worse.

The graph we showed earlier stated that unfunded pension liabilities for state and local governments were $2 trillion. But that assumes an average 7% compound return. What if we assume 4% compound returns?

But what if we have a recession and the stock market goes down by the past average of more than 40%? Now you have an unfunded liability in the range of $7–8 trillion.

We throw the words a trillion dollars around, not realizing how much that actually is. Combined state and local revenues for the US total around $2.6 trillion.

After the next recession (whenever that is), the unfunded pension liabilities for state and local governments will be roughly three times the revenue they are collecting today, and that’s before a recession reduces their revenues.

Can you see the taxpayer stuck between a rock and a hard place? Two immovable objects meeting? The math just doesn’t work.

We are starting to see cities filing for bankruptcy. That small ripple will be a tsunami within 7–10 years.

It Goes Beyond a Financial Crisis. It’s a Social, Political Catastrophe

What that really means is that the unfunded liabilities are more concentrated, and they show up in unlikely places. You think Texas is doing well? Look at some of our cities and weep.

Look, too, at other seemingly semi-prosperous cities all over the country. Do you think the suburbs of Dallas will want to see their taxes increased to help out the city? If you do, I may have a bridge to sell you – unless you would rather have oceanfront properties in Arizona.

This issue is going to set neighbor against neighbor and retirees against taxpayers. It will become one of the most heated battles of my lifetime. It will make the Trump-Clinton campaigns look like a school kids’ tiddlywinks smackdown.

I was heavily involved in politics at both the national and local levels in the 80s and 90s and much of the 2000s. Trust me, local politics is far nastier and more vicious. And there is nothing more local than police and fire fighters and teachers seeing their pensions cut because the money isn't there. Tax increases of up to 100% are going to become commonplace.

But even these new revenues won’t be enough… because we will be acting with too little, too late.