The projected total US debt will be $30 trillion within 10 years, using the CBO’s own numbers. But the CBO also makes the rosy assumptions that there will be no recessions and that GDP will grow at a 4% nominal rate.

Now, that’s possible; I'm inclined to haircut it a bit.

After the next recession the deficit will be $30 trillion within 4–5 years and then grow from there at a rate of anywhere from $1.5 to $2 trillion per year (I covered my team’s calculations in this letter).

Is it any wonder why I’m so concerned about pensions?

Social Security Is Impossible Under This Deficit

Note: That is not the CBO’s projected debt. It does not take into account the off-budget deficit that still ends up having to be borrowed. Last year the deficit was well over $1 trillion—but we were told it was in the neighborhood of $600 billion.

If any normal company tried to use accounting like the US Congress does, the SEC would rightly declare it fraudulent and shut it down immediately. 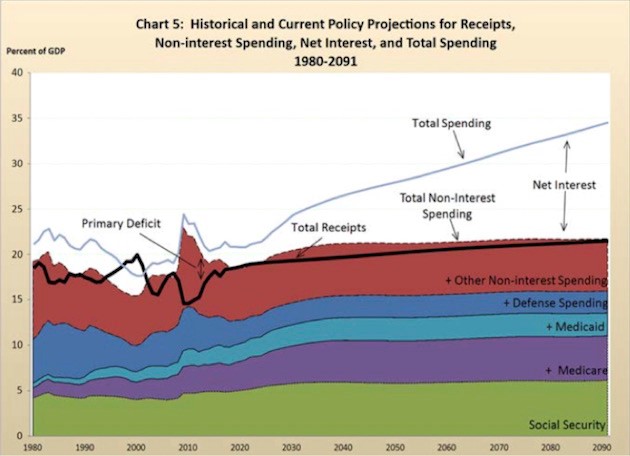 Note that this chart expresses the various items as percentages of GDP, not dollars. So the relatively flat spending categories simply mean they are forecasted to grow in line with the economy, or just a little faster.

But the space representing net interest grows much faster than GDP does—fast enough to make total federal spending add up to one-third of GDP by 2090.

Obviously, this chart is based on all kinds of assumptions, and reality will be far different. I doubt we will make it to 2090 (or even 2050) without at least one global depression or other calamity that radically resets all the assumptions.

Still, looking at the demographic reality of longer lifespans and lower birthrates, it’s hard to believe Social Security can survive over the long run in anything like its present form.

But any major change will mean that the government is breaking its promise to workers and retirees.

How Will We Fund the Deficit and Fulfill Pensions?

And now we come to the really uncomfortable part.

Larry Kotlikoff wrote in an article on Forbes that we would need an immediate approximately 50% increase in taxes to fund our future deficits. That’s what we would need to create a true entitlements “lockbox” with the funds actually in it.

But surely everybody knows by now that there is no lockbox with Social Security funds in it. That money was spent on other government programs and debts. And so when the CBO doesn’t count the trust funds as part of the national debt, they are not only being disingenuous, I think they are committing financial fraud.

The money that will actually pay for Social Security and Medicare down the road is going to have to come out of future taxes, just as for any other debt of the US.

So at some point – even though Republicans are jawboning hard about cutting taxes now – we are going to have to raise taxes in order to fund Social Security and Medicare. I personally think it will have to be done with a value-added tax (VAT), because the necessary increase in income taxes would totally destroy the economy and potential growth.

And yes, I know some of you will write back and say we had much higher tax rates in the 50s and we had good growth then, but our demographics and productivity levels were completely different in that era.

Plus, nobody actually paid the highest tax levels. I remember that in the 80s, before Reagan cut the tax rate, I had so many deductions that my effective tax rate was about 15%. The irony is that after the Reagan tax cuts, my total tax payments went up, not down – I lost all of my cool deductions! Aaah, the good old days…

Of course, Congress could always authorize the Treasury Department to authorize the Federal Reserve to monetize a certain amount of the Social Security and Medicare debt, which is essentially what Japan is doing (and seemingly getting away with it).

I think we should all be grateful to the Japanese for being willing to undertake such a fascinating experiment in monetary and fiscal policy.

Let me close with a quick sidebar note. I think the Fed’s mad rush to raise rates and reduce its balance sheet at the same time is unwise.

I mean, seriously, is the Federal Reserve balance sheet making that much of a difference to the US economy? Perhaps when that extraordinary balance was created, it did… but not today. This is one of those times when I think our policy makers should go slowly and tread carefully.