All good things come to an end, even economic growth cycles.

The present one is getting long in the tooth. While it doesn’t have to end now, it will eventually end. And signs suggest we are coming to that point.

There’s no doubt—none, zero, zip—this will happen. The main question is when.

Just a few weeks ago, I had hopes we could postpone it even beyond the 2020 elections. It could still happen. But data from the last few weeks suggest this may be more hope than reality.

And hope is not a strategy.

For the last year, I talked about our growing debt problem and how it could trigger a crisis. Excessive leverage may light the fuse, but the real problems are deeper.

A recent report highlighted an important one.

There Are Over 3,800 “Zombie” Businesses in Advanced Economies

Debt can be useful when used wisely. And wisdom begins with being able to repay it.

So, if you have a debt-financed business, you should first have enough steady revenue to cover your other expenses and the interest on your debt. Then you should have a plan to reduce that debt.

If you can’t, something is wrong. And it turns out this is far more common than most of us think.

A new Bank for International Settlements study examined a database of 32,000 listed companies in 14 advanced economies to identify “zombie” businesses.

By their broad definition, a company is a zombie if it is…

That’s a low bar. Yet 12% of the public companies they checked couldn’t pass it.

Looking only at US listed companies, about 16% qualify as zombies. So, we are actually more zombie-friendly than our average global peers. 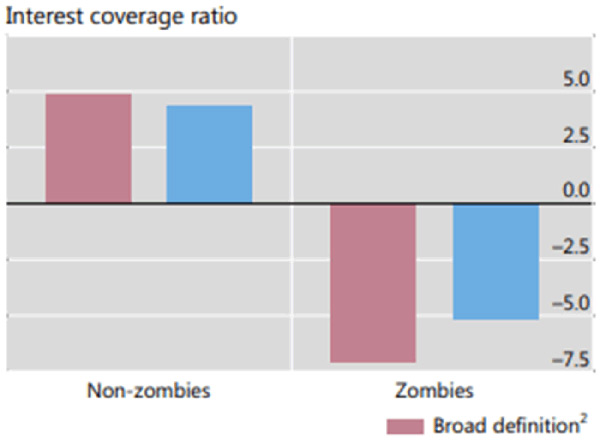 We Haven’t Had That Many Zombies Ever

They are probably separate from the “unicorns” we hear about, which are mostly equity-financed by hopeful venture capitalists.

Bankers and bond buyers should be more risk-averse than VC investors. But that does not appear to be the case.

Thousands of companies are going years with little prospect of repaying their debts. And yet, for whatever reason, the lenders see no need to stop lending to them.

Nor are these sketchy foreign companies.

Why lend covenant-light money to speculative firms like WeWork with the expectation they will repay? This is a relatively new phenomenon.

The red lines in the two charts below are the percentage of zombie companies, broadly and narrowly defined. 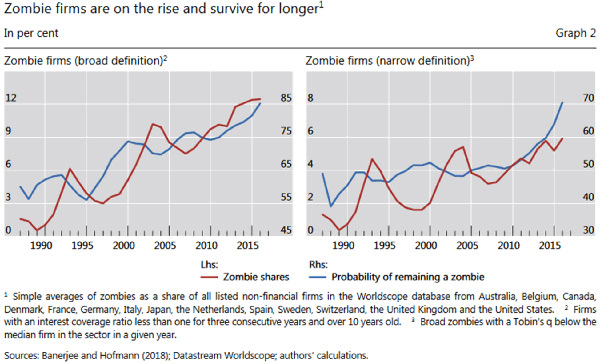 In either case, it was close to zero in the late 1980s and has climbed steadily since then. Worse, once you become a zombie company, you’ll likely remain one. Not exactly something that should comfort lenders.

But faced with a probable loss, lenders always face a temptation to “extend and pretend.” They convince themselves that soon the company will turn into a sterling borrower who pays in full and on time.

And more often than not, the zombie company has a charismatic CEO or founder who can charm lenders.

This Is How Recessions Start

Now, there are human reasons for this.

No one wants to put a company out of business and leave its workers jobless. But capitalism requires both creation and destruction.

The other side is that lenders must lose their money, too.

Those who make irresponsible lending decisions have to face consequences. Or they will keep doing it, causing further problems.

Unfortunately, we do the opposite. Bailouts and monetary stimulus over the last decade incentivize a lot of unwise lending. And that is not going to end well.

Many (possibly most) of these zombie companies should fail. And they will—either suddenly in a crisis, or in slow motion.

There really are no other options. And when they do, it will hurt not only their lenders but their suppliers, workers, and shareholders.

That, my friends, is how recessions begin. If we’re lucky, it will occur gradually and give us time to adapt. But more likely, it will spark another crisis given high leverage and interconnected markets.

Not long before the last crisis, Ben Bernanke assured us the subprime “problem” was contained. It reminds me of the old Hemingway line, “How does one go bankrupt?” The answer: “Slowly, and then all at once.”