The European Union was a noble dream, but as happens with most dreams, reality eventually sets in.

It is simply not possible to maintain economic unity and a single monetary policy among a collection of states each of which sets its own fiscal policies.

Europe’s sovereign debt crisis was the first sign that something was structurally wrong. Germany spent years loaning euros to poorer eurozone countries, so they could buy German-made goods.

Other exporting nations within the EU did the same. The resulting trade imbalance had to show itself somewhere. It did… in the government debts of countries like Greece, Italy, Spain, Portugal, and Ireland.

Now add the political tensions stemming from the migrant crisis and the risk of Brexit… and Europe’s collapse becomes increasingly real.

Here, I outline the five biggest internal risks the European Union faces right now. How they handle them will make or break the entire union—and possibly the global economy. 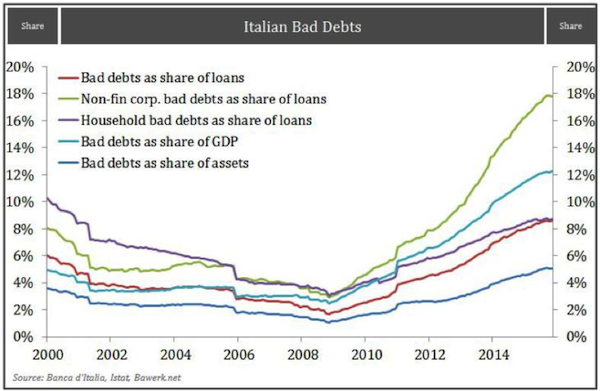 (By contrast, you should be thankful that nonperforming loans of US banks are down to a somewhat manageable 1%. During the worst of our banking crisis, US nonperforming loans never rose above 3½%. Italy’s level is almost six times greater, and there is not an economic crisis yet.)

A collapse of the Italian banking system is a systemic risk for all of Europe. Italy is the eighth-largest economy in the world, only slightly smaller than India. Its economic impact on Europe and thus on the global economy is critical. 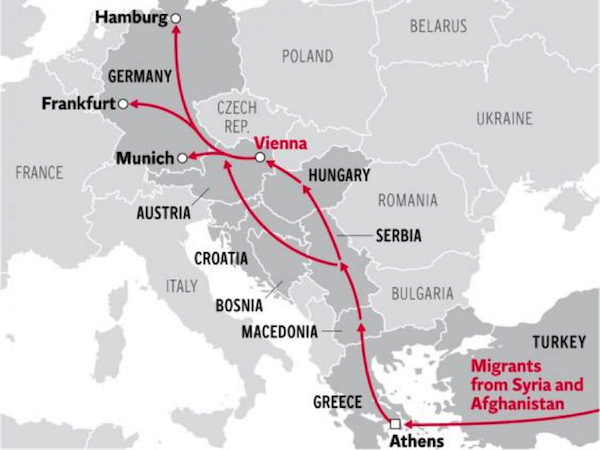 Compared to Italy, Greece will seem quite manageable. Greece remains important for another reason, though. It is the main gate through which fleeing Syrians, Iraqis, and others try to enter Europe.

The wealthier states need Greece’s cooperation to keep the flow of refugees manageable.

Greece is now ground zero for the two greatest challenges to afflict Europe in recent years: the debt crisis and Germany’s insistence on austerity as the only cure, and the backlash against the wave of human migration from war-torn and impoverished countries….

The migrant crisis is already a humanitarian disaster, and the situation is getting worse. The European Union, however, is all but paralyzed. 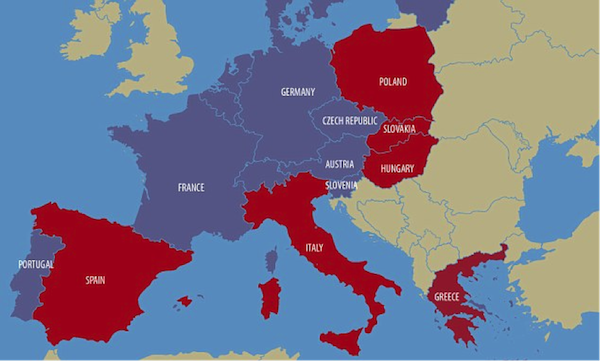 This is the Schengen area, which could be a lot smaller according to EU plans to stem the migrant crisis.  The countries in red could all be kicked out, which would leave only the countries in blue.

The Paris terror attacks in November resulted in the reimposition of border controls through most of the previously open “Schengen” area. The attacks also convinced many Europeans that migrating Muslims are a security threat.

An initial welcome turned into fear. One of the key leaders in Europe, Angelina Merkel of Germany, finds herself under intense political pressure because of an anti-immigrant backlash from voters.

That brings me to the fourth risk.

Desperate for any solution, the EU is now seriously entertaining a deal to accept Turkey as a member in exchange for Turkey’s holding most of the migrants within its borders.

Giving Turkey a path to EU membership is problematic to Cyprus, which is a tiny island but an equally powerful EU member state, with technically the same vote and potential veto that Germany and France have. Cyprus can veto the refugee deal that the rest of Europe so desperately needs to make with Turkey.

The solution, to this point, has been for the large and economically powerful EU/eurozone members to simply force their will on the smaller states, resolving short-term challenges at the cost of long-term unity.

Cyprus has an EU-backed veto on starting accession negotiations over a number of new policy areas, because Turkey doesn’t recognize its passports or allow ships and airplanes from Cyprus into its ports and airports.

Cyprus has legitimate concerns here, but the EU solution is to simply ignore those concerns and plow ahead on other fronts.

That approach will probably work too, but each such episode pulls a few more bricks out of the EU superstructure. Bullying your smaller members is not consistent with the idea of an “ever-closer” union. 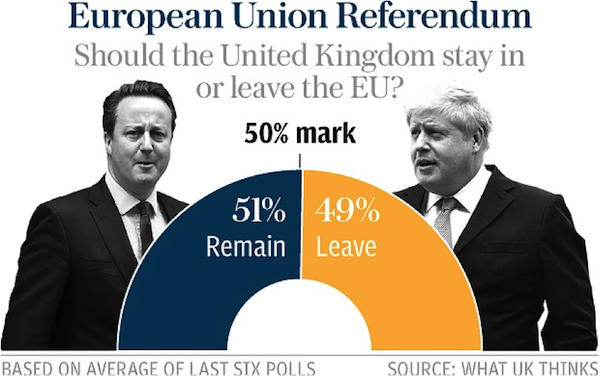 And of course, another looming danger is that the United Kingdom will hold a referendum this summer that may well lead it out of the EU.

A member leaving the EU would set a dangerous precedent. For years following, there would be major consequences for world trade and currency flows.

The Uncertain Future of the European Union

There are two possible outcomes to a European financial crisis stemming from massive sovereign debts and unbalanced budgets. The first is that an entirely new economic structure might evolve in the European Union.

If the EU is to stay together, it is going to have to resolve the sovereign debt issues. Because the European elites really do want to see a united Europe when push comes to shove, they are likely to take on the debt of every eurozone nation according to some odd formula that only a European bureaucrat could love, mutualize that debt, and stick it on the balance sheet of the European Central Bank.

They would then require each country to balance its own budget, much as the various states of the United States must do. It would be a difficult thing to do, but it could be done.

However, mutualization would very likely make the euro weaker, possibly much weaker. And of course, Germany would have to go along with the mutualization of debt. Why would they do this? Because 40% of their GDP derives from exports, half of which are sold to their fellow European Union members.

The second possible outcome is that there will be no agreement on how to deal with the debt, and the European Union currency region will sunder and its various countries go back to managing their own currencies.

Those new currencies would likely be much weaker against the reinstituted German mark, thus pummeling German exports. As a side effect, a significant portion of the European Union’s former member states would then find their currencies 30% to 40% lower against the dollar (and some small countries might see a much more significant drop).

While that scenario would be good for American tourists (think cheap Italian and Greek holidays), it would have catastrophic implications for the global economy.