In the US, we have two national programs to care for the elderly. Social Security provides a small pension, and Medicare covers medical expenses. All workers pay taxes that supposedly fund the benefits we may someday receive.

The problem is that's not actually true. Neither of these programs is comprehensive.

The End of Government Entitlements

Medicare has deductibles and copayments that can add up quickly. Both programs assume people have their own savings and other resources (I wrote about this in detail in my previous issues of Thoughts from the Frontline). Despite this, the programs are crucial to millions of retirees, many of whom work well past 65 just to make ends meet.

This chart from my friend John Burns shows the growing trend among generations to work past age 65: 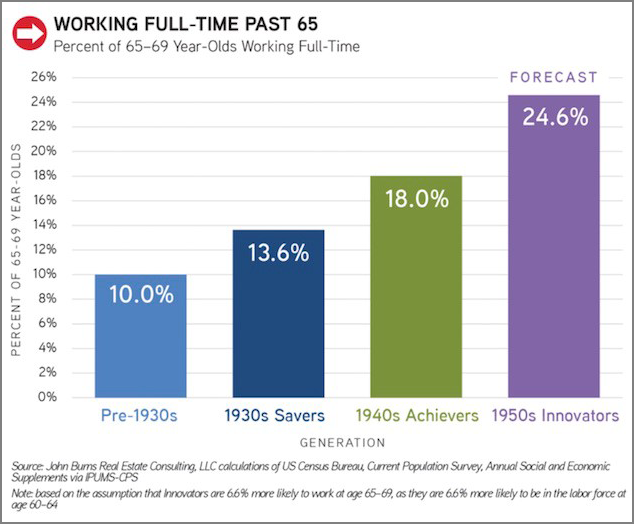 Having turned 68 a few days ago, I guess I’m contributing a bit to the trend

Limited though Social Security and Medicare are, we attribute one huge benefit to them: They’re guaranteed. Uncle Sam will always pay them—he promised. And to his credit, Uncle Sam is trying hard to keep his end of the deal.

In fact, Uncle Sam is running up debt to do so. Actually, a massive amount of debt:

Federal debt as a percentage of GDP has almost doubled since the turn of the century. The big jump occurred during the 2007–2009 recession, but the debt has kept growing since then. That’s a consequence of both higher spending and lower GDP growth.

In theory, Social Security and Medicare don’t count here. Their funding goes into separate trust funds. But in reality, the Treasury borrows from the trust funds, so they simply hold more government debt.

Total GDP is roughly $19.3 trillion, so the federal debt is about equal to one full year of the entire nation’s collective economic output. That total does not also count the $3 trillion-plus of state and local debt, which in almost every other country of the world is included in their national debt numbers.

Including state and local debt in US figures would take our debt-to-GDP above 115%... and rising.

Just wait. We’re only getting started.

$210 Trillion Worth of Unfunded Liabilities

An old statute requires the Treasury to issue an annual financial statement, similar to a corporation’s annual report. The FY 2016 edition is 274 enlightening pages that the government hopes none of us will read.

Among the many tidbits, it contains a table on page 63 that reveals the net present value of the US government’s 75-year future liability for Social Security and Medicare.

That amount exceeds the net present value of the tax revenue designated to pay those benefits by $46.7 trillion. Yes, trillions.

Future Congresses will have to find it somewhere. This is the fabled “unfunded liability” you hear about from deficit hawks. Similar promises exist to military and civil service retirees and assorted smaller groups, too.

Trying to add them up quickly becomes an exercise in absurdity. They are so huge that it’s hard to believe the government will pay them, promises or not.

Pensions Are a Lie

Many Americans think of “their” Social Security like a contract, similar to insurance benefits or personal property. The money that comes out of our paychecks is labeled FICA, which stands for Federal Insurance Contributions Act. We paid in all those years, so it’s just our own money coming back to us.

A 1960 Supreme Court case, Flemming vs. Nestor, ruled that Social Security is not insurance or any other kind of property. The law obligates you to make FICA “contributions.”

It does not obligate the government to give you anything back. FICA is simply a tax, like income tax or any other. The amount you pay in does figure into your benefit amount, but Congress can change that benefit any time it wishes.

Again, to make this clear: Your Social Security benefits are guaranteed under current law, but Congress reserves the right to change the law. They can give you more, or less, or nothing at all, and your only recourse is the ballot box.

Medicare didn’t yet exist in 1960, but I think Flemming vs. Nestor would apply to it, too. None of us have a “right” to healthcare benefits just because we have paid Medicare taxes all our lives. We are at Washington’s mercy.

I’m not suggesting Congress is about to change anything. My point is about promises. As a moral or political matter, it’s true that Washington promised us all these things. As a legal matter, however, no such promise exists. You can’t sue the government to get what you’re owed because it doesn’t “owe” you anything.

This distinction doesn’t matter right now, but I bet it will someday. If we Baby Boomers figure out ways to stay alive longer, and younger generations don’t accelerate the production of new taxpayers, something will have to give.

If you are dependent on Social Security to fund your retirement, recognize that your future is an unfunded liability—a promise that’s not really a promise because it can change at any time.