The US labor shortage is double trouble: The economy lacks enough workers, and the average worker is less productive.

In trying to write about this problem, I kept getting that déjà vu feeling, like I’d said the same thing before. And sure enough, I had… back in 2018.

Four+ years later, that article is still interesting—both for what it says and how it shows these labor issues aren’t new. We were talking about them long before COVID.

Rather than reinvent the wheel, today I’m reproducing that entire 2018 article. I stand by all of it and haven’t changed a word. 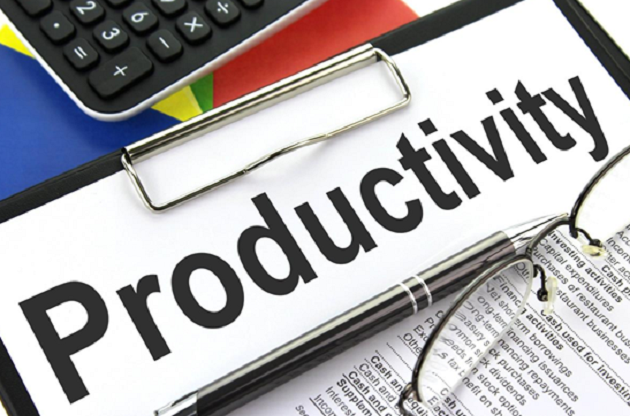 The Productivity Riddle May Be Simple (originally published August 21, 2018)

Finding more and better-trained workers is the top challenge for many US business owners. They say current workers can’t produce enough to meet growth objectives.

Average hours have climbed lately, which helps, yet people can only work so much.

That leaves productivity as the main dial we can turn… but it hasn’t been working as well as it used to.

Since World War II, US worker productivity grew at 2.1% annually. For the year ending June 2018, it rose only 1.3%, according to Labor Department data. It’s been near that level for a decade now.

While this is a problem, solving it may not be as hard as it seems.

Business owners who want to raise productivity have several ways to do it.

They can help workers acquire new skills and work more efficiently. Training can be costly, so many prefer to hire workers who already have the desired skills… or at least claim to.

Another way is to install technology that does the same tasks more efficiently than humans. This might result in layoffs, but the remaining humans will be more productive, on average. However, technology is usually expensive and requires capital investment.

A third option is to entice more output from workers by connecting it to higher pay. Sell more widgets and you’ll get a quarterly bonus. Employers like this because it appears to be cost-free; they only spend more if they get more.

In fact, lots of research shows “contingent motivators” tend to reduce productivity in the cognitive and creative jobs that increasingly drive the US economy. That’s not what businesses want, and it’s the opposite of what the economy needs.

Incentive pay can work in some situations. It depends on the company, the workers, and how the plan rewards them.

Incentive pay doesn’t work if the workers do their part and the incentives don’t appear. They will either quit or return to their old ways once they realize the reward was a mirage.

This may be more common than we think. It shows up in the economic data.

The chart below shows output per hour (blue line) and compensation per hour (red line), both adjusted for inflation. They are indexed so the 1947 level equals 100.

(Click here for a bigger version if the chart looks fuzzy.) 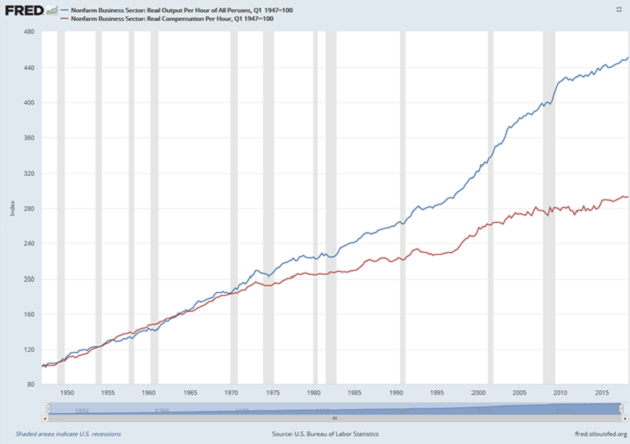 You can see the two lines tracked closely for about 25 years after 1947. In the aggregate, American worker pay rose in proportion to worker productivity. Those were generally good times, at least economically.

Then in the 1970s, something happened. The lines diverged. Worker productivity kept rising and even accelerated in the 1990s. Compensation rose too, but at a slower pace.

What happened? Economists aren’t sure.

Some think declining union membership left workers in weaker bargaining positions. Others point to factory automation. My own favorite is rising foreign competition after the 1971 end of the Bretton Woods monetary system launched a new era in international trade.

Now, this isn’t necessarily because employers failed to reward rising productivity. Maybe other, unrelated factors kept pay from rising as much as it should have.

But the data says that for some reason, across the whole US economy, worker pay hasn’t kept up with worker productivity for some 40 years now. That widening gap explains much of our political and cultural discord. 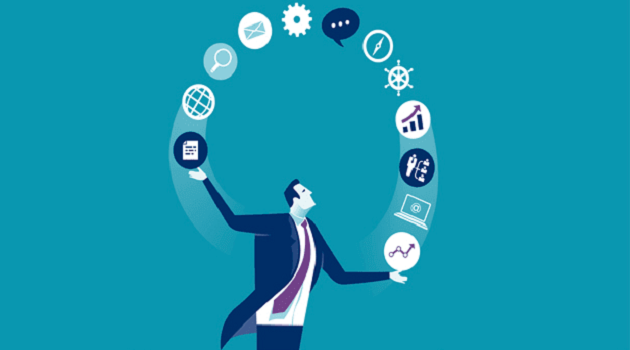 All this adds up to an odd situation.

After decades of becoming more productive and not seeing pay rise alongside it, workers’ productivity stopped growing as fast. It’s hard to unravel cause and effect, but a connection seems likely.

Yet people are still scratching their heads wondering why, and CEOs still complain they can’t find qualified workers.

This is no mystery. The solution isn’t rocket science either.

If businesses want more-skilled workers so they can produce more, then business must teach them those skills. Either spend the cash to do it yourself, or make sure schools have enough funding to provide that training.

Then, when you get that additional productivity, share the fruits of it with workers, proportionate to their increased contributions.

But no. Few businesses invest in training or support the tax increases it would take for schools to do it properly. Complaining while they wait for someone else to perform magic is so much easier. Meanwhile, low productivity holds back the higher growth that would help everyone.

The solution may be right in front of us, if we would only try it.