Let’s review some ancient history… as in six months ago.

The original outline included a federal minimum wage increase to $15 per hour. Biden himself was skeptical it would pass, and he was right. That part didn’t survive negotiations with Congress. The federal minimum remains $7.25.

Yet now, $15 an hour (or close to it) effectively is the minimum wage for most occupations in the United States. The labor movement’s long-running “Fight for 15” succeeded, without Congress ever voting.

The increase happened even faster than Biden wanted, too. His plan would have raised the minimum wage in steps over several years. Instead it went all the way within months.

Could wages drop again? Sure. But it would require significant change in the labor supply-demand balance, which seems unlikely.

Aside from the population trends I’ve described, wages are (using economics lingo) “sticky.” That means they don’t change easily. And wages are specifically “sticky-down,” unlikely to fall back once they rise to a higher level.

We have been in a multi-decade period when wages rose slowly for most workers. And even now, adjusted for inflation and hours worked, earnings are roughly where they were in the 1970s. You can see it in this chart. 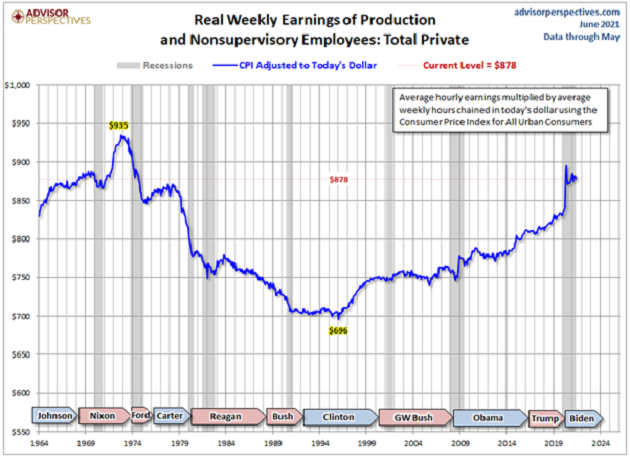 Real weekly earnings for nonsupervisory workers rose about 12% in the 20 years from 2000–2020. (Note this data is adjusted by the Consumer Price Index, which understates inflation for many people. So the 12% may overstate reality.)

In that same period, executive pay climbed a lot more than 12%. So did profits. S&P 500 earnings per share more than doubled. Workers noticed.

Now look what happened when COVID-19 struck. Average pay actually jumped as more low-wage workers lost their jobs. For a few months, the labor force had a much heavier concentration of better-paid professionals, confusing the data.

But as the economy stabilized and those service industry jobs returned, wages didn’t drop back. They seem to have found a new, higher normal.

This could still change, but wages aren’t the only sticky number here.

Economically, wages are just another price: the price of labor. Like all prices, they emerge from the combination of supply and demand.

The official data calls the worker supply the “Civilian Labor Force.” That’s basically the number of adults who aren’t in the military and either have some kind of job, or are looking for one.

The labor force had been growing steadily when the pandemic began, then fell off a cliff. It bounced quickly, but not all the way. 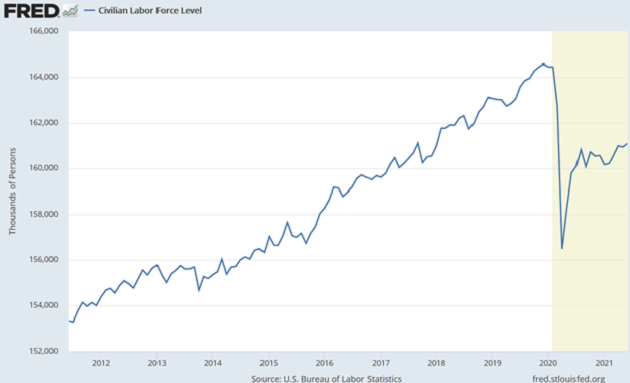 Similar to wages, the labor force seems to have settled at a new normal. It’s been remarkably stable since that initial adjustment, running about 3.5 million below the December 2019 level.

Some argue these people are relaxing on unemployment benefits. But if so, they would at least claim to be job hunting, which would include them in the labor force. These missing workers aren’t even pretending. They’re not employed and, when asked, say they don’t want to be employed.

And there are a lot of them. The “Participation Rate” is the percentage of all adults who are in the labor force—excluding retirees, full-time students, non-working spouses, etc. This, too, was slowly climbing until the pandemic. 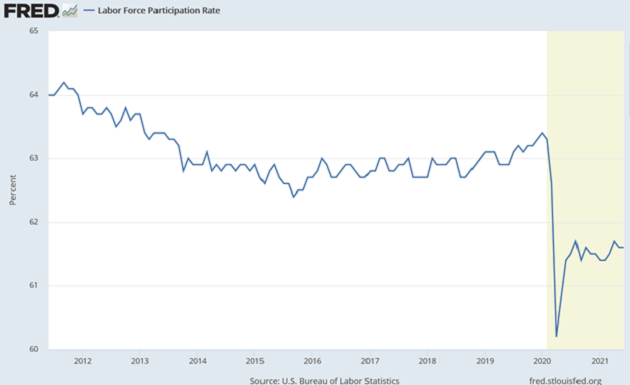 Let’s look closer. March-May 2020 were obviously outliers, so ignore them for a minute.

That difference may look small, but across the economy it roughly matches the 3.5 million shrinkage in the labor force.

Other things being equal, you would expect such a supply contraction to raise wages. And it seems to be doing so.

So it looks like several million people who were in the labor force as of early 2020 are now out of it. Why?

They all have their own reasons, of course. The pandemic made us all rethink our life plans.

The question now is how quickly the labor force can bounce back. The data shows it happening slowly, if at all.

Employers are hoping the shortage will ease this fall as schools reopen and enhanced unemployment benefits expire. But even if that happens, they’ll remain a long way from hiring like it’s 2019 again.

To compete for workers, businesses will have to keep higher wages in place for a long time, probably years. And the longer wages stay up, the stickier they will be. This looks increasingly like a major long-term change.

Labor had a rough few decades. Now, slowly but surely, the tables are turning. A different kind of economy is coming.