Microsoft (MSFT) has been on a tear over the past year…

Shares of the software pioneer have jumped 70% since last February—triple the S&P 500’s gain, as you can see: 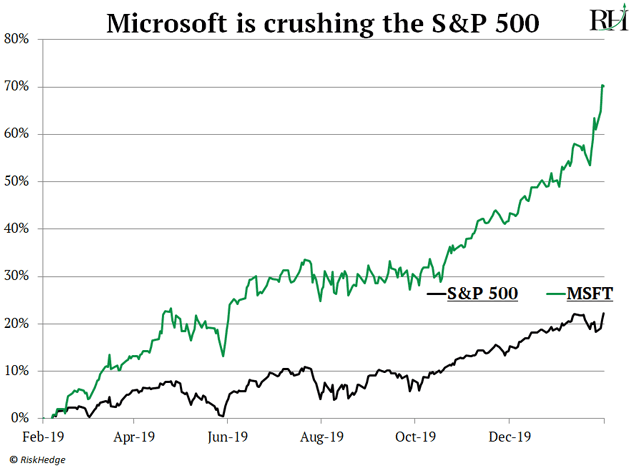 Keep in mind, Microsoft is the furthest thing from a volatile penny stock. It’s a $1.39 trillion company—the second biggest stock in the world.

And its impressive run shouldn’t surprise you. Microsoft has posted incredible returns for years now. Over the past decade, its stock has handed investors 600% gains and counting: 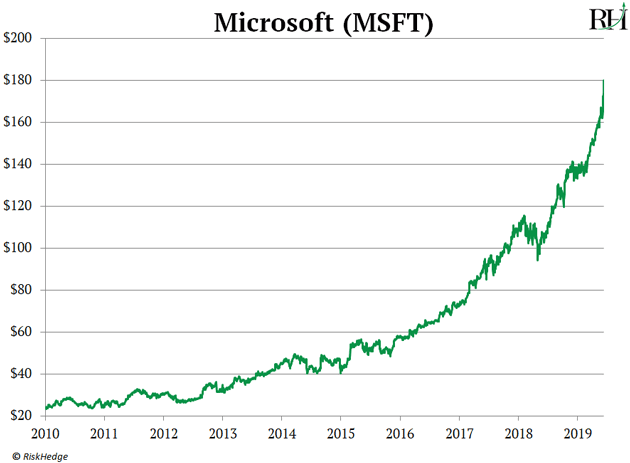 On Tuesday, my colleague Justin Spittler—editor of IPO Insider—explained how Microsoft made it onto the “Mount Rushmore” of stocks. It created one of the best-selling products ever: Microsoft Windows.

Windows, as you likely know, is the operating system that made computers useful to the average person. An operating system is like the “brain” of your computer. It “talks” to the keyboard, monitor, mouse, etc.—and tells them what to do.

Justin says world-class operating systems is the key trait behind many of the world’s most dominant tech companies.

But there’s another characteristic I look for, too.

Microsoft transformed itself by becoming an “autopilot stock.”

In the 2000s, it missed every big disruption like mobile phones… internet search… and social networks.

As smartphones were shipping by the billions, Microsoft was still focused on clunky old PCs.

Back then, everyone believed Microsoft was a tired old business. Investors wanted nothing to do with it. 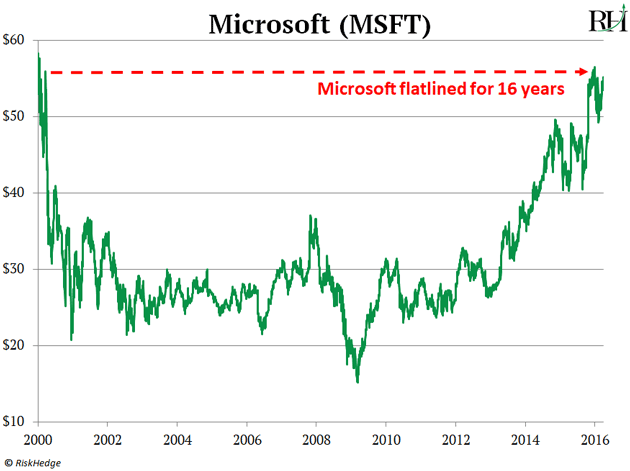 As I mentioned, Microsoft dominated the ‘90s with its revolutionary Windows operating system. It cemented its dominance by creating Word docs… Excel spreadsheets… and PowerPoint presentations.

But then it needed to adapt…

Do you remember when its Office software came in shrink-wrapped CD boxes?

But in 2014, it switched things up. It began selling subscriptions to its software over the internet.

Instead of paying a one-time $350 fee for the physical CD… you could access Office for $99/year through the web.

And get this… 450 of America’s 500 largest companies pay Microsoft millions of dollars each month for its software, too.

Switching from charging one-off fees to subscriptions injected a lightning bolt of growth into Microsoft. Its stock shot up almost 300% since, as you can see: 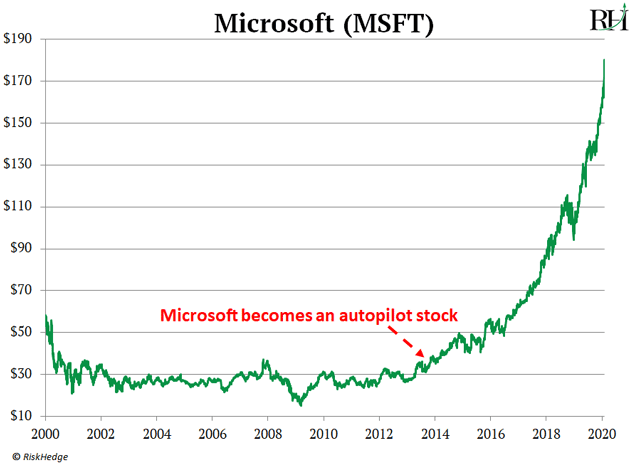 In the past, it had to persuade customers to rush out and buy new physical CDs every few years. Now it charges them $99/year or $9.99/month automatically… unless they cancel their subscription.

This is an incredible financial advantage. No other business model can match the predictable cash flows that a subscription business generates.

I call these autopilot stocks—because they rake in cash month after month… as if on autopilot. Think about it… 225 million people let Microsoft take $99 directly from their bank accounts every year.

Its “PDF” software was a driving force behind the whole “going paperless” trend that swept through offices.

But then it stopped selling CDs and asked customers for $30/month to access its software on the internet. Since going on autopilot, Adobe has handed investors 1,000% profits. 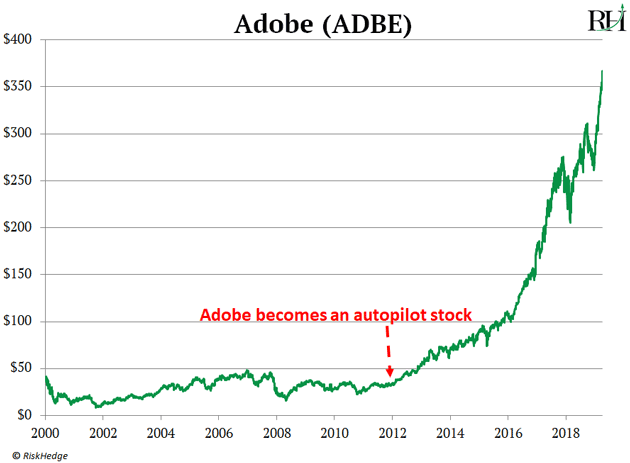 And here’s the thing… Adobe didn’t have to create a new breakthrough product to achieve these returns. The 10X stock gains didn’t come from an incredible invention.

Adobe simply changed the way it sells software. It became an autopilot stock.

Longtime RiskHedge readers will remember I highlighted Autodesk back in 2018.

Autodesk is at the bleeding edge of one of my top disruptive trends for the 2020s: 3D printing.

You may remember the craze around 3D printing a few years ago. Early 3D printers were a huge disappointment. They could make only flimsy plastic trinkets that had little use. But the technology has improved 100-fold since then.

Autodesk makes the software that companies use to design and then print parts.

Like Microsoft and Adobe before it, Autodesk knew it had to become an autopilot stock.

Autodesk used to charge companies a big up-front lump sum to access its software. The problem was folks would buy it once and use the outdated version for years. And Autodesk’s sales flatlined between 2009–2017.

But in 2017, it switched to selling its software as a yearly subscription. Shifting to autopilot mode has rejuvenated Autodesk’s business, as you can see: 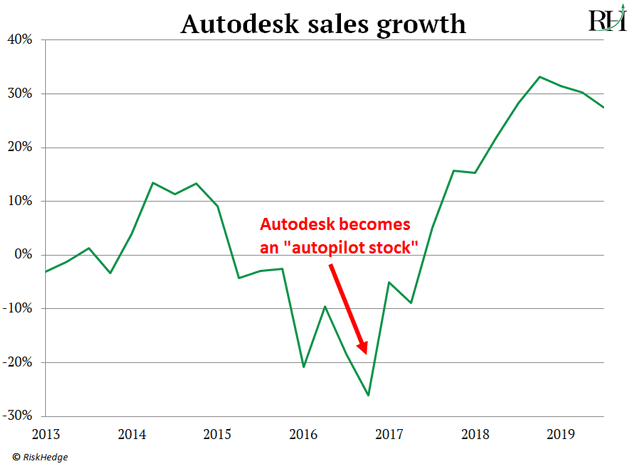 Autodesk has 4.3 million customers paying it thousands of dollars in fees each year. Last quarter, it raked in $2.9 billion in subscriptions… a 49% year-over-year jump.

The stock has jumped over 50% since I first highlighted it in late 2018. And it just hit another all-time high. If you bought it after reading my letter, nice call.

Autodesk isn’t the bargain it was back then… But I still expect this autopilot stock to jump higher over the coming years as it dominates the 3D printing software market.

Do you own any autopilot stocks? How have they performed? Let me know at Stephen@riskhedge.com.