Transportation is a big issue in most of the US.

It’s so big that for the majority of Americans having a car is a matter of survival. Most people can’t even go to work without a car.

That makes auto payments a high priority. And yet, the number of people who can’t make them is rising fast.

In fact, 7 million Americans are at least 90 days late on their auto payment: 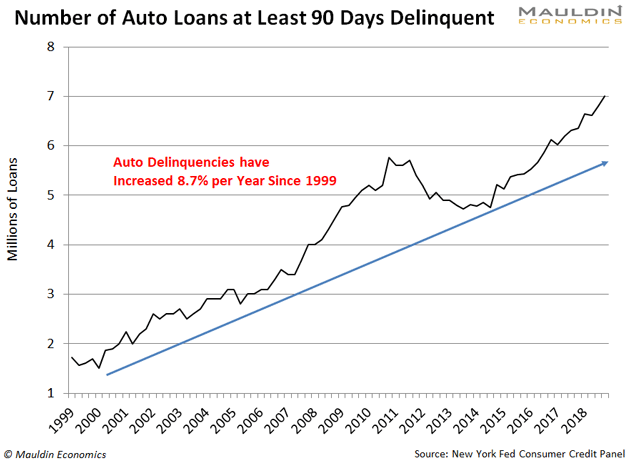 That’s the highest level in history.

While most analysts view this as a threat to the auto industry, I see it as a symptom of a bigger problem that should set off alarm bells nationwide.

Rising Auto Delinquency Is a Canary in the Coal Mine

Notice what I said earlier: auto loans are a high priority payment. Everyone is well aware that their well-being depends on these payments.

People didn’t forget to pay on time. Nor did they put those payments off for any trivial reason. They didn’t pay because they don’t have enough money.

Let me put it another way…

The number of Americans who don’t have enough money for even high priority payments is rising fast.

That’s not a sign of a healthy economy. Instead, it’s a sign that we’re not too far from a recession.

All Signs Are Pointing to a Looming Recession

I’m not alone in this thinking.

The Fed doubled the odds of a recession in the past year alone. In fact, their recession probability reading has not been that high since 2008: 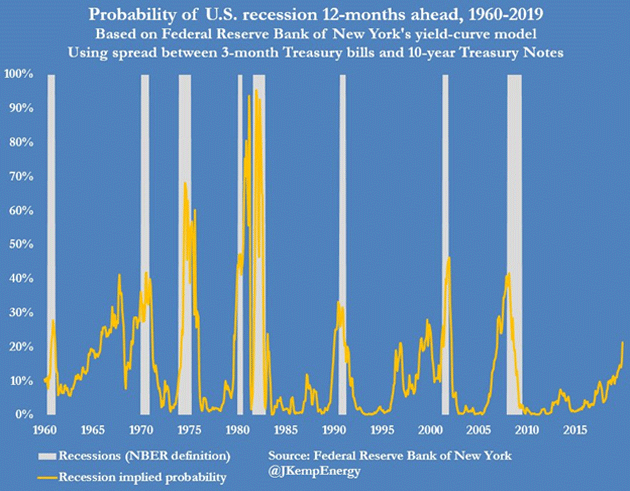 When the Fed is worried, you take notice. The last time they were so pessimistic about our economy we faced the 2008 financial crisis.

Another key piece of data signaling the end of this economic cycle is consumer spending.

Consumer spending is the main driver of economic growth. And it’s starting to falter.

The chart below shows the difference between current and future expectations in consumer spending. The higher the reading, the lower spending is expected to be in the future.

Today the ratio is peaking at levels not seen since the dot-com crash in 2001: 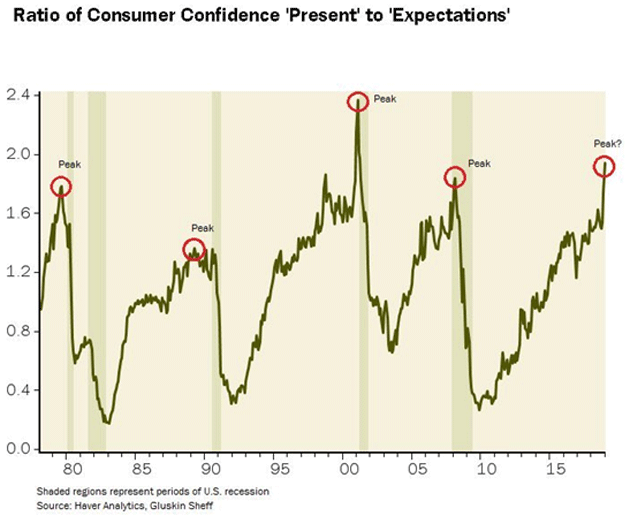 This means that the consumer is tapped out. Even the “bond king” Jeffrey Gundlach said this was, “one of the worst readings ever.”

Another key gauge of consumer spending is retail sales. No positive news here either.

Last month, retail sales fell at the fastest pace since 2009.

The bad news is mounting up. It’s a clear sign the economy is at the tail end of the cycle. Now it’s only a matter of time before a recession hits.

Dividend-Paying Stocks Come to the Rescue

Most economic recessions cause bear markets in equities. And in a bear market, you want to do one of three things:

If you go to cash, you’re not making any money. You’re actually losing money to inflation. With bonds, you’re earning a paltry 2–3% return on your investment.

That’s why I prefer dividend-paying stocks.

See, my forte is income investing. This means buying stable, reliable companies that will deliver solid results no matter what’s happening in the economy. And I’ve done it for most of my life.

Dividend-paying stocks have a long history of riding out financial storms.

Even a simple strategy like buying the 10 stocks with the highest dividend yields from the Dow Jones Industrial Average (DJIA) beats the market over the long run.

But had you held the 10 DJIA stocks with the highest dividend yields instead, you would have earned 407%! This period included the dot-com crash.

But this isn’t cherry-picked data. This same strategy worked in 2018.

While the DJIA lost 6% of its value, the 10 stocks with the highest dividend yields lost a mere 1.5%.

But the good long-term performance is not the only reason to own dividend stocks in a volatile market.

Dividend-paying stocks have proven to outperform in both bull and bear markets. There’s good reason for this.

Because dividends make up for some of the losses, dividend stock prices tend to fall less during bear markets.

Another reason these stocks are more stable is that they are often very solid businesses. They are much more immune to economic weakness than other stocks.

That’s why they have money to pay dividends in the first place.

Remember back in October 2018 when the stock market was a roller coaster?

Well, had you held dividend stocks in this period, the ride would have been much smoother: 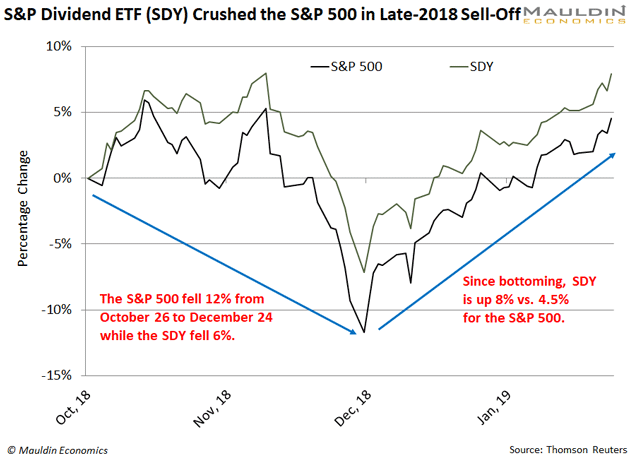 As you can see, the S&P Dividend ETF (SDY)—which holds a basket of dividend-paying stocks—fell much less than the S&P 500. It also bounced back even faster.

Clearly, dividend stocks are what you want to hold in volatile times. But picking the right dividend-paying stocks is crucial.

That’s where I come in.

Americans missing their car payments is one of the red flags popping up. And it won’t go away without a major reset in the markets.

Bulletproof your portfolio with dividend stocks before it’s too late. If you want a good place to start, download  my free special report here.