This disconnect between professional and individual investors is clear when looking at ETF flows. Since 2008, $2.8 trillion has flowed into ETFs. 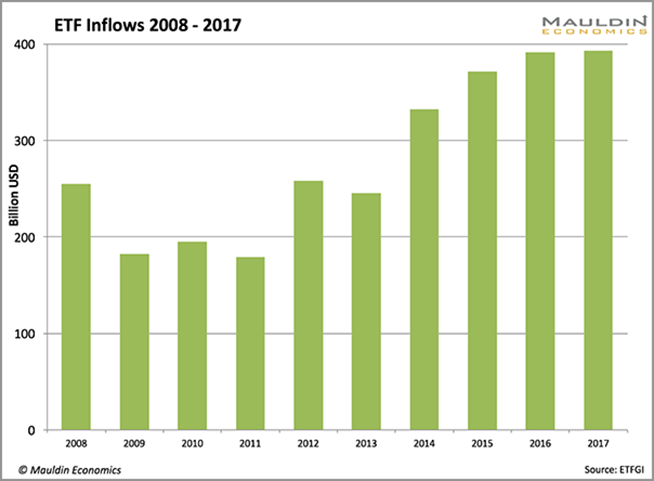 However, most of these funds have gone into just a handful of ETFs. FactSet found that in August, 51.3% of inflows went to just 10 of the 1,800 ETFs available in the US.

While SPY continues to benefit from ETFs’ rise in popularity, it has fallen out of favor with big-name investors.

Combing through the latest SEC filings of some of the world’s top money managers, an interesting trend emerged.

One of the most sold stocks by investors managing over $100 million was… you guessed it, SPY.

In total, 652 funds dumped the stock, with some big names including UBS, Wells Fargo, and Allianz Asset Management exiting their positions.

However, it’s not just SPY, or the S&P 500, top money managers are dumping.

The latest Global Fund Managers survey from BoAML confirms that professional money managers are turning against US stocks. In September, fund managers were the most bearish they have been on US stocks since November 2007.

Although top investors are dumping broad US stocks and ETFs, they’re pouring billions into others. Here’s the three most popular ETF’s among professional investors in 2017.

The Vanguard FTSE Emerging Markets ETF (VWO) is up 27% year to date. That’s more than double the 12.5% return of the SPY.

Bridgewater Associates, the world’s largest hedge fund recently increased its holdings of VWO. The ETF now makes up 30% of its portfolio.

But Ray Dalio’s firm isn’t just bullish on VWO—it’s bullish on emerging markets (EM). Together, VWO and the Shares MSCI Emerging Markets Index (EEM) make up 51% of its total holdings.

UBS and Credit Suisse are also positive on EM stocks, citing attractive valuations and rising earnings as the reasons.

A weak US dollar is another positive for EM. This chart shows the strong negative correlation between EEM and the US Dollar. 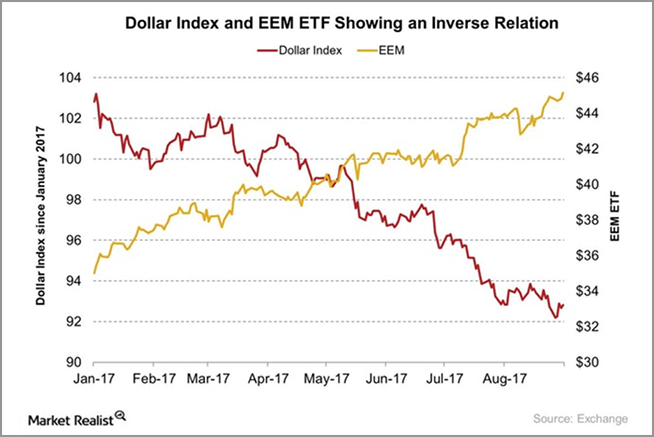 While professional investors are turning away from broad US ETFs, they’re still putting money into specific sectors and stocks.

As a group, healthcare stocks are up 21% year to date, making them the second-best performing S&P 500 sector.

So, why are investors bullish on healthcare stocks after years of underperformance?

One reason is the length of this bull market.

Fidelity Investments found that health care has consistently outperformed in late-stage expansions. Given that we are in the ninth year of this expansion, it certainly can be considered “late stage.”

Besides top-down factors, the sector also has superior earnings-per-share growth—a driver of long-term equity returns. Strong fundamentals are likely one of the reasons the Health Care SPDR ETF (XLV) is beating the SPY by a wide margin in 2017. 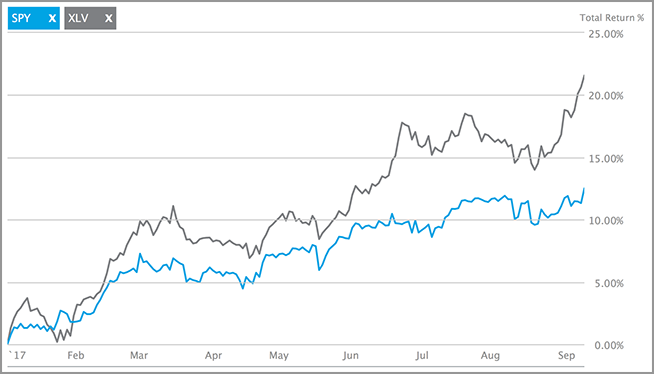 Although the focus here is ETFs, we noticed one specific healthcare stock has attracted a lot of attention from top money managers.

The Vanguard FTSE Europe ETF (VGK) has more than doubled the performance of SPY year to date. 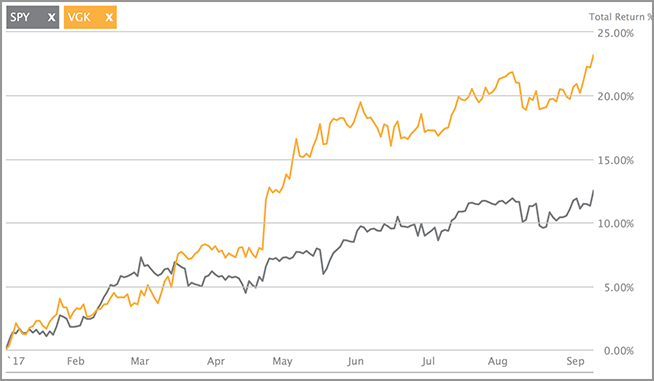 Jared Dillian, former head of ETF trading at Lehman Brothers, has been bullish on European stocks since December 2016 when they were still out-of-favor with most investors.

Why did Jared turn bullish on Europe? Simple. Europe is relatively undervalued to other asset classes where he sees bubbles forming. If you want to see what Jared has to say about these bubbles, I’d highly recommend that get your free copy of his latest special report, Investing in the Age of the Everything Bubble.

While investors’ fondness for European stocks is an old story by now, VGK is still attracting huge inflows. In Q2 2017, Morgan Stanley and JPMorgan poured over $1.5 billion into the largest European ETF.

And being bullish on Europe is the consensus among fund managers. 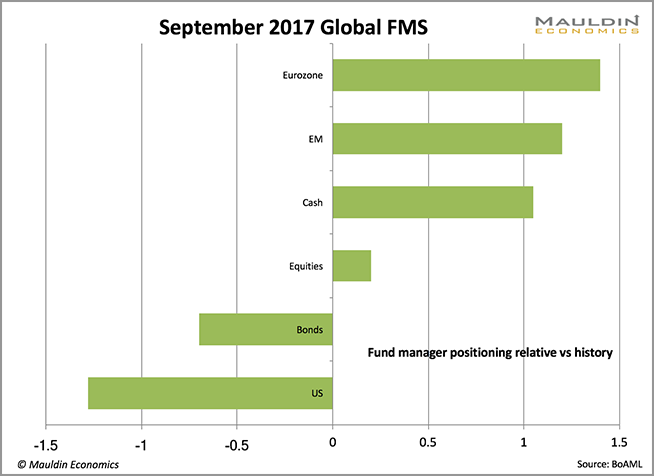 One of the most commonly cited reasons for this optimism was the valuation gap between European and US stocks. Despite 35 months of consecutive inflows, Europe’s stocks are still undervalued relative to their US counterparts. 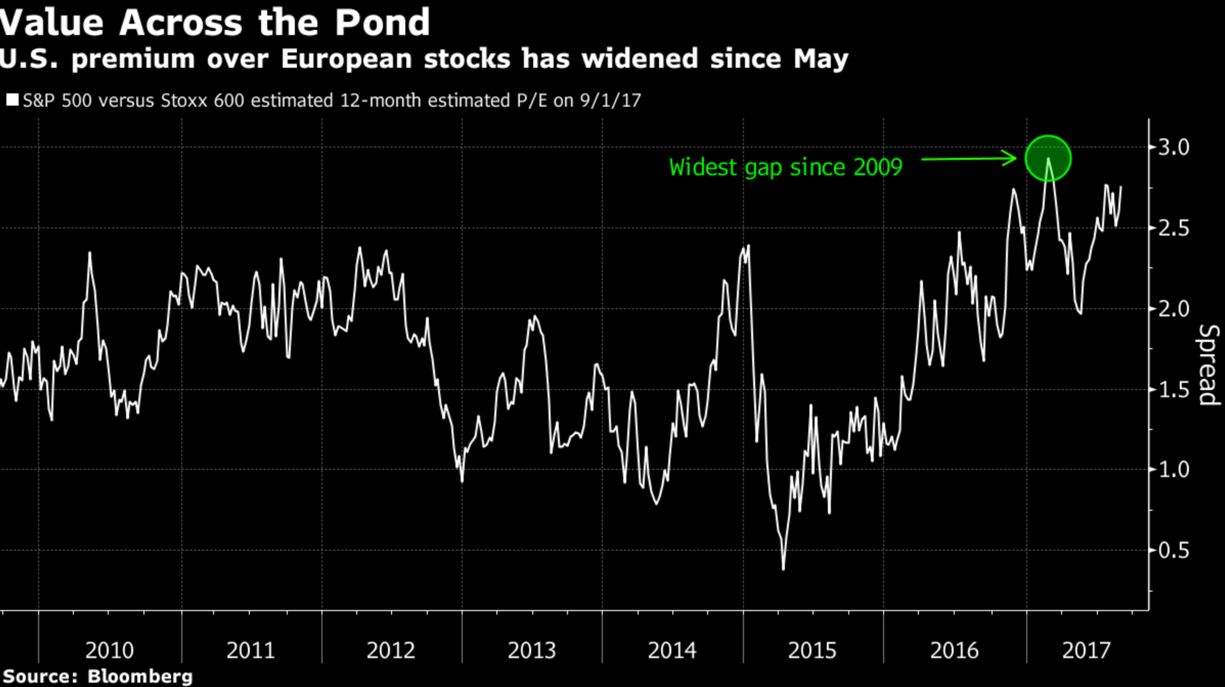 Grab Jared Dillian’s Exclusive Special Report, Investing in the Age of the Everything Bubble

Now, he’s staking his reputation on a call that a downturn is coming. And soon.

In this special report, you will learn how to properly position your portfolio for the coming bloodbath. Claim your FREE copy now.