Meanwhile, out here in the real world, most working-age Americans don’t want to talk or even think about retirement. Often this is because they know they aren't saving enough and probably will have to work until they drop dead.

Retirement Shortfall Among All Income Levels 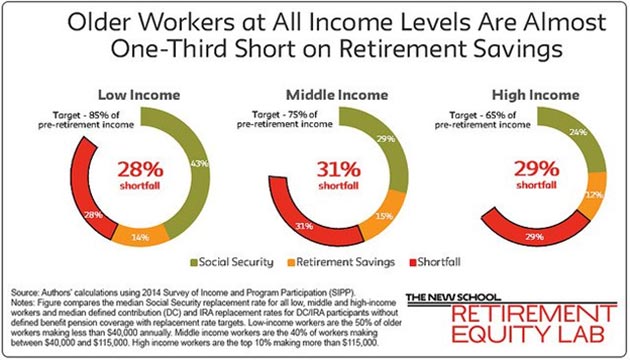 The green part of the circles is what Social Security provides. The program was never meant to be a full pension, and it clearly isn’t delivering one.

Yet a majority of the age 65+ population depends on Social Security for at least half of its income. 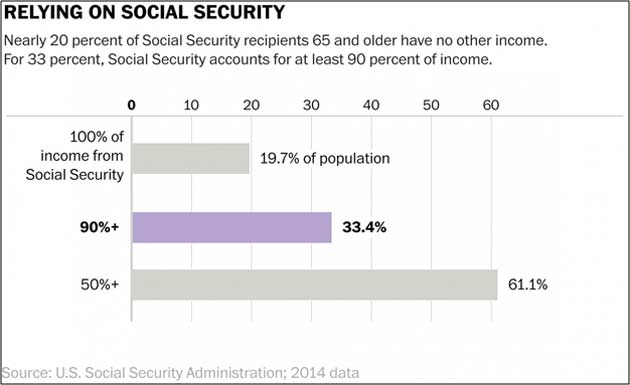 “I’m Going to Work Until I Die.” Yes, You Most Likely Will, So Embrace It

I know many people over 65 who are very happily employed. John Mauldin, for one.

He’s 68 and keeps a schedule that would exhaust much younger folks. Working past retirement age isn’t always a nightmare—though it can definitely be one if you are forced into it.

This problem currently affects 76 million Baby Boomers who have already entered or are about to enter their retirement years. At 53, I’m one of them.

1. Save and invest as much as you can, even if the amount seems small. It will still come in handy. (In my recent exclusive special report, I describe one fixed income asset class that can yield up to 6-8% returns with moderate risks.  Download it here for free).

Meanwhile, those extra working years will let me save longer and my savings to compound, which will leave me in a better position when I can’t work anymore and have to tap my savings.

Medical breakthroughs extend what my colleague Patrick Cox calls "health spans." Not only can we live longer, we can be healthier longer. There’s a good chance 80 will be the new 60.