Any discussion of Islamist terrorism in Europe and the refugee crisis has to be placed in a broader historical context. One way to approach this is to think about the Mediterranean Sea, which was central to the Roman Empire.

The Romans occupied both shores of the Mediterranean and created a single integrated political and economic system around it. As the Roman Empire declined, the system fractured. The general outcome was that Christianity was prevalent on the northern shore of the Mediterranean, and Islam became dominant on the southern shore.

Over time, both extended beyond the Mediterranean basin. Christianity extended to the east (into Russia) and north of the Alps (into Germany, Britain, and Scandinavia). Islam extended south (deeper into Africa) and east (into the Indian Ocean basin and the South China Sea).

But the Mediterranean remained the center of gravity and the flash point of their relationship, as it is today. 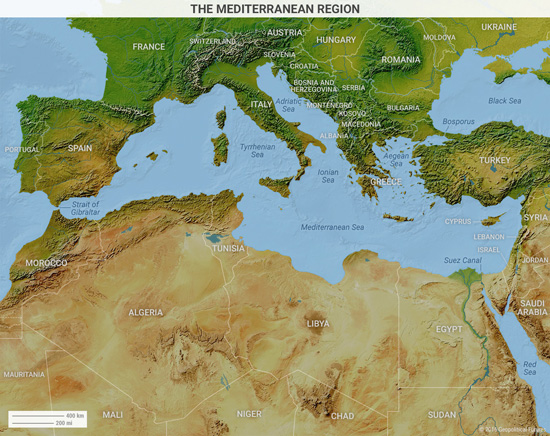 The Early Years of Christianity and Islam

The fourth century was a critical time for Christianity. Constantine converted to Christianity and declared Byzantium (today’s Istanbul) the new Rome. His ascent was bloody, and he used Christianity to hold together the remnants of the Roman Empire. One reason that he chose Byzantium as his seat was to try to control the northern and southern shores of the Mediterranean under one set of beliefs.

From the beginning, Christianity was both a religion and a political force, though never united into a single entity. It was divided into regional churches with different doctrines. The primordial split was between the Roman church and the Orthodox churches of the east.

Muhammed founded Islam about 300 years later on the Arabian Peninsula. Islam was a political religion as well, uniting the faithful and the empire. Islam surged eastward into Persia and westward into the southern shore of the Mediterranean, where it supplanted most of the fragmented Christian regions.

Then a few centuries after Muhammed’s death, Islam fragmented into the Shiite regions of Persia and the Euphrates valley, and the Sunni regions in the west, the southern Mediterranean in particular.

Conquering Lands across the Sea

One of the most important sea lanes in the Mediterranean connected Tunisia and Sicily. The main land routes were along the eastern Mediterranean (through today’s Israel and Lebanon) into Christian Turkey. Another route was in the west, across the narrow Strait of Gibraltar (from today’s Morocco to the Iberian Peninsula).

By the early 700s, Muslims crossed into Spain. They began a conquest that was not ended by the Christians until the 1400s. The Muslims, having consolidated their control of Spain, pressed across the Pyrenees Mountains and moved toward the English Channel. Running on extended supply lines, they were defeated by forces under Charles Martel, grandfather of Charlemagne.

That defeat put Islam on the defensive, fighting to hold Iberia. The advantage shifted to the Christians. Beginning in the 11th century, the Europeans launched a series of wars designed to force the Muslims back to the southeast. After the Crusades failed to hold the land bridge from Turkey to Egypt, the initiative shifted to the Muslims.

The Ottomans attacked and seized Constantinople in the 15th century. They proceeded to push northwest into Europe through a combination of direct combat and alliances with Christians at war with other Christians. They pushed west into the Mediterranean in collaboration with Venice.

The Ottomans and allies controlled the Balkans, seized Budapest, and drove west to Vienna, where they were defeated. Still, they controlled parts of the Balkans until after World War I, and the Muslim populations of Bosnia and Albania are remnants of their presence.

Wars Continue in the Modern Era

In the 19th century, the initiative swung back to the Europeans with attacks on North Africa. The French seized Algeria in 1827 and Tunisia in 1881. The British dominated Egypt in 1882 and then built the Suez Canal.

After World War I and the collapse of the Ottoman Empire, Britain directly or indirectly dominated the Arabian Peninsula, Iraq, and Palestine. The French held Lebanon and Syria. Most important, the Europeans collectively dominated the entire Mediterranean Basin—for the first time returning to the geopolitics of ancient Rome.

When France and Italy were defeated and the British deeply weakened in World War II, the Europeans lost control of North Africa. They no longer had the power to control the region.

After the United States blocked a British-French-Israeli attempt to keep control of the Suez Canal in 1956, the Europeans ceased to be a factor in the southern Mediterranean Basin. But even without the Suez affair, the French and British were finished. The United States’ only real interest was in blocking the Soviet Union and taking over the British concern for Arabian oil.

The British defeat of the Ottoman Empire in World War I fragmented the heart of the Muslim World. That fragmentation gave way to massive disorder after the European mutual destruction in World War II.

Since then, the initiative has been shifting back to the Muslims. At first, they continued to behave as if Europe still dominated them. Then, they became caught up in the Cold War, manipulating the Americans and Soviets.

After the collapse of the Soviet Union, the underlying realities of the Islamic world began to re-emerge, just as the realities of southeastern Europe had re-emerged when the Ottomans weakened.

The Muslim world is still chaotic. Minimal American and Russian forces are struggling to maintain some sort of order in the eastern Mediterranean. However, the forces are trivial compared to the enormity of the situation.

This is one of the periodic shifts that take place between Islam and Christianity—between North Africa and the eastern Mediterranean on one side and Europe on the other. And for nearly 500 years, the Muslim advantage has been their control of Istanbul.

We are seeing a massive population movement triggered by the chaos in the Muslim world. The unrest comes from the collapse of European power in the region. It also stems from the conflict inherent in reconstructing regional political structures and dealing with internal battles.

The current turmoil is no different than the chaos in the Balkans that continued long after the Ottomans left. Such matters can take many decades or even centuries to sort out.

The terrorist attacks in Europe are also part of this process. Various strands of Islam are battling, and the battle will spill over into Europe, as it has for over a thousand years. Just as European quarrels have spilled over into North Africa.

European unity was perhaps greatest when the Turks were at the gates of Vienna and southeastern Europe was under their heel. North Africa was most stable when the Europeans dominated it.

But the Europeans lack the strength and will to dominate North Africa, and the Muslims are capable of only pinprick attacks, called terrorism. The Ottoman occupation of Europe lasted four centuries, as did the Christian Crusades. The Mediterranean basin is not a place where things are settled quickly.

There is talk of a long war, lasting decades. This is a long war that has lasted 1,300 years. But it has not been simply war. There’s been economic cooperation, cross-religious political alliances, and enough complex corruption to fill many books.

It is an intimate relationship, bound together by the Mediterranean Sea. It is also a bad relationship, with both sides seeing themselves as the victim.

It is important to bear in mind the similarities between the two sides of the Mediterranean. Both Christianity and Islam are political religions, combining internal conflict with foreign adventures. Both are committed to their own beliefs and the falsehood of others.

Yet the two sides of the Mediterranean traded, made alliances across religious lines, and fought each other bitterly. Each feared the other. For Muslims, the memories of the Crusades still generate fear. For the Christians, there is a prayer going back to the Ottoman era and a visit by a comet: “Lord Save us from the Devil, the Turk and the Comet.”

Obviously, what I’ve laid out is an oversimplification of history, but it’s intended to show the interconnections. I am not making the case that understanding the other side will lead to peace.

On the contrary, I am reminding readers of the constancy of the conflict between Christianity and Islam. And in any conflict, understanding both yourself and the other is the key to survival.

This is one of the oldest wars still active in the world—the war between the northern and southern shores of the Mediterranean. It was old when Hannibal left Carthage to go north and overthrow the Romans, and the Romans came back to destroy Carthage.

Nothing about this is new, and both sides have given as good as they got. But we are in a period when the initiative is shifting—this time away from Europe to the Muslim world. Europe has lost its grip on North Africa and the Levant, and the first population movements and small attacks are occurring. It will not stay this way.