The global system has reached a breaking point. All the pressures that have built up over the months and years have finally begun to tear it apart. There is much to tell, but for today, I will mention only three countries: China, Saudi Arabia, and Germany.

From 1991 to 2008, the consensus was that more exports make an economy stronger. This was true until 2008. However, the exporter is only as strong as his customer’s appetite and ability to buy what he sells. When demand falls, what was once a strength becomes a weakness.

The financial crisis of 2008, followed by the recessions in Europe and the United States, was the first step in this shift.

Weakening demand hurt China’s ability to export enough to sustain its economy, which had been built on massive inflows of cash. That ate away at China’s economy for years, as the Euro-American appetite for Chinese goods never quite returned and new competitors emerged that undercut Chinese prices.

China’s growth rate declined, and with it, its consumption of industrial minerals.

Mineral producers lived in a fantasy world for a while. They didn’t accept the fact that 2008 had diminished the appetite for Chinese industrial products. The illusion kept commodity prices high until it could no longer be denied that China’s industrial output would not require the same fantastic amounts of minerals.

This fantasy had also held high both prices and hopes in the oil markets. As reality set in, however, world oil supplies increased, and the price of oil and industrial minerals collapsed. 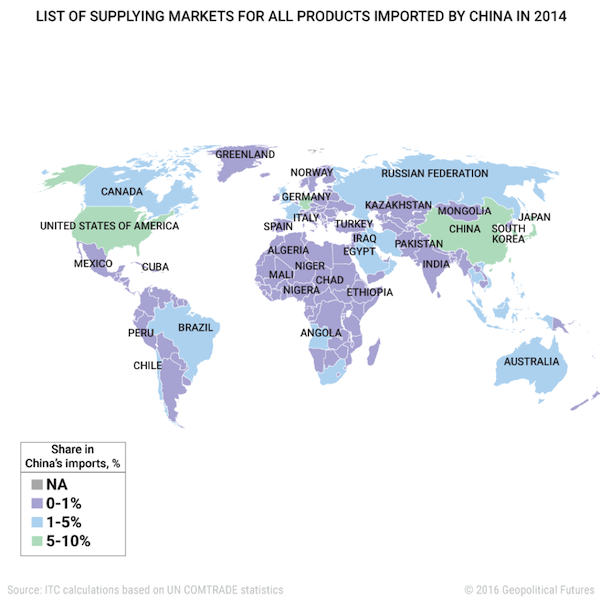 All exporters and raw material producers—especially those who sell to Europe and the United States— faced a long-term degeneration in their positions. While contracting exports hasn’t yet destroyed them, it has impacted the way they operate and compelled them to face their mortality.

As is the case with grave illness, there is a day when you face the reality. For China, that was the day when the People’s Bank of China announced that their foreign reserves declined for the first time in 22 years.

China, however, recently announced that this is no longer the case. It has not been the case for some time, but the tests finally came back; the disease is no longer deniable. Fortunately, China still has $3.31 trillion in reserves as of Dec. 31, although a trillion dollars is not what it used to be.

It means that China must go on a diet, and the question is now political: who will be forced to consume less, who will get to consume more? The panic in the Chinese markets and the massive capital flight that has taken place for several years were the response to and the anticipation of this crisis.

The Chinese purges of corrupt officials are the first course of treatment.

Saudi Arabia is shifting away from its oil-based economy model

Saudi Arabia recently announced that it is considering launching an IPO for Saudi Aramco, the Saudis’ most valuable asset that has defined their economic model and geopolitical status.

Saudi Aramco was fully nationalized in 1980 by a Saudi government swimming in petrodollars due to massive hikes in oil prices. The powerful position of OPEC and the lack of alternatives available to oil importers at that time put the Saudis in a good position and let them have a strict control over oil prices.

Nationalizing Saudi Aramco was a triumph for Saudi Arabia in two ways. First, it put the Saudis in the leading position in the Arab world (pushing aside the secular, socialist Nasserites). Second, Saudi Arabia became the sole owner of its own key resources—for the first time since the Ottomans. Europeans and Americans no longer owned them.

Announcing that the centerpiece of the Saudi system may be put up for sale—besides being shocking—reveals two things. First, the Saudis need money. The kingdom is built on lavish spending. With low oil prices, they must find another way to raise enough money to continue.

Second, the Saudis do not want all their assets tied up in oil if oil prices remain low. The upside may not be there. So selling part of Saudi Aramco and buying other assets make sense. This also means that Saudi Arabia is shifting away from the reality in which it has operated since 1973. It is looking for a new model where the assumption that an oil-based economy will solve all problems no longer holds true.

This is on the same order of magnitude as the change in China. China used to depend on its exports. Now it will have to find a new way to operate. Neither China nor Saudi Arabia can depend on the economic model it had adopted. Recent events haven’t created this reality, merely made it obvious.

Another massive exporter is Germany. It’s the fourth-largest economy in the world and almost 50 percent of its gross domestic product comes from exports, half of which go to Europe and half to the rest of the world.

Germany is even more dependent on exports than China was. And many of its exports can’t be tracked. They are components that are part of an extended and complex supply chain. It is hard to tell who the final customer is.

So far, German economic growth has slowed but has not yet declined. That tells us that the story is not over with China and Saudi Arabia. There is a final class of economies—massive exporters in relatively well-balanced economies—that still have not had to face the crisis.

Germany is the leading figure here. And if the fourth-largest economy in the world, a country that cannot absorb all it produces, moves into economic crisis and must change its behavior, the cost will rival that of the shifts in China and Saudi Arabia.

Germany is the powerhouse of the EU and the fourth-largest economy in the world. But the truth is, the Germans are facing a profound crisis—and there's no way they can prevent it.

When the storm hits, its effects will be felt in the US and around the globe. Investors worldwide will be left running for cover… But you can get an early warning and be prepared with this special report. Claim your free copy right now!