Have you seen the hit movie The Big Short?

It tells the true story of a few clever investing pros who made a killing during the financial crisis.

They figured out early on that the US housing market was a house of cards… and placed bets to profit from its collapse.

When it all came crashing down in 2007/8, they walked away with more than a billion dollars profit.

The guys who pulled it off are revered as living legends… financial heroes… investing gods.

Sure, a billion dollar profit is impressive.

But dozens of Wall Street guys make billions on trades every year.

Movies will never be made about them. You’ll never know their names.

They made big profits during a bear market—while most everyone else was losing money.

Have you heard the popular saying, “Everyone’s a genius in a bull market?”

It implies that even a rookie who lacks financial knowledge can profit when stocks are rising.

But when stocks stagnate or fall, most investors struggle to preserve what they have, let alone make money.

In today’s issue, I’m going to show you how to make money this year no matter where markets go.

I’ll explain the two key principals I personally used to generate a 120% profit during stormy markets.

If you’re at all skeptical of where the market is headed this year… or if you’re uncomfortable staking your financial future on the hope that markets will rise… this issue is for you.

A whole year and not a penny of profit to show for it.

But if you check your retirement account balance often, you know it hasn’t been a smooth ride.

Markets climbed most of 2018… then collapsed in the fall.

Here’s how the stock market roller coaster of the last year looks on a chart: 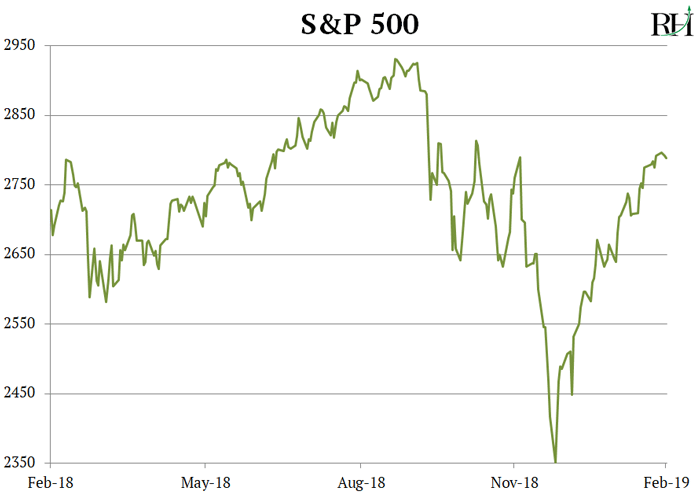 This name may sound familiar to longtime RiskHedge readers. The Trade Desk is one of the first “disruptor” stocks I alerted you to in this letter last June.

The Trade Desk is a little company that’s disrupting the giant online advertising industry. The online ad industry, as you may know, is extremely lucrative. It’s a fast-growing $80 billion pot of gold with very high margins.

But powerful companies Google (GOOG) and Facebook (FB) hog most of the profits.

Through their domination of the online ad game, they’ve grown into the 4th and 7th largest publicly traded companies on earth.

Now look at how TTD performed during the same period: 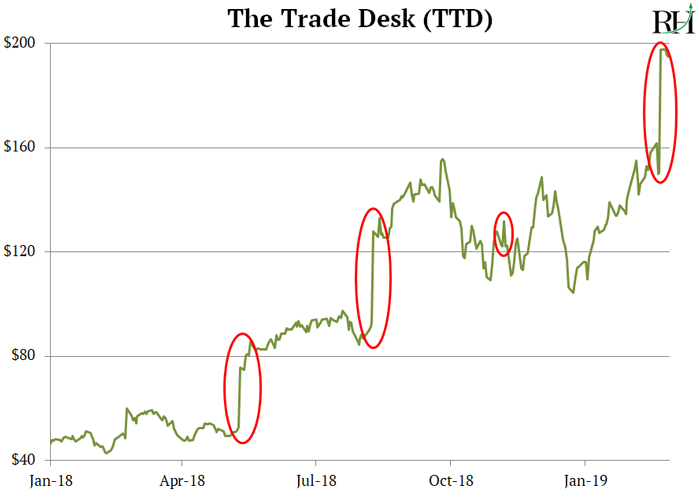 One, TTD has gained 120% since I alerted you to it eight months ago.

Keep in mind, this was while the average investor was losing money in the market.

Two, see those circled parts where the stock jumped?

They mark the times when TTD announced quarterly financial results to the market.

Its profit engine keeps humming no matter what’s going on in the markets.

In fact, over the past eight quarters, TTD has grown earnings at an average clip of 88%.

That is off-the-charts incredible. The average S&P 500 company has grown earnings at a rate less than 8% over this period.

Even mighty Amazon (AMZN) could only muster average earnings growth of 58% in that time.

As I’m sure you know, the 2008 financial crisis tore most of America’s companies to shreds.

The average S&P 500 company’s earnings collapsed by a disastrous 77%.

TTD is a small company disrupting a HUGE market.

Yet it is taking on the $725 billion global advertising industry.

TTD’s sales could soar 1,500% and it would still own less than 1% of its target market.

Which means its stock could double quickly—as it has in the past eight months—and still have plenty of room to triple or quadruple again.

Earlier I mentioned that Google and Facebook dominate online advertising. But their grip is slipping as TTD pries customers away.

Last year four of the world’s largest 10 advertisers boosted their spending with The Trade Desk by over 100%.

Meanwhile, big advertising spenders like Procter & Gamble (PG) are pulling hundreds of millions of dollars from Google and Facebook.

At $8 billion, TTD is still tiny compared to the monstrous companies it’s disrupting.

Google is almost 100X its size!

I sold my shares last Friday when the stock jumped 31% on earnings.

TTD should continue to perform well as it siphons off more business from Google and Facebook. But it’s no longer an early-stage, “under the radar” play.

The company has more than doubled in size since I first wrote about it.

If you’re interested in what I’m buying now I recently took a stake in an early-stage disruptor stock recommended by my colleague Chris Wood.

The stock is named on this page, for free, no strings attached.

It’s our way of getting the word out about Project 5X.

Project 5X is our research service that hunts for early-stage disruptors with 500% or better upside.

As you may have heard, we had closed Project 5X down to new members late last month.

Today we’ve opened it back up.

We have to strictly cap it at 75, because the stocks in Project 5X are often tiny and move fast.

Chris’ January pick jumped 37% in the four trading days after he recommended it.

So you can see why too large a membership base could skew prices.

If you’re interested in becoming a member of Project 5X, go here to get the details.

Even if you’re not interested in becoming a member, you can discover the early-stage disruptor I recently bought, for free, on this page until our 75 membership spots are filled.

Talk to you next week,