Because today, for the first time in 11 years... we’re no longer in a bull market.

US stocks are down 20%+ from their highs... which by the “official” definition, snaps their longest-winning streak in history.

The news coming out today about the coronavirus is surreal. And I won’t sugarcoat it... it’s been brutal for investors. Never before have stocks fallen 20% from their highs this quickly.

If you’re feeling nervous or flat out scared, you’re not alone.

We at RiskHedge have your back. So today, I’m doing something I’ve never done before.

I’m tabling the essay I had planned for you... and I’m going off-the-cuff.

The first is: Big stock market selloffs, like the one happening now, typically follow a predictable pattern.

We’re currently in the most jarring phase—the “indiscriminate selling” phase.

In the “indiscriminate selling” phase, folks panic now and think later. Investors look to sell practically any stock... regardless of whether there’s good reason to or not.

Times like these are highly emotional. So it helps to understand what’s going on inside investors’ brains...

Scientists long ago discovered that losing a significant sum of money triggers “fight or flight” in humans. This involuntary response gives folks the irresistible urge to “do something” about the money they’re losing. This leads to mass-panic selling.

That’s what we’re seeing now, and it can be scary.

The main thing to keep in mind is this “indiscriminate selling” phase is temporary... and it usually doesn’t last long. During the last big sell-off we saw—at the end of 2018—it lasted three weeks and took the S&P 500 down about 19%.

Tomorrow will mark three weeks from when this selloff started. The S&P 500 has already declined 26%.

Before I continue, let me be clear: I am by no means “calling a bottom.”

Looking at how the coronavirus played out in other countries... my best guess is the news will stay bad in America for a while. Stocks could continue swinging wildly for another week or two or more.

But this craziness WILL end... and it will end sooner than most folks think. So our job now is to prepare for what’s next:

In the divergence phase of a selloff, major indexes stabilize. The S&P won’t necessarily recover immediately... it may even continue drifting lower.

But an important change will take place: Moves in individual stocks will start to make more sense.

Investors will catch their breath and realize the world isn’t ending. They’ll move from “indiscriminate sell everything” mode to making more rational decisions.

As I said, the major indexes may not recover at first.

And the headlines will likely remain awful.

But a shift will begin under the surface.

As you probably know, certain market sectors have been truly crushed. Airlines Jetblue (JBLU) and American Airlines (AAL), for example, have both tanked around 50% over the past month.

Anything related to live events—concerts, sports, etc.—has been crushed as well. Last night, the NBA made the unprecedented move of suspending the basketball season. No games means no ticket sales. Live Nation Entertainment (LYV), the parent company of ticket-seller Ticketmaster, has freefallen 36% in the past week alone.

And I haven’t even mentioned hotels—Marriot International (MAR) has tanked 35% over the past three weeks, and Hilton Worldwide (HLT) has plunged 32% over the same timeframe.

They’re few and far between, but they are out there.

“Stay at home” stocks are also chugging along despite the selloff.

As my colleague Justin Spittler has pointed out, Zoom makes software that allows folks to conduct virtual “meetings.” As I write, it’s around breakeven today.

Shares of Teladoc (TDOC)—a company that lets you talk with your doctor from the comfort of your home—has surged 48% since the coronavirus was first reported in December.

We’ve been talking about this at RiskHedge a lot over the past couple weeks because the opportunity is so big.

And streaming stocks aren’t just the best “stay at home” stocks to own during this phase. I believe they’re some of the best stocks to buy right now PERIOD.

Look, a lot of damage has been done to investor psyches over the past three weeks. I think markets will remain choppy for a while. The “easy money” bull market, where practically all stocks go up, probably isn’t coming back anytime soon.

But make no mistake... markets are already starting to diverge into winners and losers. And streaming stocks are, hands down, set to be the biggest winners. For example, Netflix is virtually flat on the year, while the average stock has lost 20%!

He just uncovered a tiny “superdisruptor” unknown to 99% of the world. Soon, Chris says Netflix, Disney, Amazon, Apple... and all the other rich streaming giants will be beating down its door.

Now, I know it’s hard to think about buying stocks right now in the midst of this brutal sell-off. But truth is: Now and the weeks ahead may well be the best opportunity you ever see to get into disruptive stocks at bargain-basement prices.

Because this specific streaming opportunity is so time sensitive, I called up Chris yesterday to get the details for you. You can watch our exclusive interview here or by clicking on the image below. 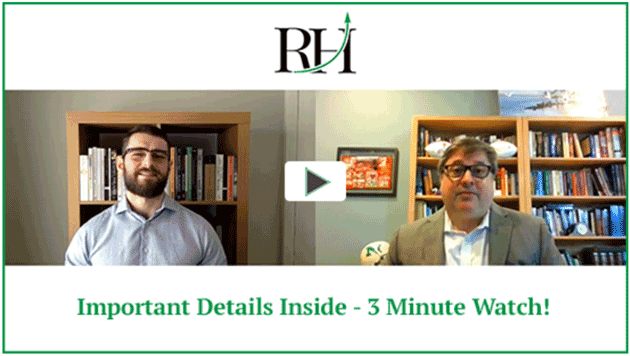 At the very least, you owe it to yourself to hear what Chris has to say. This way you can decide for yourself if this opportunity is right for you.

Remember, while things are scary right now, it’s important to keep in mind that this cycle is following a predictable pattern.

I look forward to guiding you through the weeks and months ahead.