You can’t escape it…

It’s plastered across the news…

And if you get too caught up in it, it will cost you a fortune…

“Who will win the streaming wars?” 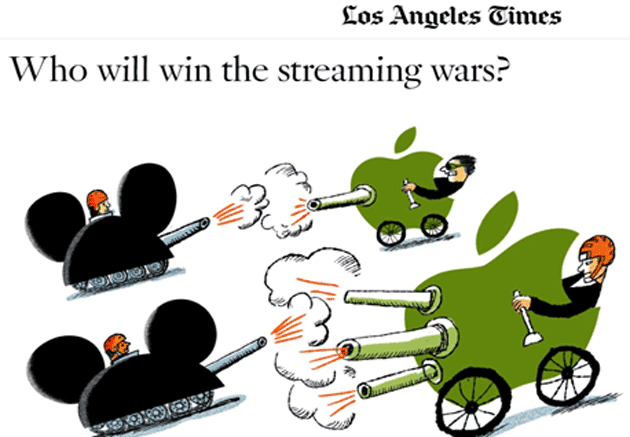 If you’ve been following my work for long, you know the mainstream media has a habit of being dangerously wrong when it comes to investing.

This time, they’re worse than wrong.

They’re not even asking the right question!

As I’ve been saying for years, streaming TV is hands-down one of the most disruptive megatrends since the internet. It will mint thousands of new millionaire investors… and it’s just now shifting into high gear.

But folks who obsess over picking a winner between Netflix/Disney+/Apple TV /YouTube TV/Amazon Prime Video are making a costly mistake.

In today’s issue, I’ll show you the question you should be asking about the red-hot streaming sector...

And how it could put tens or even hundreds of thousands of dollars in your pocket.

In the 1990s, AOL dominated the market for dial-up internet. In fact, it gave most American households their first internet connection.

AOL was the heavyweight in the battle of “internet service providers.” It competed with the likes of Earthlink and NetZero—remember them?

Folks who wasted time worrying about AOL vs. Earthlink let the opportunity of a lifetime slip through their fingers.

They asked: Which companies will solve the internet’s biggest problems?

For example, do you remember how hard it was to find information before Google (GOOG)?

The internet was an unorganized mess of webpages. You could spend hours on a wild goose chase and never find what you were looking for.

Google essentially organized the internet. Through its search engine, we can now find practically anything in seconds. 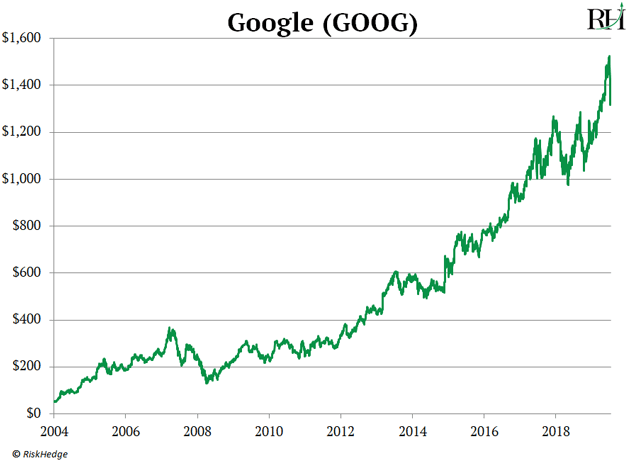 And do you remember how impractical online shopping was in the early days of the internet?

It sometimes took weeks to get your items.

Now, thanks to Amazon (AMZN), you can order golf clubs in the morning and be hitting balls on the driving range that evening!

Like Google, Amazon solved a big, new problem that limited the internet’s potential. It would hand early investors gains of 120,000% in the process: 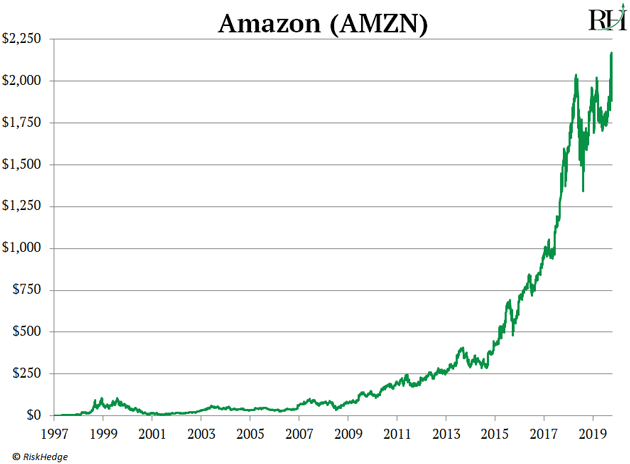 The same exact pattern is playing out in streaming.

Since TVs were invented in 1927, they’ve been one-way “dumb boxes.” Meaning, they blare video and sound into your living room, and that’s it. You couldn’t interact with a TV like you could a smartphone connected to the internet.

That’s all changing before our eyes. Think back to when your cell phone was “dumb.” It could make calls and send texts, and that was about it.

None of these powerhouse businesses would exist without internet-connected smartphones.

As streaming TVs connect to the internet, a whole new world of possibility is opening up... just like it did with smartphones.

The ones that solve streaming’s problems.

For example, there are more than a dozen streaming services now. They’ve all got their own user interfaces, logins, passwords, and shows. This made flipping through streaming programs a big hassle.

Disruptor Roku (ROKU) solved this problem. Its devices allow you to easily watch streaming platforms like Netflix and Disney+ through a regular TV. Flipping through streaming services on a Roku is as easy as flipping through cable TV channels.

As a result, 37 million Americans use Roku’s app. And one-third of all smart TVs sold in the US come with Roku’s app pre-installed.

What other problems need to be solved with streaming?

For one, we’ve yet to figure out a good way for folks to interact with their TVs. Pointing a remote feels clunky. Some companies are working on voice activation... and others believe TVs that sense your movements is the future. But there’s been no breakthrough here yet.

Another is the fragmentation of TV shows. For all its flaws, cable did put most TV programs under one roof. What happens when Netflix owns the rights to air the Super Bowl... Disney+ claims American Idol... and Apple TV is the exclusive place to watch the president’s State of the Union? Folks will only subscribe to so many streaming services.

The potential here is GARGANTUAN.

As RiskHedge readers know, Facebook and Google got rich through perfecting “dynamic advertising” on the internet.

Dynamic advertising is when different people see different ads based on their interests.

The company that cracks this on streaming TV could be the next 50 or 100 bagger.