There’s a new chapter in the ongoing tale of IMF incompetence. Take a look at this UK Telegraph headline that recently caught my eye. 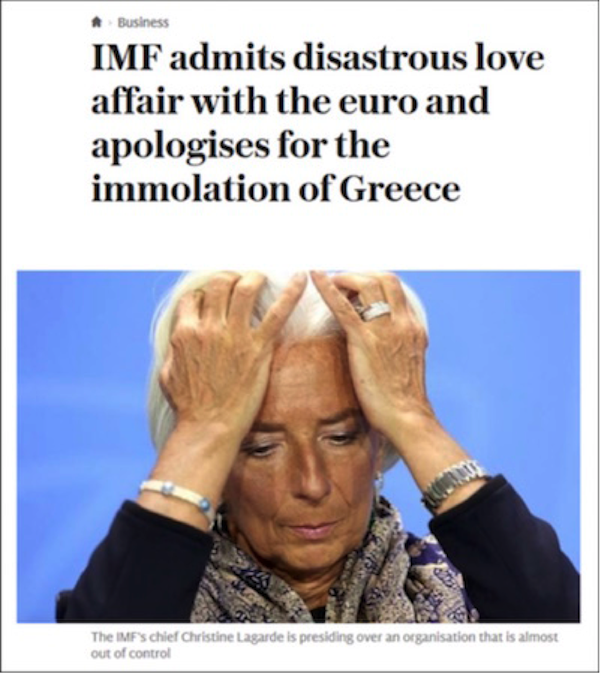 The love affair was no surprise. Nor was the fact that the IMF had taken part in the immolation of Greece. No, the surprise was that the IMF would publicly disclose the extent of incompetence and massive rule breaking that had taken place.

The Ambrose Evans-Pritchard byline told me this would be a good story. Here’s his lead:

The International Monetary Fund’s top staff misled their own board, made a series of calamitous misjudgments in Greece, became euphoric cheerleaders for the euro project, ignored warning signs of impending crisis, and collectively failed to grasp an elemental concept of currency theory.

This is the lacerating verdict of the IMF’s top watchdog on the fund’s tangled political role in the eurozone debt crisis, the most damaging episode in the history of the Bretton Woods institutions.

Ambrose knows how to turn a phrase. “Calamitous misjudgments” is a good way to describe the way the IMF, along with the EU and ECB, has handled the sovereign debt crisis. A crisis that remains unresolved even now, six years later.

A report from the IMF's internal audit department (IEO) describes an organization for which dysfunctional would be a compliment. The massive bailouts of Greece, Portugal, and Ireland broke the agency’s own rules. They also arguably enriched those who caused their countries’ ills while further punishing the victims.

The IMF carried on with its disastrous policies anyway. Internally, we know there was huge debate about the bailout process. Clearly, many in the IMF knew that what they were doing was wrong and that their actions could cause a crisis.

Looking at why the leadership decided to do inappropriate things tells us a lot about the way international institutions make decisions.

The IMF knew the euro had serious flaws

Long before the deluge, some within the IMF argued that the euro system had serious flaws and would eventually fall apart. But those who spoke up were overruled and even punished.

To make matters worse, IMF officials had no plans for handling a eurozone debt crisis because they presumed such a crisis was impossible.

The bias developed because, as Ambrose says, the European elites in the IMF have waged a massive love affair with the euro. And like many in love, they could not see the flaws in the object of their affection… the common currency of the eurozone. To them, it was the foundation of the whole European project.

The IMF-EMU love affair led the agency to accept reports and assurances from eurozone officials at face value, without the same kind of routine verification they demand from less-developed countries.

I suspect those less-developed nations, noting favoritism toward Europe, asked the IMF Independent Evaluation Office to start a probe. The IEO bypasses the bureaucrats and reports directly to the executive board. Once unleashed, the IEO had no trouble finding bias, incompetence, and deceptive dealing.

IMF corruption has left Greece with no good options

These tendencies led the IMF to cooperate in imposing harsh austerity measures on Greece while protecting Greek creditors from haircuts. The IMF was far more concerned about protecting the sanctity of the euro system and the stability of European banks than it was about helping the citizens of Greece.

We can’t know for sure, but it seems likely an orderly debt write-down process would have put Greece back on its feet. This would have spread the pain equitably among the parties. The IMF instead pushed a plan that it knew would never work—or at least many inside the IMF were saying so.

Here’s a sad fact. If Greece had just walked away from its debt, left the euro, and reintroduced the drachma, it would have gone through a very severe depression… but it would now be on its way to recovery.

Instead, Greece is trapped in a more than five-year-long depression that is worse than the Great Depression of the ’30s in the US. And, there seems to be no way out if they continue to follow IMF-imposed mandates in order to keep bailout money coming.

The irony is that at some point Greece may be forced to leave. And that would create an even deeper depression, making an awful situation even more desperate. I truly feel sorry for the Greeks.