But a new, different kind of paper made from hemp was disrupting the market.

Hemp paper was cheaper… and could be grown much quicker.

To shut down this threat, Hearst used his newspapers to demonize hemp’s byproduct—marijuana.

He ran a smear campaign calling marijuana a “vicious racket with its arms around your children.”

It worked. The Federal Bureau of Narcotics outlawed hemp in 1937.

The business of growing, processing, and selling marijuana was conducted in the shadows, illegally.

But as you probably know, the laws are changing.

In 1996 California was the first US state to let folks use marijuana for medical uses. Now a dozen US states have completely opened up the market for marijuana.

Adults in Vermont, Colorado, Massachusetts, Washington, Oregon, and a half dozen other states are free to smoke it for pleasure. I spend a lot of time in Vermont. Hemp stores are sprouting up everywhere.

Even if you live where marijuana is still illegal, you’ve likely heard a lot about “pot stocks.”

Internet marketers have seized the opportunity to promote the heck out of this exciting new industry. If you’re anything like me, ads promising to make you a “pot stock millionaire” follow you around the web.

Longtime RiskHedge readers are asking why I never talk about marijuana stocks.

At a glance, they seem like a disruption investor’s dream...

After all, it’s a multi-billion-dollar market opening up after 100 years in the shadows. It’s forecast to grow at breakneck speed. And big companies are plowing huge sums of money in.

This should spell big opportunity for investors, right?

Before I tell you why, look at the crazy gains marijuana stocks have produced.

Canadian marijuana grower Tilray (TLRY) shot up 400% in less than three months last year, as you can see here: 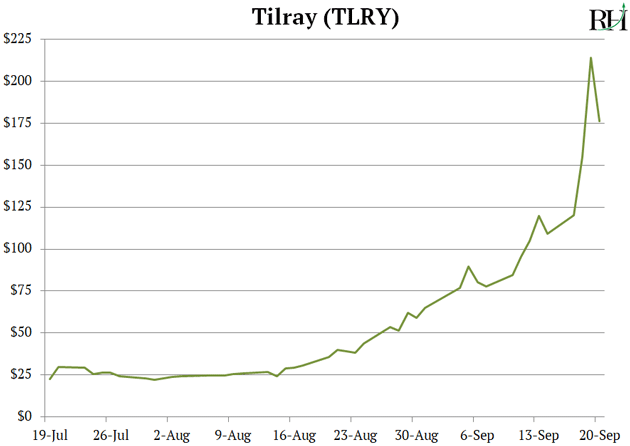 It briefly hit a $20 billion valuation–roughly the same as American Airlines (AAL).

But get this… Tilray only brought in $43 million in revenue in 2018. American Airlines raked in $45 billion!

Dozens of other tiny marijuana stocks, with barely any sales, soared 10x… 20x… even 30x in just a few months.

To understand why, you must look past the stock performance and into the actual business of selling marijuana.

The fact is, most marijuana companies stand little chance of ever making significant profits. Sure, it’s new and exciting. But marijuana is a tough business... and it’s going to get much, much tougher as the market matures.

You see, now that it’s becoming legal, there’s nothing special about marijuana. Like corn or wheat, it’s a crop.

Most people won’t break the law. For decades, only people who were okay being labeled as criminals went into the marijuana business.

Today, there are over 9,000 marijuana “growers” across the US. That’s more breweries than there are in America!

And although only 11 states have legalized marijuana so far, more than 5,000 marijuana stores have opened up shop.

Care to guess how many Walmart (WMT) stores are in the US?

Do you see 5,000 specialty broccoli stores? Or 5,000 carrot stores? No, vegetables sit on grocery shelves and sell for $0.99. Farmers and grocers are lucky to squeeze out a penny or two of profit.

This price compression is marijuana’s future.

Marijuana is a commodity. It’s all roughly the same, no matter where or how it’s grown.

Pot enthusiasts will argue this point. They’ll insist there are dozens of different strains that all make you feel a different way when you consume it. They’ll point out that while the THC in weed makes you feel high, CBD does not.

They’ll emphasize that CBD seems to have important medicinal properties and could one day be a key ingredient in many new drugs. They’ll say marijuana has dozens of uses other than getting you high.

I’m sure all this is true. But it’s mostly irrelevant for investors.

The apple is a versatile fruit. Yet, selling apples is far from lucrative.

At first there were only a handful of growers, so they could charge exorbitant prices.

But according to a state government report, marijuana prices have been cut in halfover the past three years.

What happened? In short, new companies flooded the market. The same report estimated there is enough pot in the state to last for six-and-a-half years!

After much hype, investors have sprinted out the exits. Tilray has plunged 90% in the past year as you can see here: 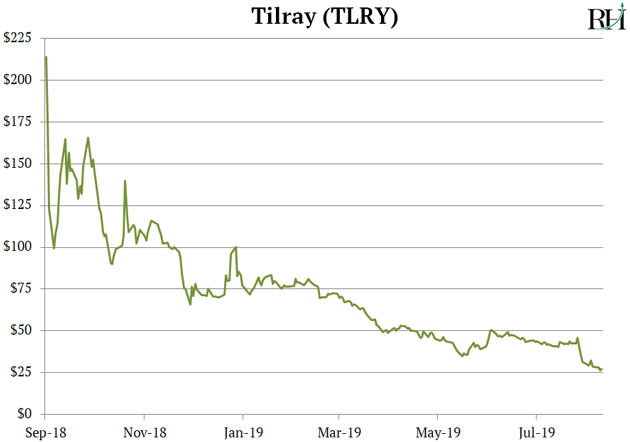 While Canopy Growth has cratered 50% since April; 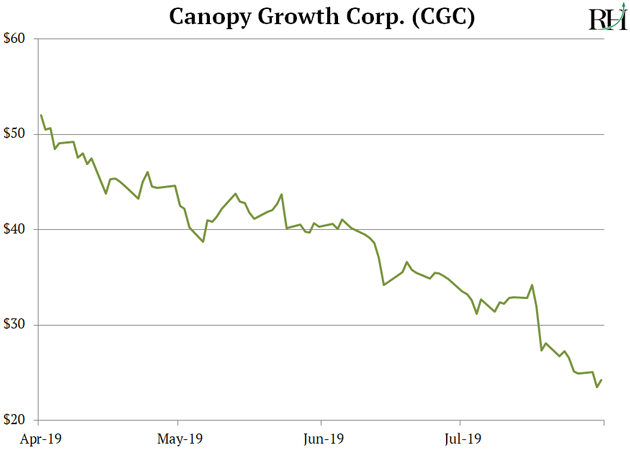 Cannabis shops will continue popping up all over the place. I’m sure big American companies will continue to invest billions in the sector. And I’m sure a handful of pot stocks will defy the odds and go on to achieve big gains.

But make no mistake: the whole marijuana industry is staring down the barrel of price compression.

Pot stocks are no place for disruption investors to put their money.

Have you been burned by pot stocks? Tell me at Stephen@riskhedge.com.