How much money do you need to retire?

Answering this question is one reason a good financial advisor is worth every penny you pay them. But let’s talk about some generalities.

Say you want to stop working at 65. You’re in good health and your family tends toward long lives. You expect to reach 90, having been retired for 25 years.

Will Social Security alone be enough? Probably not.

Let’s do the math… 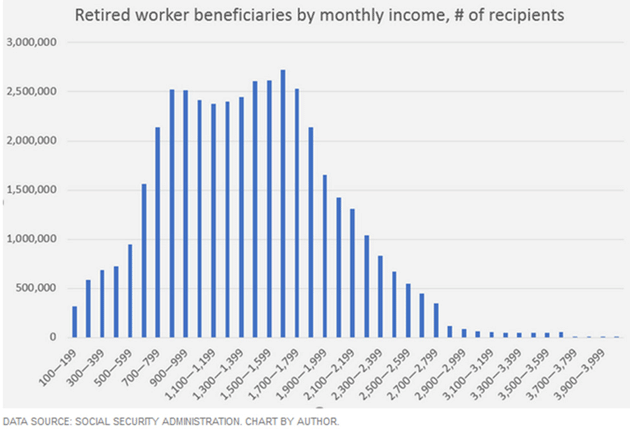 A solid majority of Social Security recipients receive $2,000 a month or less, and many less than $1,000. The average benefit is $1,413, according to Social Security’s latest fact sheet.

If that’s all you have, your retirement lifestyle is not going to include many cruises and golf tournaments.

Of course, it shouldn’t be all you have. Social Security was never supposed to be a complete multi-decade retirement plan. It was designed to keep retired workers out of poverty at a time when lower life expectancies kept retirement much shorter for most—if they lived to 65 at all.

Now we live longer, and we have higher expectations, which political leaders have done little to dampen. Often they’ve done the opposite.

Bottom line: Social Security probably won’t give you much security. You need more.

Is That All There Is?

Ideally, people should avoid relying on Social Security and accumulate other savings as well. Many, perhaps most, do not. The reasons vary.

I suppose some just spend their money unwisely and neglect to save anything. But income data says many Americans can’t afford to both live a typical middle-class lifestyle and save enough to finance a 20+ year retirement.

Average weekly earnings for non-managers are now $779, which is an almost 40-year high. Millions of those now approaching retirement age spent their entire lives earning the equivalent of $40,000 a year, at most.

Little surprise they don’t have six-figure retirement savings. The simple fact of the matter is, it takes enormous discipline to save even 6% for your 401(k) at that income level.

The average IRA balance is not necessarily indicative of retirement savings generally, as many other vehicles exist, but it’s probably a good proxy.

And an average of around $100,000 won’t add much to the mere monthly Social Security benefits. That is not enough for even a minimal retirement.