[Stephen’s note: Last week’s American Disruption Summit was a huge success. A big thanks to the thousands of investors who tuned in from around the world.

In today’s RiskHedge Report, I’m handing the reins to RiskHedge Chief Investment Officer Chris Wood. Below, he explains the secret behind why he’s seeing more “disruptor” stocks with huge upside today than at any time in his 15-year investing career...]

Have you heard the story of the brilliant guy who invented chess?

Legend has it he took the game to the emperor of what is now India.

The emperor was so impressed, he told the inventor to name his reward.

All the inventor wanted was some rice to feed his family… so he made what sounded like a humble request.

He asked for one grain of rice for the first square of the chess board, two for the second square, four for the next, and so on, for all 64 squares.

The emperor agreed. It seemed like a small price to pay for a brilliant invention.

After 10 squares, the emperor had given the inventor just 1,000 grains of rice.

That’s about half an ounce... less than I’d put in a bowl of New Orleans gumbo.

After 20 squares, the emperor had given out about 1 million grains.

After 30 squares, the inventor was entitled to about 1 billion grains.

After 32 squares—the first half of the chessboard—the total was up to about 4.3 billion.

It dawned on the emperor where this was headed.

On the second half of the chessboard, growth really takes off.

After 40 squares, the inventor would get over 1 trillion grains.

After 50 you’re over 1 quadrillion

That’s an impossibly huge number, enough to cover all of India in a meter-thick layer of rice.

All that rice would be worth about $1.96 trillion in today’s money.

The Awesome Force That Sneaks Up on You

The brilliant futurist Ray Kurzweil coined the term “the second half of the chessboard” in 1999.

He used it to illustrate the incredible, almost unbelievable power of exponential growth.

But we’re bad at understanding exponential math. Most folks don’t really “get” what it means when something doubles 64 times. They don’t understand the true magnitude of exponential growth.

It’s happening right under our noses, though…

You see, technology has been improving exponentially for more than 50 years.

Have you heard of Moore’s Law?

Moore’s Law has held true for more than half a century.

For the past 57 years, computing power has doubled about every 18 months.

Which means, we’re now living on the second half of the chessboard.

A funny thing about exponential growth is it sneaks up on you.

In the early stages, you barely notice four grains of rice doubling to eight… or 32 grains doubling to 64.

But over time, the gains quietly accumulate. When you get to “the second half of the chessboard,” where we are now, progress hits a ramp and goes vertical.

Growth accelerates at warp speed… much faster than most folks believe is possible.

Here’s how exponential growth looks on a chart: 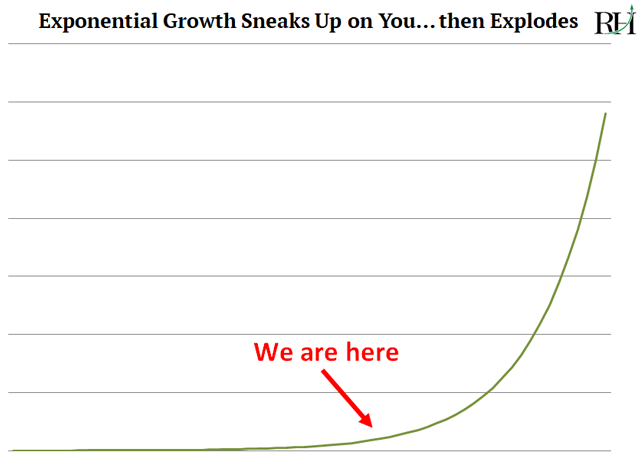 Today, you can buy 10 billion transistors for $1. And they’re better, smaller, and faster than ever.

This is why the smartphone in your pocket is millions of times more powerful than the computers NASA used to send men to the moon in 1969.

But you can buy 24,000 new iPhones for the price of just one of those NASA computers.

Exponential growth is in biology, too.

The Human Genome Project took more than 10 years and about $3 billion to map the first human genome.

How to Get Rich from Exponential Growth

You might be thinking: That’s great Chris, but how do we make money from this?

Take a look at the stock chart of DNA-mapper Illumina (ILMN) just below. This company is the driving force behind the plunge in DNA mapping costs: 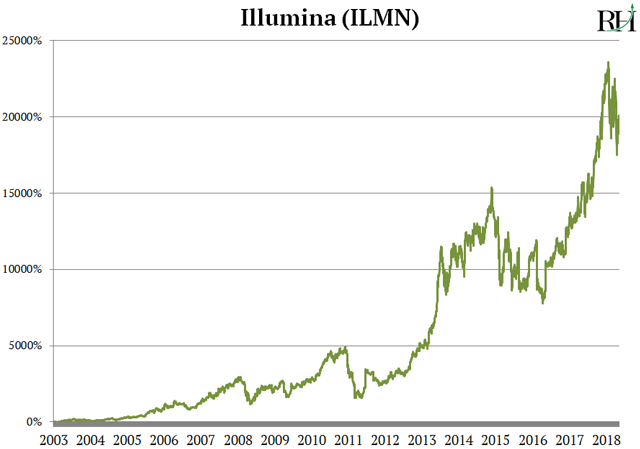 It has handed early investors 20,000%+ gains and counting.

Notice its chart looks a lot like the exponential growth chart above.

Illumina stock achieved small gains in the early stages. Which, thanks to exponential growth, would go on to snowball into life-changing profits.

Or consider Cisco (CSCO), which piggybacked on one of the most disruptive trends in history—the internet.

It provided networking tools that made the internet rollout possible.

And it rewarded early investors with exponential gains that turned every $1,000 invested into almost a million dollars. 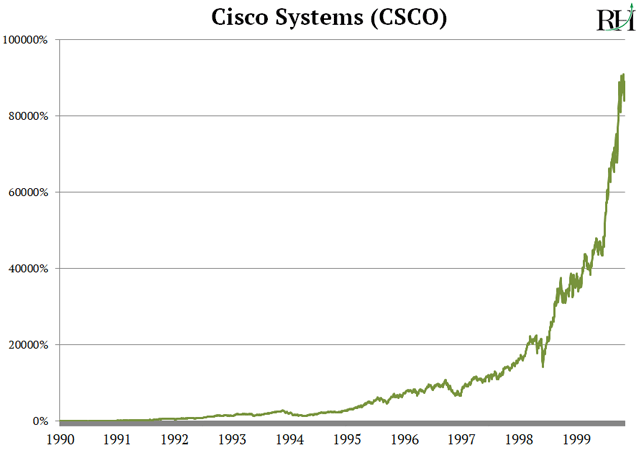 In just the last few years, humans have invented computers that think… built cars that drive themselves… developed cures for some cancers… and figured out how to produce energy efficiently without burning a trace of fossil fuel.

Just imagine what’s coming next as we zoom up the vertical part of the curve.

We’re living in a truly unique time. Exponential progress has opened a whole new world of investment opportunities for us.

Hands down, I see more opportunities to make big gains in exponentially growing stocks today than at any time in my 15-year investing career.

If you missed it, I shared one such stock—ticker and all—at last week’s American Disruption Summit.

It trades for $6 on the Nasdaq.

PS: Have you heard about Project 5X? It’s my new research service where I hunt for exponentially growing “disruptor” stocks with the potential to hand you 500% profits at a minimum. Go here to find out more. Please hurry if you’re interested—your 29% Charter Member discount expires soon.