“It’s busier than Christmas… I’ve never seen anything like it.”

I was chatting with my UPS guy yesterday.

He usually drops off parcels around 4 p.m… but this was after 7 p.m.

Now I’m only doing half the area, but have 140 boxes to drop off!

Millions of Americans are staying at home out of fear of catching the virus.

So instead of driving to stores, they’re ordering everything online.

Walmart (WMT) sold $900 million of groceries online in March alone. A 100% jump over the past year.

Target’s (TGT) internet sales doubled in March… and then jumped another 275% in April!

According to The New York Times, sales of household items on Amazon (AMZN) are 50 times higher than normal. And get this… to keep its giant warehouses stocked, Amazon is hiring 175,000 new employees.

In short, the lockdown is sending online shopping into hyperdrive. Billions of dollars that folks would’ve spent in stores is now flowing through the internet.

The coronavirus has been a boom for many of America’s largest internet sellers. Amazon… Walmart… and Shopify (SHOP) all hit record highs over the past few weeks: 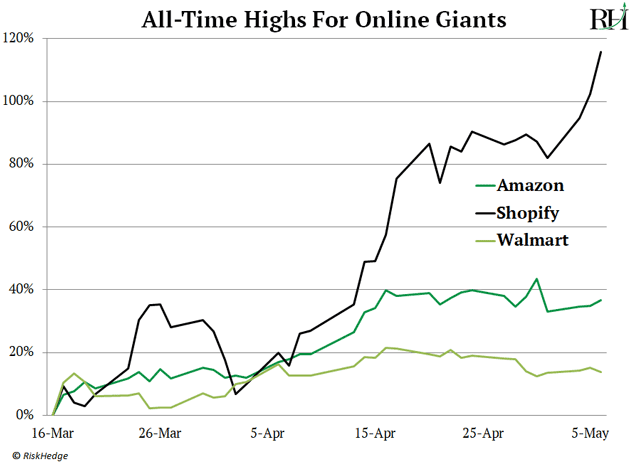 As you surely know, disruptors like Amazon have turned retail stores into an endangered species over the past two decades.

Remember, the coronavirus is likely the most disruptive event in our lifetimes.

It’s hitting the “fast forward” button on disruption. Trends that would have taken a decade to unfold are being shoved into a few months.

And the coronavirus will cull another herd of retailers.

These boring, middle-of-the-road retailers don’t offer anything that folks can’t get online.

As I’ve been telling RiskHedge readers, millions of folks are having an epiphany right now. They pressed a button and a parcel showed up on their front porch a few days later. They’ll ask themselves, “Wow, this is so handy. Why haven’t I always done this?”

And Macy’s is taking on $5 billion in debt just to stay afloat.

That’s just six retailers. You can tack on another $100 billion+ for the thousands of smaller stores across America that likely won’t reopen.

This money is already changing hands from stores to internet retailers.

A lot of investors are piling into popular names like Amazon and Shopify to profit from this shift. In fact, these stocks have been two of the best performers in the S&P 500.

These companies are “the face” of this $200 billion+ disruption. And I think you’ll do well owning them over the long term.

But they aren’t my favorite way to make money from this massive shift.

The best investments are often companies powering disruptive megatrends “behind the scenes.”

Do you ever wonder why internet shopping is so popular?

Sure, you have a better selection online…

Finding bargains is also a plus…

But the “killer feature” is being able to click a button and have the items arrive on your doorstep a few days later.

Imagine having to wait two weeks to get your online order? It just wouldn’t work. In fact, a 2019 Deloitte study found almost 70% of Americans think three-day shipping is too slow.

In other words, speedy delivery is the key driver of online shopping.

And online retailers’ need for fast shipping is fueling a gold rush in warehouses.

Amazon… Walmart… and Home Depot all use giant depots on the outskirts of town as delivery hubs.

For example Amazon moved into its first fulfilment center outside LA in 2012. Now it runs 14 warehouses in the area. Walmart, Target, and others also rent depots in the area.

The thing is… these companies don’t own these warehouses…

Prologis is America’s largest owner and operator of industrial depots. It owns roughly 620 million square feet of warehouse space in the US alone!

And its other tenants include… Home Depot… Walmart… UPS… and FedEx.

In fact, $2.1 trillion worth of goods flowed through its 500+ distribution centers last year. For perspective, that’s larger than the entire Canadian or Italian economies!

You can see here Prologis has tripled the S&P 500’s performance over the past five years: 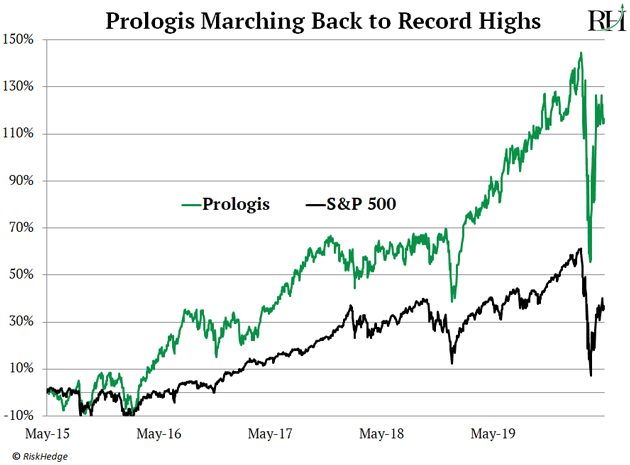 In short, Prologis’ business is booming. Rents have been rising at a double-digit pace since 2014. Vacancies are hovering around historic lows.

And it owns some of the most sought-after space in the world.

In Amazon’s home town of Seattle, Prologis built America’s first multistory fulfilment center. It’s the size of 10 NFL football fields! And has ramps where semi-trucks can drive up and down. 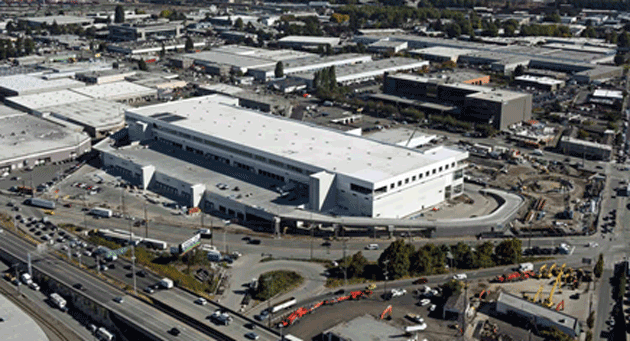 Warehouses used to be the ugly ducklings of real estate.

Buying and selling waterfront condos is a lot “sexier” than dealing with dusty old storerooms.

But the industry has been transformed…

They’re the reason Amazon can offer next-day, even same-day delivery.

In a strange twist of fate, warehouses are essentially replacing millions of physical stores!

This will only pick up steam as the coronavirus sends the disruptive shift from retail stores to online sellers into hyperdrive.

As America’s largest owner of prime warehouse space, Prologis is a stock you want to own for the long haul.