Samuel Dean set up his milk business at just the right time.

It was 1925, and milk was fast becoming a staple of the American diet.

Milkmen delivered glass bottles to doorsteps across the country…

And parents had their kids drink three glasses a day for “strong bones.”

Sam’s company, Dean Foods (DF), cashed in on the heyday of milk. It grew and grew and grew... eventually becoming the largest milk producer in the US.

At the grocery store you’d see whole milk… 2%… skim… and that was pretty much it.

Starbucks (SBUX) recently started offering almond milk, saying “it was one of the most requested customer suggestions of all time.”

The shelves are packed with exotic sounding brands like Almond Breeze and Silk.

Meanwhile cow’s milk sales have tumbled for 10 years in a row.

Many folks still pour a drop in their coffee. But who has a big glass of milk with dinner anymore?

Although the long, slow decline of milk contributed to Dean Foods’ bankruptcy... the business was really handed its death warrant last year.

Walmart (WMT) was the executioner.

For years Walmart was Dean Foods’ largest customer, buying roughly 20% of its milk. Walmart bought 125 million gallons of milk from Dean in 2017!

But last year things changed. Walmart decided to build its own milk plant in Indiana. It cut all ties with Dean Foods in 2018. 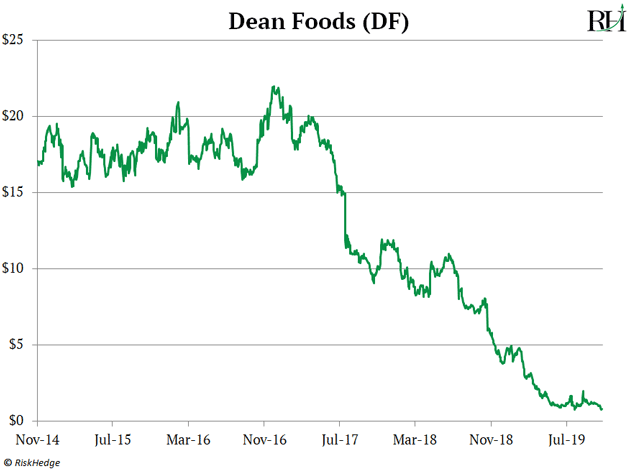 Walmart is the largest grocery chain in America. It has over 5,300 stores across the country. And it’ll sell over $300 billion worth of groceries this year.

Walmart probably doesn’t come to mind when you think “disruption.”

But behind the scenes, Walmart is quietly dominating one of the most important disruptive changes in the US today:

The rise of online groceries.

As I mentioned a few months back, Americans spend more money on food than anything besides housing.

Yet how we buy groceries has barely changed in the last 60 years.

Most of us still drive to the grocery store once or twice a week.

We still push a cart up and down the aisles.

We still place our items on a conveyor belt at the register.

In fact, only 3% of groceries are bought online today.

For years, all attempts to disrupt groceries have failed.

Why? Because food goes bad.

You can throw a book in a brown cardboard box… chuck it in the back of a van… and have the delivery guy drop it on your porch two days later.

As I’ve explained, that doesn’t work for perishables like bananas or milk.

Walmart is using its sprawling network of stores as “mini-warehouses” from which fresh groceries can be delivered quickly, without travelling far.

It recently rolled out its “Delivery Unlimited” membership in 1,500 stores. For 98 bucks/year you get unlimited same-day grocery delivery.

You order your weekly groceries on Walmart.com in the morning... and they arrive at your front door in the afternoon.

Driving home from a long day at work only to remember you need something from the grocery store.

Wouldn’t you rather spend that 20 minutes relaxing, or playing with your kids, or cooking dinner?

For most folks, the time saved from having groceries delivered is easily worth $98/year... even if you only use it a dozen times a year.

And Walmart is pushing the envelope even further. It’s testing a program where it delivers the groceries right into your fridge!

In short, you fit your door with a special lock. When you order online, Walmart creates a one-time code for your door.

The Walmart delivery guy then uses the code to unlock the door. He wears a camera on his chest so you can watch him place the food in your fridge.

The company is testing it in three markets right now, with plans to roll it out nationwide soon.

As regular RiskHedge readers know, there are a few key signs we look for in a viable disruption.

Walmart is already the largest player in America’s $1.5 trillion grocery market. Its big push into grocery delivery will help it grab an even bigger chunk of the market.

Think about it… Walmart’s “thing” was offering everyday low prices.

We all know we can save money shopping at Walmart. But it’s not always convenient to drive across town and shop there.

Now, Walmart will deliver groceries at everyday low prices to your front door…and soon right into your fridge. What’s not to like?

Here’s the thing… Walmart has a store within 90% of US households. This sprawling footprint gives Walmart the ability to deliver fresh groceries to millions of Americans every day.

Keep in mind, Walmart has only launched online delivery in less than one-third of its stores so far. As it rolls it out nationwide, the 40% growth in its online business could easily double.

I’ve owned Walmart stock for a while. It’s shot up 30% this year, and I expect it to climb much higher in the next few years.

RiskHedge Senior Analyst Justin Spittler and I recently got on camera together for the first time.

We broke down his unique new method that identifies “honeymoon” stocks set to hand investors quick profits of 97%, 121%, 139%, or more.

We even “gave away” one of Justin’s top picks... a tiny company called Rubrik.

And Cisco’s CEO recently predicted it will be “one of the hot stocks of the next decade.”

Go here to discover why Rubrik could easily post 300%–500% gains… and hear our whole conversation.

As a heads up, the video comes down soon, so please go here now if you’re interested.