I’ve brought in RiskHedge Chief Trader Justin Spittler to shed some light on a powerful moneymaking force that's sending dozens of stocks to the moon.

If you don’t know Justin yet, you should; he’s got the “midas touch” when it comes to picking winning stocks. He told me about a phenomenon you’ll never hear on the news—but it’s the driving force between many of this year’s biggest winning stocks—including Zoom Video (ZM) and Tesla (TSLA).

It has nothing to do with coronavirus... so read on to get the full story…

Stephen: Justin, first off… I gotta tip my hat.

I’m looking at your premium portfolio. Your subscribers have had a chance to make 220% in two months… 178% in four months… even a 398% win in three months—which falls just short of “quintuple” status.

But you’ve also been nailing some big calls publicly here in the RiskHedge Report.

Genomic stock play Invitae Corp (NVTA) has soared 77% since you highlighted it in late April.

And on February 8, you wrote about teleconferencing company Zoom Video (ZM). It’s gone on to rally 180%—and continues to be one of the year’s top-performing “corona” stocks…

Justin: Thanks, Stephen. But you know, it’s funny… I don’t even consider Zoom a true “corona” stock.

I mean, the coronavirus definitely lit a fire under Zoom’s share price… but it’s not the main reason the stock has gone parabolic this year.

Justin: Well, Zoom actually kicked off its massive rally back in October—more than two months before the first known coronavirus case in the US. It might seem crazy now, but investors HATED Zoom stock back then.

Justin: Yes, but that’s not all I mean by “hated.” Bearish traders were actually betting against Zoom like crazy by “shorting” its stock. Shorting, for folks who aren’t familiar, is when a trader tries to profit from a declining stock.

But then, in October, the “switch flipped”—and a powerful force sent Zoom leaping higher. It spiked 20%+ in a little over a month... and never looked back. It went on to soar 286% in just eight months! 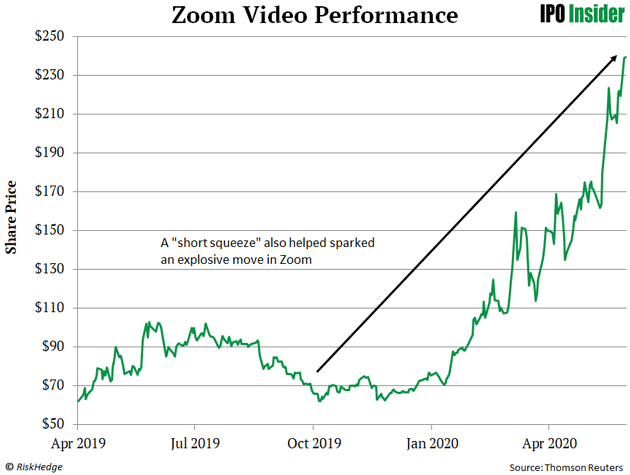 This force I’m talking about is called a “short squeeze.”

Stephen: Can you explain what a short squeeze is?

Justin: Basically, heavily “shorted” stocks are the stocks that certain investors are forced to buy. This is key.

See, most investors try to buy a stock low and sell it higher. Short sellers do the opposite. They sell a stock high, try to buy it back lower, and pocket the difference.

I won’t get into the mechanics here, except to say, “shorting” requires borrowing a stock from someone else and selling it into the market.

Stephen: So in essence, when a bearish trader is “short” a stock like Zoom, he’s sold something he does not own. To close out that trade later on, he has to buy the shares back to return them to their rightful owner.

Justin: Right. And when a heavily shorted stock starts to rise, short-sellers often stampede to buy it back all at once. That’s what caused Zoom to shoot off like a geyser.

Stephen: Wow… you didn’t hear a peep about this in the mainstream news.

Justin: That’s because they attribute everything to corona. You can’t really blame them, they’re not financial experts. And corona certainly played a role. But it wasn’t the whole story.

I mean, the Chinese government didn’t report the first cases of COVID-19 until December 31, 2019! That right there tells you it was a short squeeze that ignited Zoom’s explosive rally—not COVID-19 fears.

Stephen: Sure, it was the hottest stock on earth.

Justin: Right. And as you know, Tesla’s one of the most divisive stocks on the planet. Many investors HATE the company. In fact, back in January, Tesla was the most heavily shorted stock on US markets!

Stephen: But the Tesla bulls got the last laugh…

Justin: They sure did. In March, Tesla started to grind higher. Short sellers were forced to buy Tesla to keep their losses from spiraling out of control. That forced buying turned a run-of-the-mill rally into what traders call a “face ripper” of a short squeeze. Tesla surged 115% in less than two months! 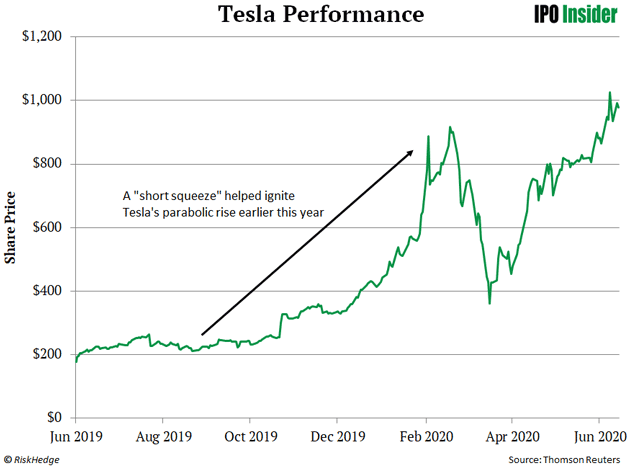 Stephen: And you have a three-step checklist that pinpoints situations exactly like this—where a “hated” stock is about to “flip” to skyrocketing—just like Zoom and Tesla did.

Justin: That’s correct. I’ve been fine tuning it for the past six months and am now sharing it with RiskHedge readers here. In short, it tells me—with mathematical precision—just how hated a stock is… and more importantly, when it’s about to rocket higher.

I look for three clear signals. And all three must click into place before I advise my subscribers to pull the trigger.

Stephen: Can you share one of your signals with us here?

Justin: One of the key things I look for is “signs of accumulation.”

Remember, short sellers must buy back shares eventually. And there’s one surefire sign that a rush of buyers is coming into a shorted stock...

Many RiskHedge readers are probably familiar with a stock’s “volume”—which represents the number of shares of stock bought in a given time period. On a standard stock chart, you’ll often see little vertical bars along the bottom. Those represent volume.

Most people ignore those bars. But you shouldn’t. When these bars get taller, it means more buyers are coming into the stock.

Just as important, big spikes in volume also suggest that “someone big” is loading up on shares. By that I mean hedge funds, institutional investors, or other big money players who often control billions of dollars.

Cybersecurity firm Okta (OKTA) was a clear example of this.

Justin: Yeah, I remember you recommended it back in early 2019. That was a great call. It’s been a monster, absolutely crushing the market.

The volume surge back in 2018 really put the stock on the launch pad…. and it hasn’t turned back: 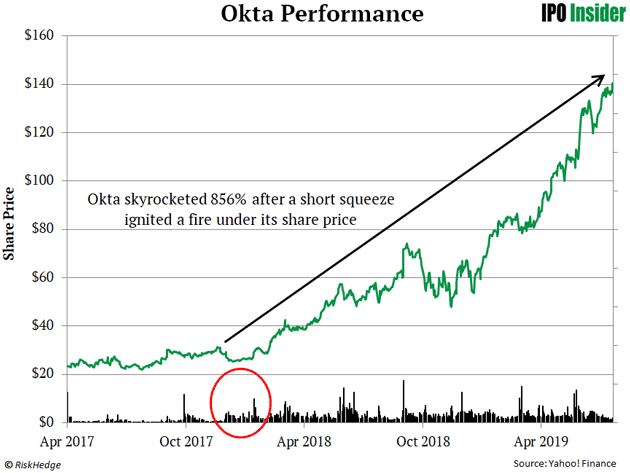 A surge in volume is one of the “clicks” in my system.

I want to see rising volume before entering a short squeeze—because it’s a telltale sign that hedge funds and other big institutions are buying a stock.

Stephen: Alright Justin, we’ve covered a lot of ground here today. And readers who are interested in learning more about your three-step system—including how to access your top five picks—can read a free transcript of your big event here until tomorrow. I highly recommend it.

Justin: Thanks, Stephen. It’s shaping up to be an extremely profitable summer…

And I really want folks to be able to spot these short squeeze setups for themselves. That’s why I laid out all three signals to look for here, and how anyone can start putting on these trades today.

Stephen: Thanks Justin, talk to you soon.