It might just be the best opportunity in American history for this investment.

Will you take advantage of it?

Longtime RiskHedge readers know me as the disruption guy.

It’s my job to study disruptive trends and show you how to make money from them.

And today, I have a “special situation” disruption for you.

This money-making opportunity only comes around once every couple of decades.

The last time we saw this setup, investors made 1,600% gains. The time before that, folks “only” banked 550% profits… in less than five years.

And after just chatting with one of the world’s leading experts on this specific type of investment, I can tell you this once-in-a-generation opportunity is on the table again.

More on that in a minute. But first…

This past week, the US Government started handing out “free money.”

Over 60 million Americans have already received a $1,200 check from Uncle Sam. And there’s plenty more on the way.

The US government passed a historic $2.2 trillion stimulus package to fight the economic fallout from the coronavirus.

And get this… governments around the world have passed $7 trillion worth of stimulus in just the past four weeks!

My friends, the money spigots have been turned on. These are the biggest, most expensive spending packages in history.

It dwarfs what we saw in the financial crisis… and even the Great Depression.

According to Congressional Research, the total cost of WWII was $4.1 trillion in today’s dollars. Yet governments have already agreed to splash out $7 trillion!

Governments have never borrowed and spent this much money.

When folks see governments throwing trillions of dollars around, it triggers a thought in their minds.

If you’re familiar with how our financial system works, you know our money isn’t tied to anything of real value anymore. Rather, the value of the dollar largely depends on politicians making responsible financial decisions.

In other words, there are consequences when governments spend and borrow ungodly sums of money.

And right now, politicians are going out of their way to spend as much money as possible.

Each time this happens, folks worry about the value of their hard-earned savings. And they’re drawn to “real” assets the government can’t just create out of thin air.

In other words, it perks their interest in hard money—like gold.

US government spending started getting a little wild at the turn of the century.

As government spending soared, so did Americans’ interest in gold.

No investor would turn their nose up at 600% gains.

But buying gold isn’t the “special situation” disruption I have to show you.

They’re “leveraged” to the price of gold… meaning when gold moves an inch, gold stocks can move a mile. 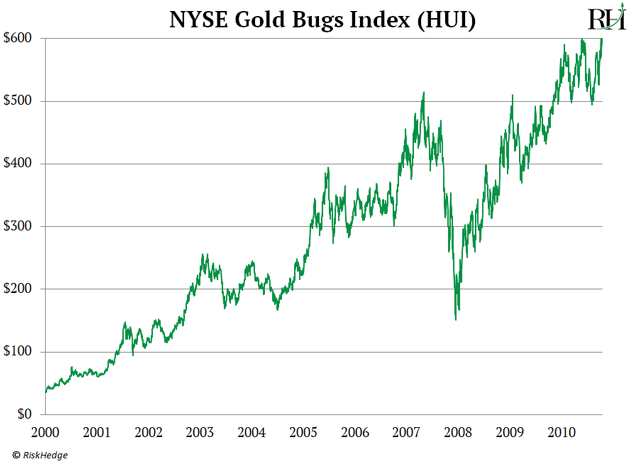 Many individual gold stocks soared even higher during that time.

Do you see the pattern?

When governments start splurging, investors get interested in hard assets like gold. And when gold jumps, you want to own gold stocks.

In short, this unprecedented spending spree is creating a once-in-a-generation speculative opportunity in gold stocks.

And the industry insider I’m talking with—a true legend in the resource space—believes we’re at the start of another big run-up in gold stocks.

Self-driving cars… healthcare disruption… and cyber are much “sexier” than gold.

But don’t let that stop you from taking this opportunity seriously.

I’ll choose profits over excitement any day. And buying gold stocks at the right time—NOW—is one of the best ways to collect big gains quickly.

Gold stocks have exploded for triple—or quadruple—digit gains seven times in the past 48 years.

Today, the cycle just started again… and it could be the most lucrative yet.

By picking the right gold stocks, you can make tons of money.

But finding the right gold stocks isn’t easy. There are thousands. Most are “duds.”

If you’re interested in putting money to work in this idea, my #1 piece of guidance is this: Don’t go it alone. Find a proven expert to guide you.

Marin is a hedge fund manager, New York Times bestselling author, and one of the most trusted and well-connected dealmakers in the resource space. He’s personally financed some of the most successful mining businesses.

Right now, Marin says the stage is set for what he believes are the greatest investment opportunities we’ve seen in a generation.

And he’s personally investing millions of his own money in a small group of stocks to take advantage of this rare window.

Now, because this is such a big—and urgent—opportunity…

During this emergency broadcast, which we’ll air on Tuesday, April 28 at 10:00 am ET, Marin shares:

✔ Why an inevitable surge in gold is coming

You don’t want to miss it.

Go here to reserve your spot.