Have you tried Goldbelly yet?

Goldbelly is “Uber” for iconic eateries across America.

But unlike most delivery apps, which will hurry you a burger or burrito across town…

Goldbelly will ship a fresh smoked salmon bagel from New York to LA!

Take Manhattan bagel shop Ess-a-Bagel… which has become a landmark in New York. Like most businesses, its doors shut when coronavirus came through.

But thanks to Goldbelly, Ess-a-Bagel has shipped over 600,000 of its oversized bagels across the US since lockdowns began. And it’s still shipping 6,000 a day! The bagels are flash-frozen… packed into a box with dry ice so they arrive nice and plump.

Goldbelly has been a savior for many famous restaurants during lockdowns. For example, Philly cheesesteak pioneer Pat’s King of Steaks is delivering “8,500 mail-order cheesesteaks a week.”

Chipotle’s (CMG) burritos are a lunchtime favorite for many folks.

But hardly anyone’s going to Chipotle with America working from home.

Not so long ago this would have bankrupted a fast food joint. But longtime RiskHedge readers know Chipotle bet big on food delivery.

Instead of walking into Chipotle and shouting out your order, millions of folks now order through its smartphone app.

And get this… digital sales tripled during lockdowns. Chipotle sold $828 million worth of burritos through its app in the past three months.

Digital sales made up for almost all of Chipotle’s lost in-store sales. And even as stores reopen, more than 50% of orders are still coming through the app!

In short, delivery saved Chipotle from financial ruin. And also spurred its stock to all-time highs: 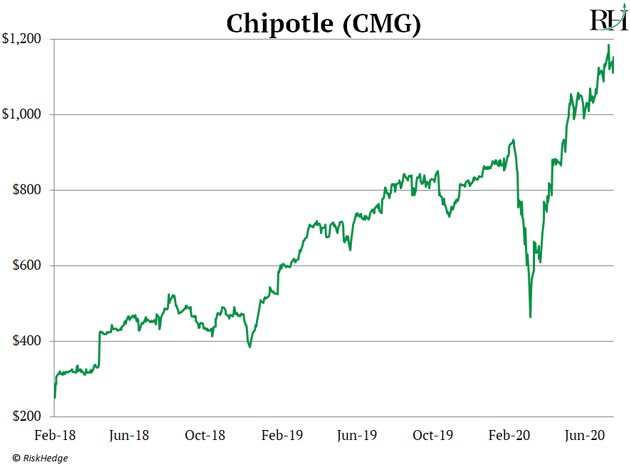 Yet 85% of our spending still happens offline.

In other words, almost everyone is online... but most of the money isn’t.

“But Stephen… we’ve been hearing about surging online spending forever... surely the easy money has been made?”

Not even close. Internet shopping has grown slowly for the past decade. Now it’s growing by leaps and bounds!

And online sales are on track to jump 30% this year, as you can see below. 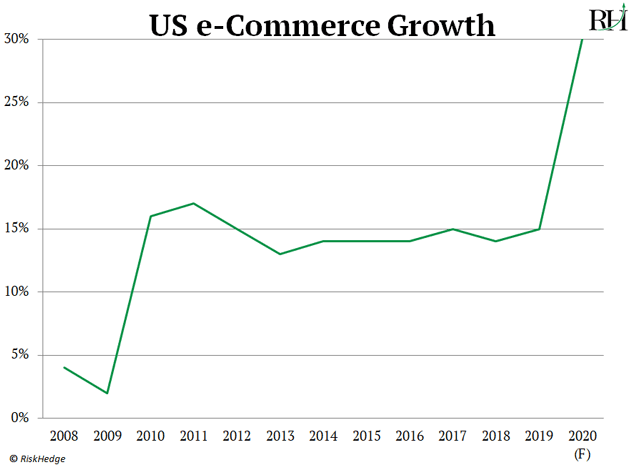 Americans will likely spend $1 trillion online for the first time ever in 2020.

The first wave of business on the internet was dominated by a handful of firms.

Last year Amazon swallowed up 35% of all dollars spent online. eBay… Apple… Walmart, and Home Depot pulled in another 16%.

In other words, more than half of online spending flowed into the pockets of just five companies.

And millions of businesses resisted moving online. Today, 8 out of 10 small businesses don’t even have a website. Until recently, the internet was little more than a side hustle for sportswear giant Nike (NKE).

But that era is dead and buried.

We’ve seen online disruptors triumph during lockdowns. Meanwhile, these past few months have shown us that the businesses not selling on the internet are suckers.

Who could have imagined in January that mailing bagels and cheesesteaks across the country would be a booming business?

Yet Goldbelly’s sales shot up 200% in the past few months.

Regular RiskHedge readers know mom and pop shops are finally shifting online too. Even Nike has come to its senses. One-third of its sales came through its website this past quarter. A target Nike didn’t expect to achieve until 2023!

Thanksgiving weekend always brings out a flurry of shopaholics.

So can you imagine Walmart (WMT) announcing its 5,000+ US stores will CLOSE on Thanksgiving day?

It would be considered retail suicide.

Yet, Walmart made this announcement on Monday. Target (TGT) followed it up by saying its stores will also shut on Thanksgiving.

I doubt it’ll hurt their sales much.

With coronavirus still lingering, Black Friday and Cyber Monday will take place on Walmart.com and Target.com instead.

Within the next decade 40–50% of spending will happen online.

Investors in this second wave stand to make a killing.